Guide to Fastpasses at Disneyland Paris

Disneyland Paris offers Fastpasses for several rides. We wrote this Disneyland Paris Fastpass Guide to help you get the most out of them. Fastpasses reserve a spot in a virtual queue allowing guests to avoid long lines at the attractions where Fastpasses are available. When you use Fastpass, you can enjoy more of both parks as it takes away the hassle of having to wait in lines.

Who can use Fastpasses?

Fastpasses are available to anybody with a valid entrance ticket or an Annual Pass. There is also no additional cost to use Fastpasses. For entrance tickets, there is no difference between multi-day or single-day tickets, or tickets that were bought online, through a travel agent or at the Disney kiosks.

Not each attraction is suitable for the Fastpass system. This is mainly due to the fact that the virtual queuing system requires additional lines to separate the Fastpass riders from the stand-by riders.

Often attractions that can handle a high hourly number of guests will offer Fastpasses. In most instances, these are also really popular attractions. 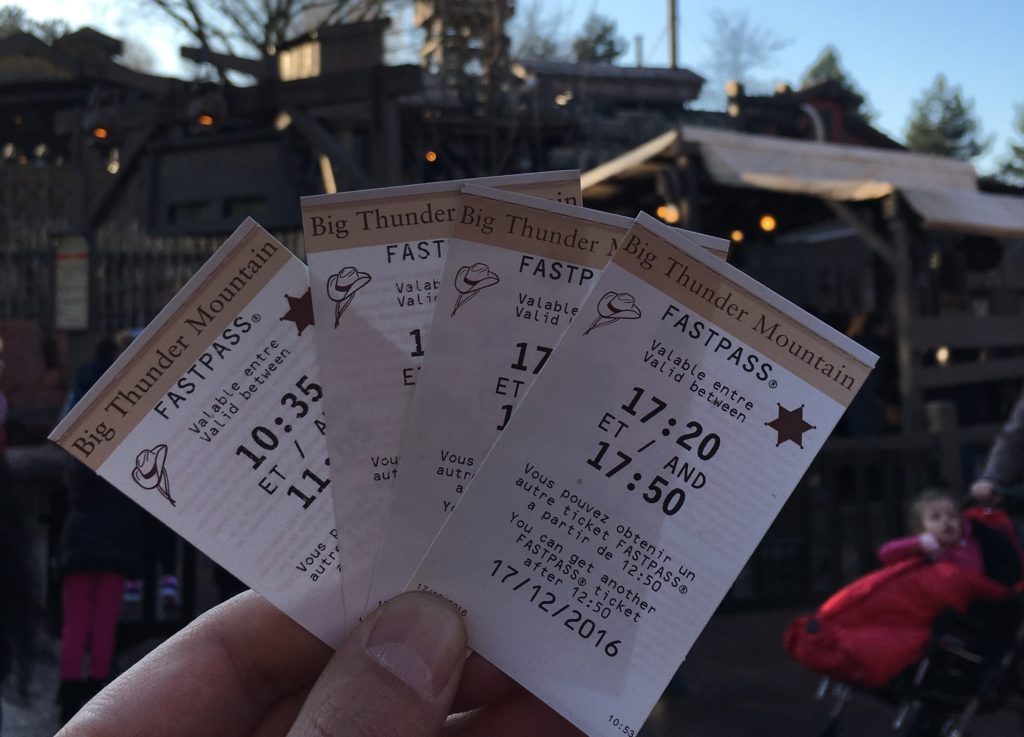 How to get a Fastpass

Walk up to the kiosk and scan your entrance ticket or Annual Pass. The machine will print out a paper Fastpass telling you between which times you need to return, and after which time you can get a new Fastpass. 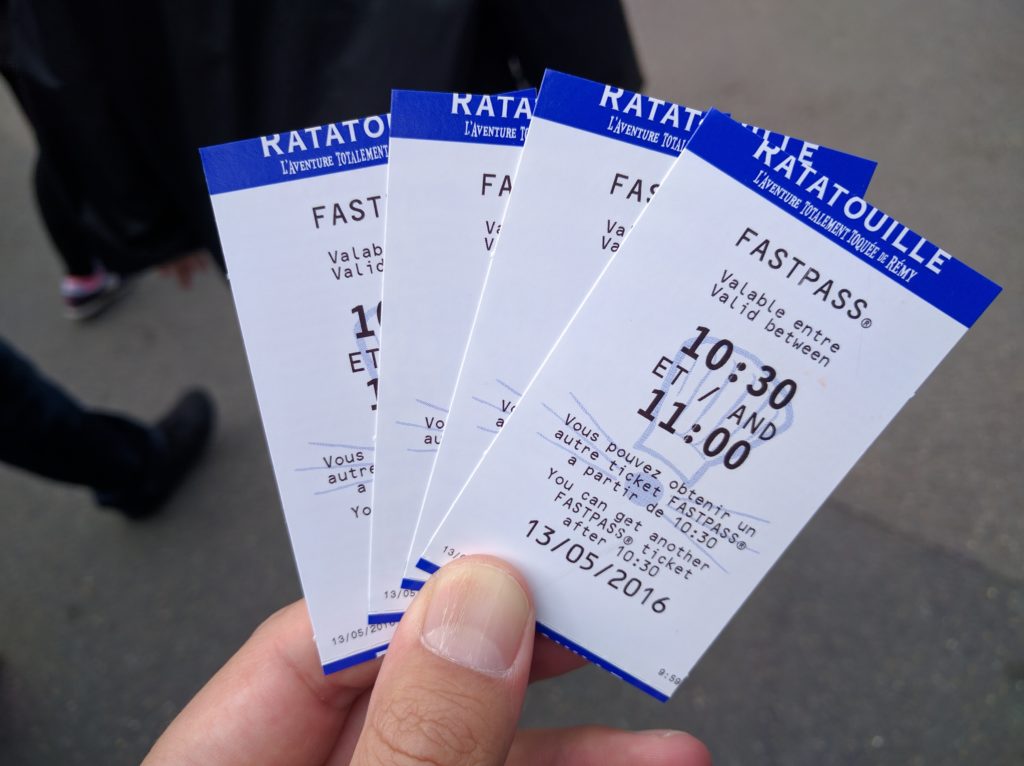 You can only get a new Fastpass when either you have used a previous Fastpass or when the time on the Fastpass for you to get a new one has elapsed. In theory this means you can hold more than one fastpass at a time.

How to use a Fastpass

Make sure you are back at the attraction you have a Fastpass for at the time printed on the Fastpass. Cast Members can not allow for early or late arrivals.

Locate the Fastpass entry and present your Fastpass to the Cast Member. This entry is often located to the normal entry, but for Big Thunder Mountain the fastpass entry is at the far right.

Guests staying at a Disney Hotel are eligible for additional or premium Fastpasses. These special Fastpasses are dependent on the room type and number of guests staying in that specific room.

The VIP Fastpass gives you unlimited access to any ride that has Fastpass. Guests with the VIP Fastpass can directly go to the Fastpass entrance, show their VIP Fastpass to a Cast Member and walk onto the ride.

VIP Fastpasses are available for the following hotels and room types:

As you only receive one VIP Fastpass per person for the duration of your stay, it is important to keep the VIP Fastpass with you at all times and not give it to a Cast Member. The VIP Fastpass could be limited to specific times. Check the times when you receive your VIP Fastpass. 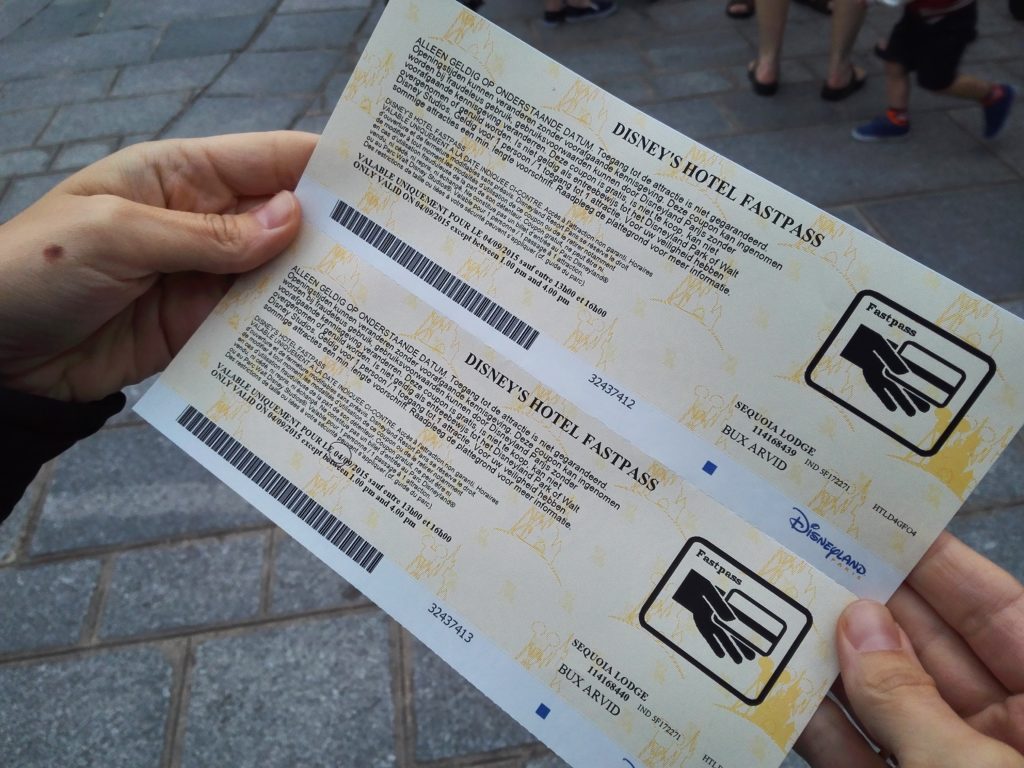 Hotel Fastpasses are available for the following hotels and room types:

Here are some questions on Fastpasses that we have received in the past, with the answers we have given.

Q: Can I pay more to receive additional Fastpasses?
A: No, this is not possible. Shanghai Disneyland offers such a service called Disney Premiere Access. This is the only Disney park where you can buy Fastpasses

Q: Can one person get Fastpasses for an entire group?
A: Yes, as long as that person holds all entrance tickets or Annual Passes, this is possible

Q: Can I park hop with Fastpasses?
A: Yes you can. We noticed in the past that Disneyland Park and Walt Disney Studios are not connected. Meaning that I can get a Fastpass at the other park, even before the Fastpass for the earlier park has elapsed

Q: How long is the window for us to return with a valid Fastpass?
A: This is 30 minutes at the moment

Q: What happens when I return late?
A: When the time on your Fastpass has expired, you won’t be allowed entry through the Fastpass queue. However, depending on how busy it is, Cast Members might still allow you on if you are within 5 minutes of the original time. This however is at the Cast Member’s discretion

Q: What happens when I return early?
A: The Cast Member might have you wait until your return time. Sometimes they will let you in 5 minutes early, this however depends on how busy it is and occurs at the Cast Member’s discretion

Q: What happens to a Fastpass when an attraction breaks down?
A: Unfortunately your Fastpass will expire. You can always talk to a Cast Member to see what is possible

Q: Can I give my Fastpass to somebody else?
A: Yes you can. You can pay it forward

Q: Can I get a Fastpass for tomorrow?
A: No, that is not possible as Fastpasses are only provided for the same day

Still have questions about our Disneyland Paris Fastpass Guide? Let us know! We are glad to help you.

2 thoughts on “Guide to Fastpasses at Disneyland Paris”