On the heels of the excitement surrounding the 25th Anniversary of Disneyland Paris, the
resort is launching a new series of fan experiences, inspired by and created especially for
Disney fans around the world. Disney FanDaze is a series of experiences designed to
entertain and thrill those who know and love Disney better than anyone else: Disney fans.

There is little doubt that Disney fans are among the most devoted, passionate, and
enthusiastic people in the world. Since the inception of Disneyland, the number of fans of
Disney theme parks and their beloved Disney Characters, has grown exponentially. Events,
festivals, and other celebrations held by and for Disney fans occur daily all across the world.

Since Disneyland Paris opened its gates 25 years ago, Disney fans – from all over Europe and
beyond – have been traveling from far and wide to celebrate anniversaries, seasonal
festivities and other special events at the European resort. Thousands of fans come every
year to relive their favorite memories and to make new ones, and many others revisit time
and again to meet Disney Characters and immerse themselves deeper in the stories that
have always delighted and inspired them.

Now is the time to launch entertainment experiences created especially for these Disney
fans.

So if you dream of spending more time with your favorite Disney Characters and you’re a fan of delightful days and dazzling nights, then Disney FanDaze is for you! Stay tuned and follow
us on our Twitter account @DisneyFanDaze account for more details. Each tweet is a date
with Magic that no fan will want to miss.

Disney Fan Daze events will be FAN-tastic – full of fantasy and fun, created for the young and
the young at heart. Stay tuned for more exciting news, coming your way very soon!

The first announcement for a FanDaze day has been scheduled for October 1. You can stay up-to-date via Facebook. 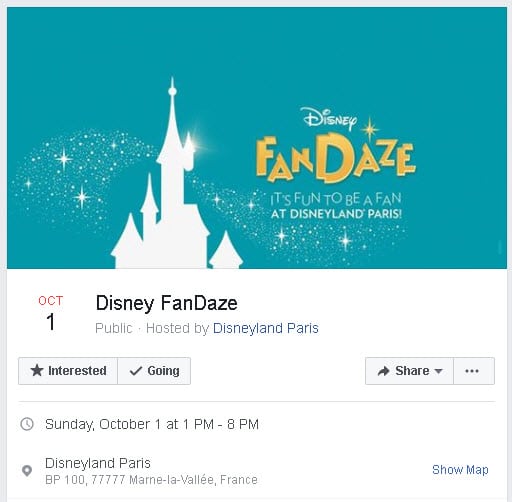