Continuing the series around trains at Disneyland, today we are going to travel the journey from Main Street Station to Frontierland Depot.

Portal between what is real and what is imaginary

The starting point of our journey is Main Street Station. More than a station, it is a true portal between what is real and what is imaginary. 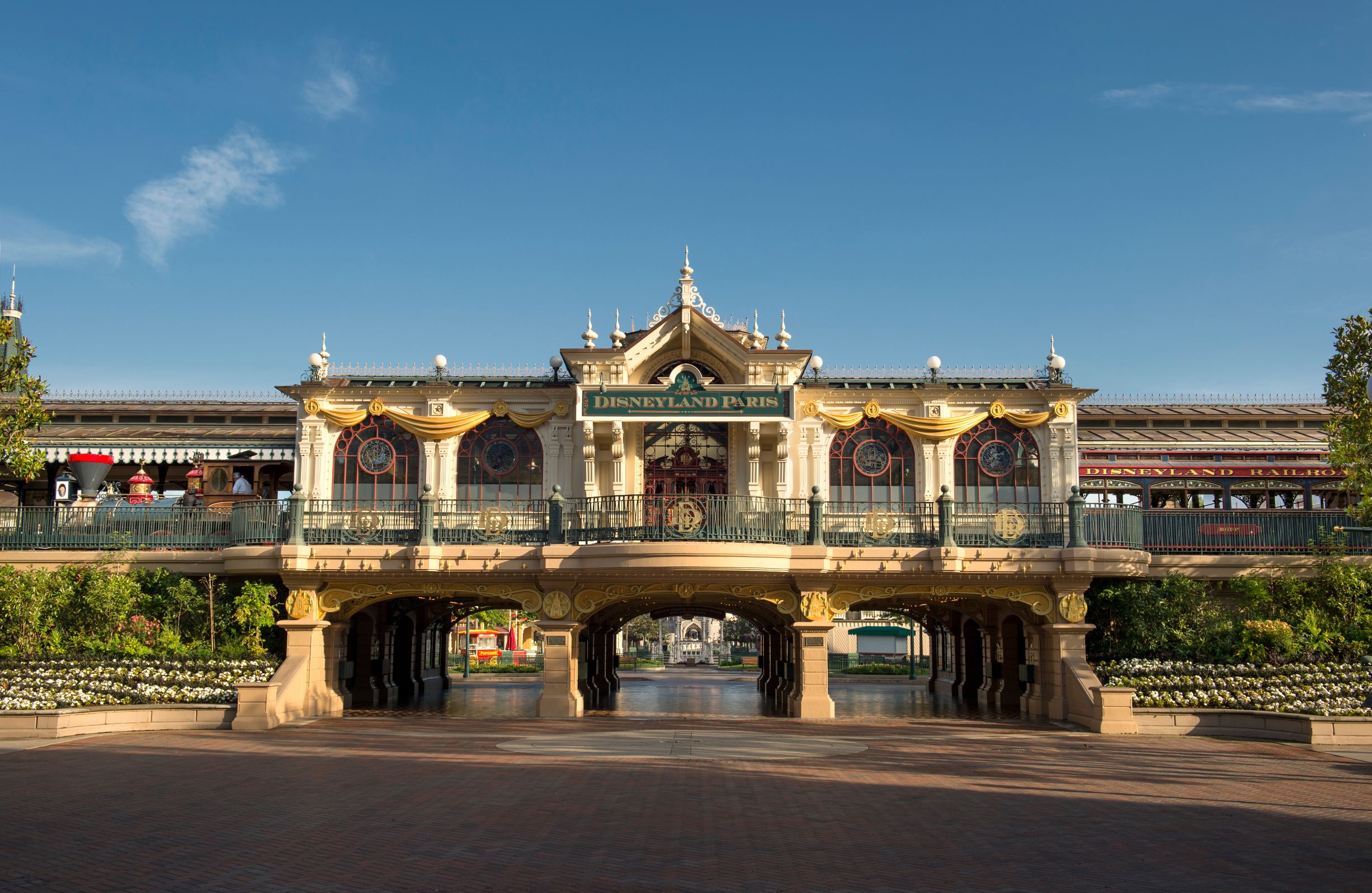 In reality, its Victorian architectural style matches the elegance of Main Street, U.S.A. and particularly the Plaza Gardens Restaurant located at the other end of the street. Its history is closely linked to the railroad’s development. There are even metal staircases directly inspired by New York’s elevated, late 19th century train tracks.

As for the imaginary side, it readily borrows from other Disney Parks while enhancing Disneyland Paris’ specific history. The station’s structure, surrounding the train on either side, owes much to Disneyland Resort’s “it’s a small world” attraction, where the Disneyland Railroad passes between the clock tower and the main building, a detail also found at Disneyland Paris. It is also inspired by the Monorail station inside Disney’s Contemporary Resort at Walt Disney World Resort in Florida. 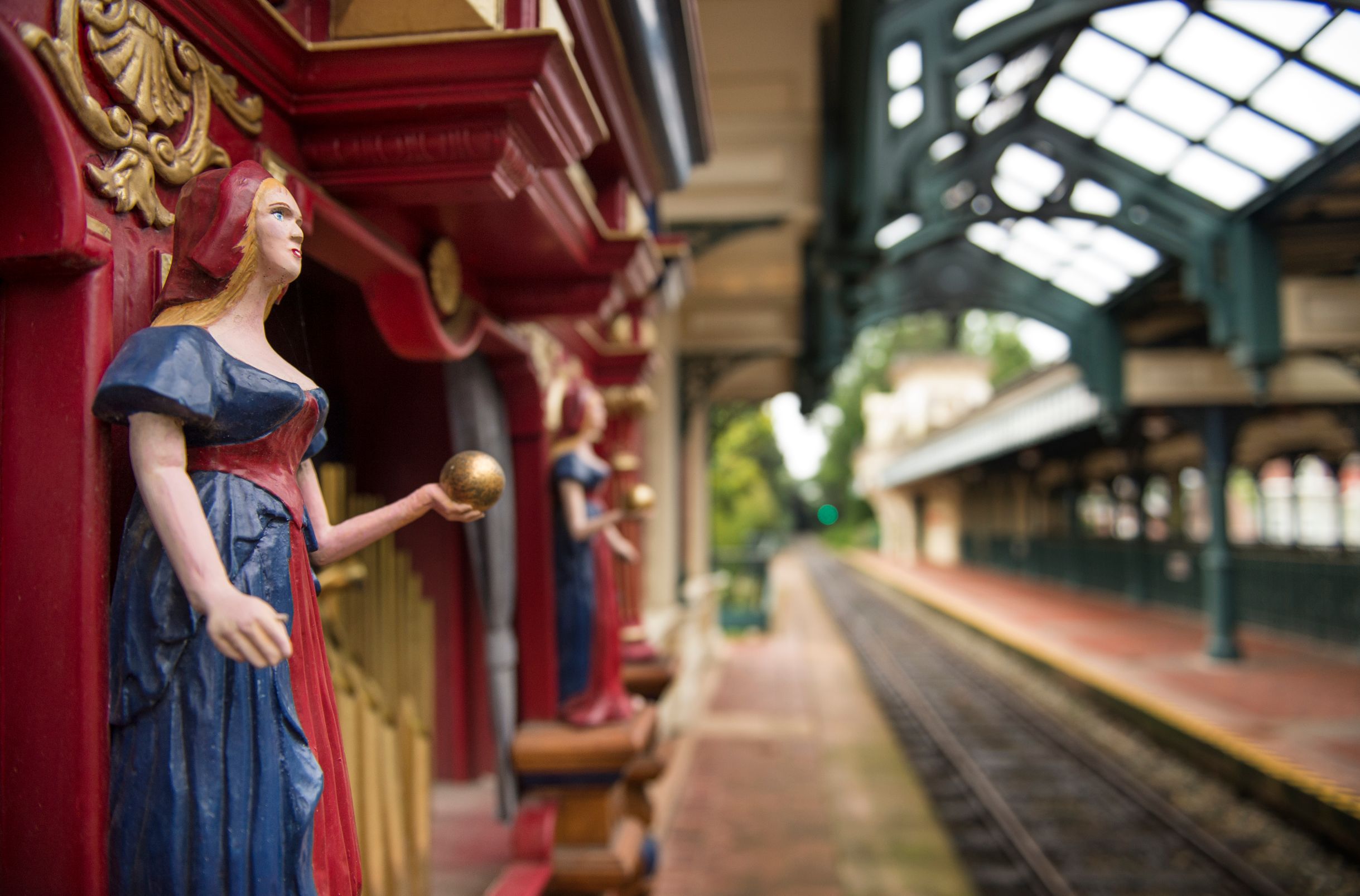 Here, Main Street Station is a royal road for discovering the different destinations in Disneyland Park. Posters and stained-glass windows featuring the different Lands are invitations to travel, a taste of the experiences that await explorers. These were designed by Eddie Sotto, who himself was inspired by the striking paintings in the restaurant Le Train Bleu at Gare de Lyon, representing the different stages of the journey that awaited passengers on the Paris-Lyon-Marseille train route during the Belle Epoque. 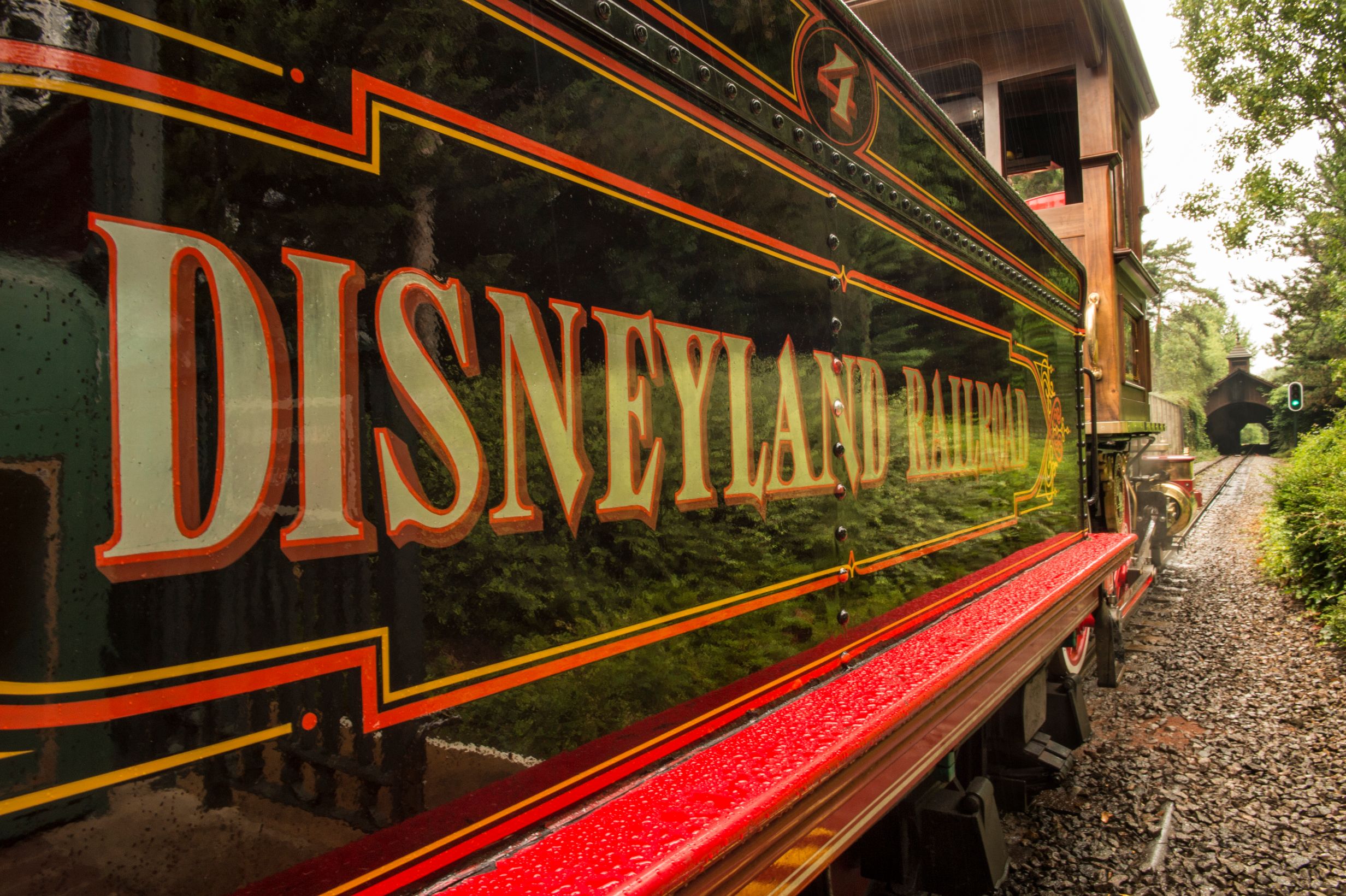 On the Pioneers’ Trail

Moments later, we enter the tunnel that houses the Grand Canyon Diorama, making the transition between Main Street, U.S.A. and Frontierland. This vast panorama, nearly 80 meters long, presents different aspects of the spectacular UNESCO world heritage site. We discover wildlife (more than 40 animals), flora and ancient Amerindian Troglodytic dwellings, as the sound and light effects – such as a storm and a rainbow – complete the realism of each detail.

The Grand Canyon Diorama was inspired by both the Oscar-winning 1958 Disney short film Grand Canyon and the diorama built the same year at Disneyland Resort. The Imagineers in charge of the project for Disneyland Paris, under the direction of Jeff Burke, visited the backstage when they went to see the original plans of the American model there. To create the diorama, they also used the music common to both the film and the attraction, the Grand Canyon Suite by American composer Ferde Grofé (1892-1972). More specifically, they used the segment “On the Trail,” performed by the Graunke Symphony Orchestra – now known as the Munich Symphony Orchestra – which had also recorded the music for the “Peter and the Wolf” segment of The Music Box (1946). 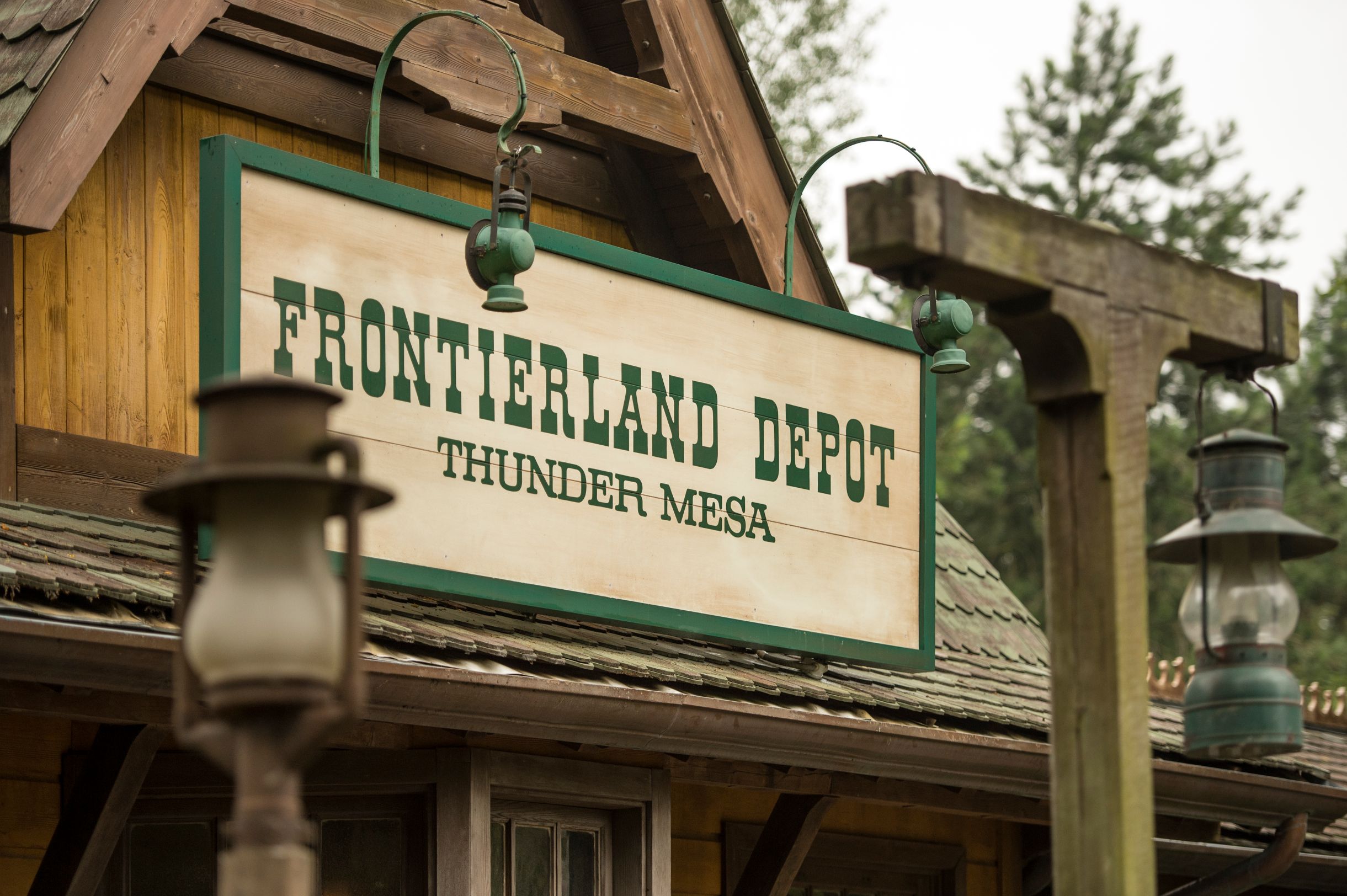 Following our drive along the breathtaking scenery of Rivers of the Far West, here we take a pause at Frontierland Depot. As the name suggests, the Frontierland stop is not a train station, per se. It is a depot where trains can stop to refuel and restock on water – thanks to its water tower with a capacity of over 7,000 liters – enough to provide steam for three laps around the park! 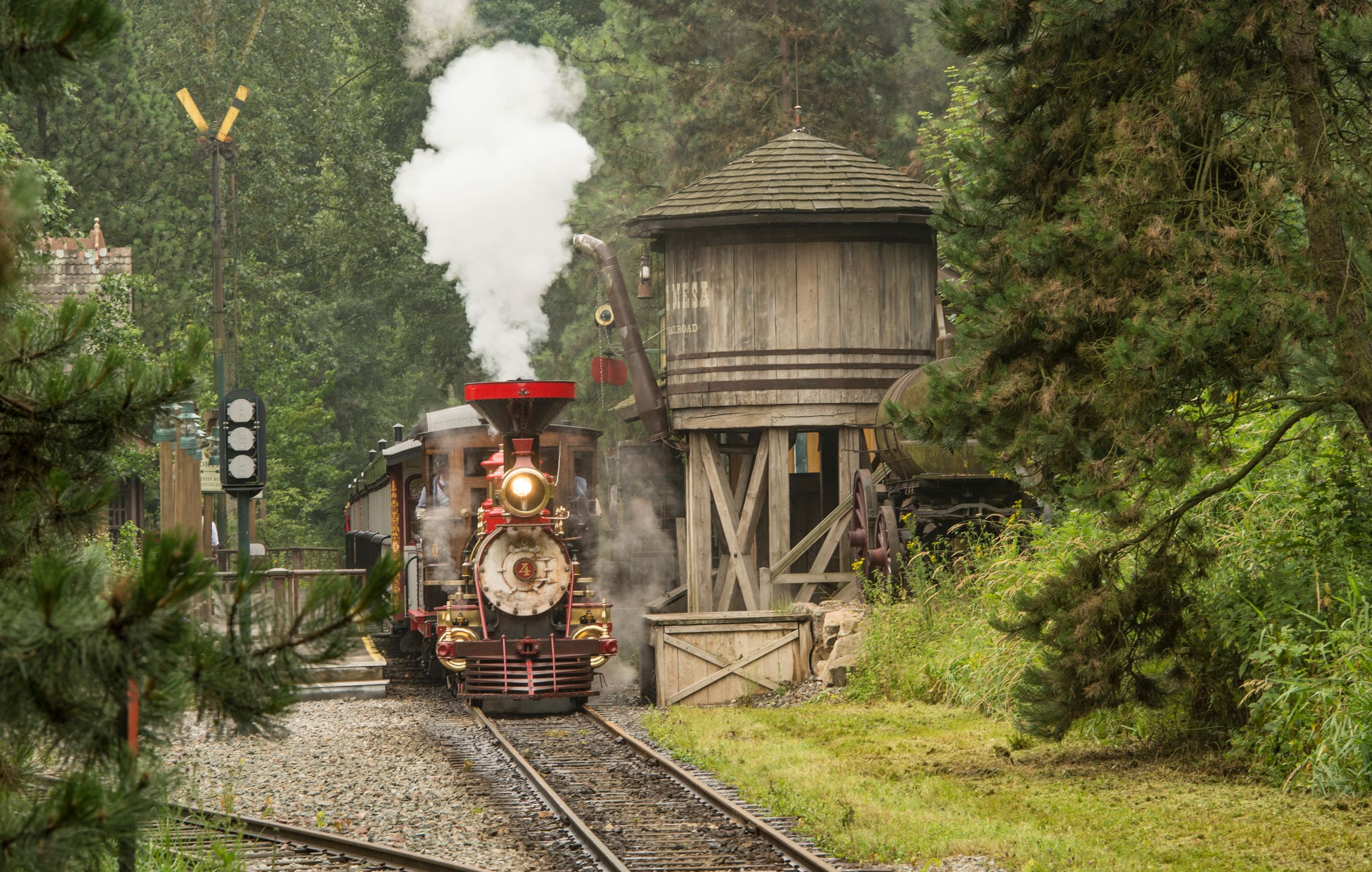 Frontierland Depot is conveniently located on the edge of Cottonwood Creek Ranch. At the time of construction in 1865, its location facilitated cattle movement from the barn to the cattle cars. Today, the Disneyland Railroad carries only passengers, but the old Critter Corral and barn-shaped Cowboy Cookout Barbecue restaurant visible beyond the station are reminders of its original function.

Thanks to the collaboration of architect Ahmad Jafari and designer Pat Burke, Frontierland Depot is almost an exact replica of the very first Frontierland Station at Disneyland Resort in California. It is a way to bring back to life this historic site, transformed in 1966 for the opening of New Orleans Square. Like its California counterpart, as you pass the controller’s desk, you can still hear in Morse code the first words Walt Disney spoke during his inaugural speech for the opening of Disneyland on July 17, 1955: “To all who come to this happy place, welcome!” Quite a symbol! 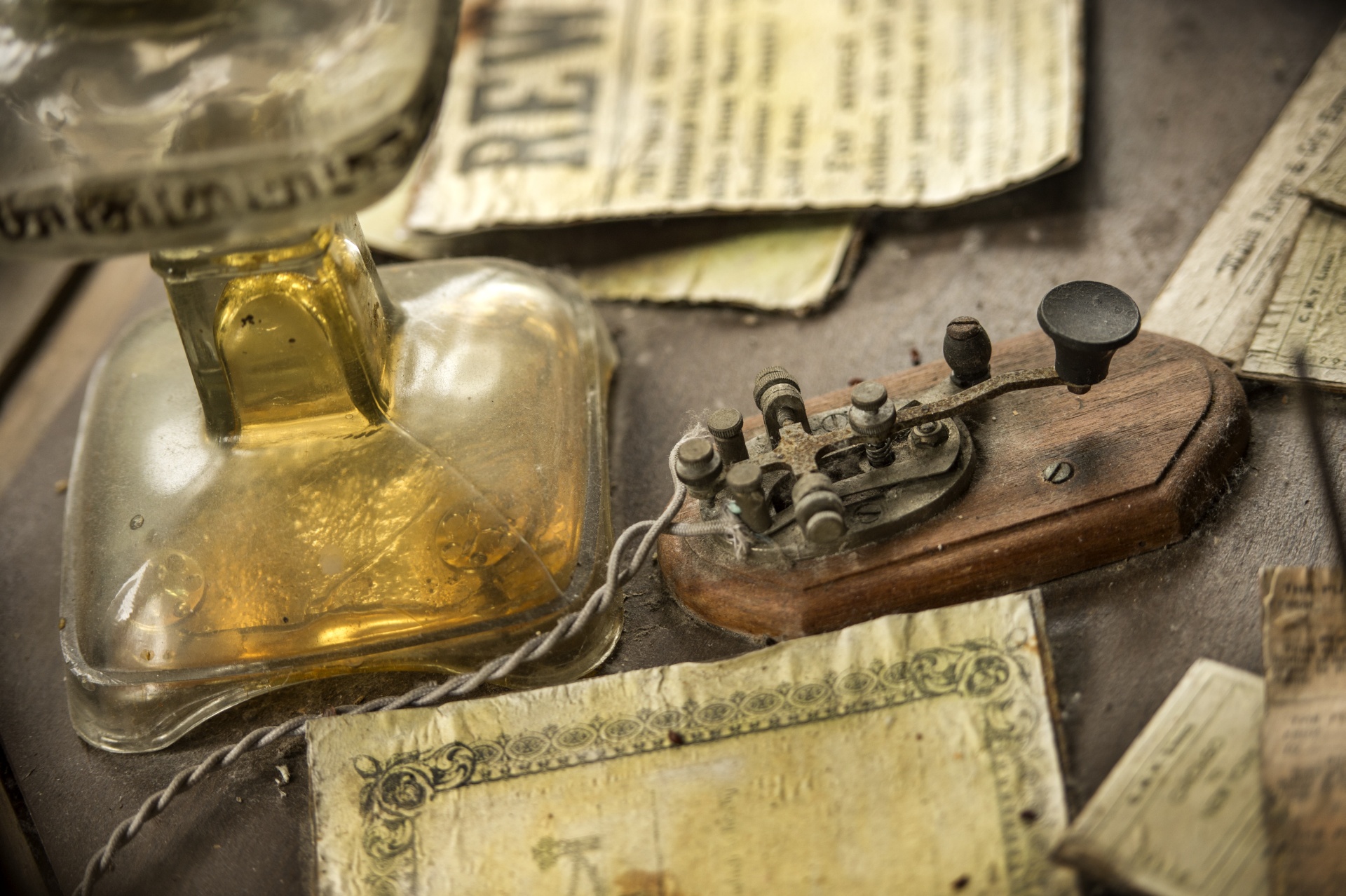