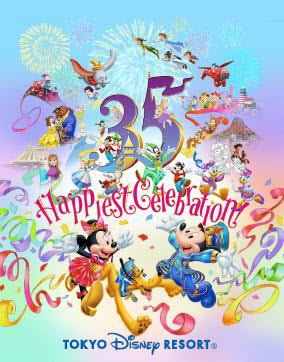 Kicking off the celebration at Tokyo Disneyland Park will be the premiere of “Dreaming Up!,” a brand new daytime parade, and the reopening of the iconic attraction “it’s a small world” after being temporarily closed for extensive enhancements.

In summer, “Celebrate! Tokyo Disneyland” will premiere. This new nighttime spectacular at Cinderella Castle will feature more new effects and a grander scale than ever before. A special theme song created just for the 35th Anniversary will be used in various programs.

Over the anniversary year at both Parks, Guests will find elements of “Tokyo Disney Resort 35th Anniversary ‘Happiest Celebration!’” in the special events for Easter, Halloween and Christmas, as well as in other exciting programs. In addition, not only will Guests discover special merchandise and special menu items just for the 35th anniversary, but also a special shop opening at Tokyo Disneyland for a limited period only. The Disney hotels and the Disney Resort Line will also celebrate the event, adding to the excitement around Tokyo Disney Resort.