Tokyo Disney Resort announced that a major celebration will be held to mark the 35th anniversary of its Grand Opening. The “Tokyo Disney Resort 35th Anniversary ‘Happiest Celebration!’” will be held from April 15, 2018, through March 25, 2019. During the anniversary period, both Parks will be decked out with colorful ribbons for a festive feel and there will be a variety of events to create happy experiences for the Guests. 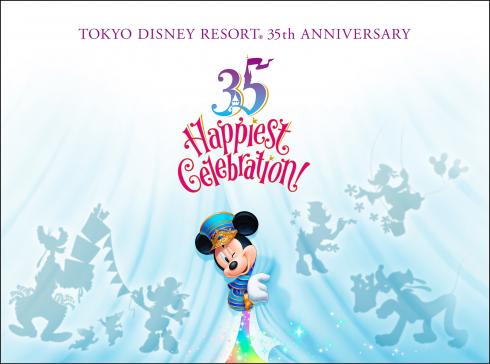 On April 15, 1983, the Kingdom of Dreams and Magic, Tokyo Disneyland Park, opened its gates to the public and grew from a single theme park into a resort that includes Tokyo DisneySea Park, four Disney Hotels and more. Tokyo Disney Resort has continued to be a place filled with happy moments where people of all ages can have wonderful experiences, a place “where dreams come true.” In 2018, Tokyo Disney Resort will create even more happiness and even brighter dreams as it celebrates 35 years of fun and joy with the “Happiest Celebration!” Following the anniversary event, the new Tokyo DisneySea attraction Soarin’ (tentative name) will open in 2019, and in 2020 Guests can look forward to the completion of the large-scale development at Tokyo Disneyland.

At Tokyo Disneyland, a new daytime parade will kick off the celebration when it premieres on April 15. The first new parade in five years will feature Mickey Mouse and the Disney Friends on colorful floats as they take Guests to a magical world of dreams born from Disney imagination.

The iconic Disney attraction “it’s a small world” reopens at Tokyo Disneyland in spring after undergoing extensive renovations. The revamped attraction will feature around 40 new figures representing characters from classic Disney films, ensuring that Guests continue to enjoy more than ever before “the happiest cruise that ever sailed!”

In summer, new nighttime entertainment at Cinderella Castle will feature new effects and Guests can look forward to a performance on a grander scale than ever before. In this new show, Cinderella Castle is magically transformed as the music conductor, Mickey Mouse, creates a fantastic spectacle of music and visuals for an unforgettable end to a day at the Park.

At both Parks there will also be other new entertainment programs, special merchandise and special menu items to celebrate the event, and Guests can expect to see elements of “Tokyo Disney Resort 35th Anniversary ‘Happiest Celebration!’” in special events for summer, Halloween and Christmas. Whatever the season or event, the “Happiest Celebration!” is sure to put a happy smile on every face.