Season of the Force Disneyland Paris 2017

In February we drove down to Disneyland Paris to experience Season of the Force. After all the anticipation this new event/season was finally there. During this trip we took the opportunity to stay at the B&B Hotel [Read our review of B&B Hotel] and Disney’s Santa Fe. Both hotels were new to us, but after having spent time at a lot of other hotels near Disneyland Paris, we want to spend a night at those hotels.

In the weeks leading up to Season of the Force, the marketing team had been putting out loads of video clips, behind the scenes, and more. So we were excited to go to Walt Disney Studios Park. As many know, this park is not a full-day park, and since Mickey and the Magician weren’t on stage (it just returned) there was something new needed.

I will group my trip report with all the things you can experience during the Season of the Force at Disneyland Paris.

Taking a page from the Playbook at Walt Disney World, Storm Troopers are now on patrol at the Studios. Several times a day, a duo of Storm Troopers will walk in between guests and interact with them. The sentences the Storm Troopers can utter are in French and English. Making an interaction seamless. While we were expecting that the Storm Troopers would actually patrol the area, the three times we saw them, they just walked from Back Stage to a location at the production lot and posed there for photos. While this makes it easier for people to line up and take photos, it does take away the patrol element in my opinion. As the Storm Troopers were taking photos, there was no Cast Member to assist with that, which meant that it was a lot of pushing to get a photo.

Patrolling Stormtroopers is an amazing experience, especially when they single you out as you look too much like a Rebel. But the overall execution could have been a bit better. Especially a Cast Member helping out guests with taking photos, or even better; a Photopass Photographer!

March of the First Order

Also here, taking a page from the Walt Disney World playbook, Captain Phasma leads her stormtroopers in front of the stage. While the stage is available, and minor things happen on it, the overall show takes place on the ground. Making it really hard for people to see what is happening. It took a while when the music started for the entire group to reach the Production Yard. As we weren’t sure where to expect Captain Phasma and the Stormtroopers to be, we ended up with a few people in front of us. This along with parents taking small kids on their shoulders made us not see that much of the show. After a few minutes, we moved to the back and were able to see a bit more. The March with the music and Captain Phasma calling out her commands is great. It really feels like the First Order just walked into the park. Just make sure you are on time and preferably have a spot at the front.

We already saw the stage being used during the March of the First Order, but with A Galaxy Far, Far Away, the stage is the focal point of the entire performance. The show starts immediately after the march, so don’t move (unless you want a better spot). During the stage show, all the different Star Wars characters you would expect were present. The use of music and video makes this an extremely entertaining show. We watched it twice to make sure we were able to fully grasp what was happening on the stage. The amount of actors that get out on stage is amazing and really makes you feel like you are watching a Star Wars movie.

As the show takes place on the stage, you can easily view it from several spots at the production backlot. (unlike the First Order March) 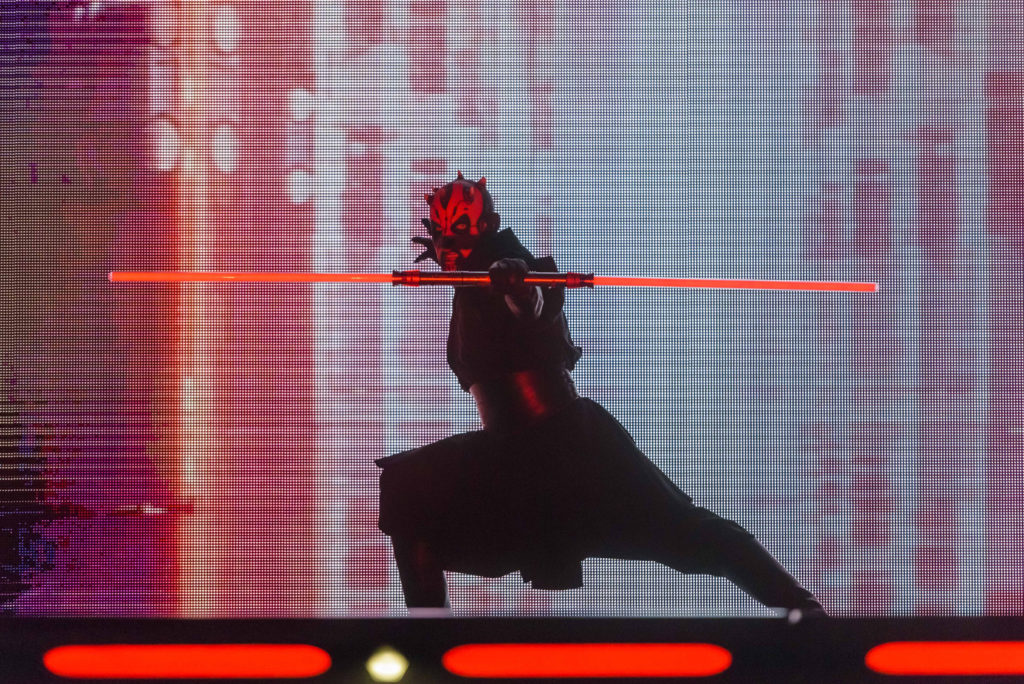 Something that Walt Disney Studios Park has been lacking for far too long was a nighttime show. With Season of the Force, we Disney fans and especially Star Wars fans, finally got what they always wanted. Using the Tower of Terror as a backdrop, the stage with the video screen, the amazing sound, and the fireworks truly make this one of the best nighttime shows we have seen. Star Wars: A Galactic Celebration is better than its cousin at the Hollywood Studios at Walt Disney World.

The work the team has put into the projection mapping, along with the improved sound at the Product Courtyard, can be seen, heard, and also felt. The use of video clips from the different movies, combined with fireworks and projections on the Tower Hotel makes this show feel like it is not from this galaxy. As we were able to plan it right, we were able to watch this show twice. For improved viewing, Cast Members might recommend you to go stand near the Stitch Live Show sign and we can attest that this is certainly a great spot to watch the show. There might be parents putting their kids on their shoulders, but we didn’t really find this annoying as the viewing angle with the stage and the backdrop is just perfect.

While the show starts, you might notice that some elements from the daytime show are seen during the nighttime show. We didn’t really find this annoying and it was great to see the same elements when the sun already had set. As the show also uses the stage, you might want to keep an eye on that one as well.

We were quite excited to attend Season of the Force. After having seen the show that is put on stage in the US and after having seen all the preparations at Walt Disney Studios Park, we were eager to get into the park and experience it all. We often don’t visit the Studios at all, but now with everything that was happening at the park, we even had lunch and dinner there. The addition of all things Star Wars is great and will make sure that the park will see an uptick in its visitor numbers. Behind the scenes at Season of the Force