For the first time, Halloween Time at the Disneyland Resort is also taking over Disney California Adventure Park, with areas such as Buena Vista Street and Cars Land getting all dressed up for holiday fun. The recently-opened Guardians of the Galaxy – Mission: BREAKOUT! attraction gets some additional thrills as it transforms into Guardians of the Galaxy – Monsters After Dark each night. Additional attractions will receive spooky fun updates, and there will be plenty of Halloween decorations, themed food and beverage, eerie merchandise and more. 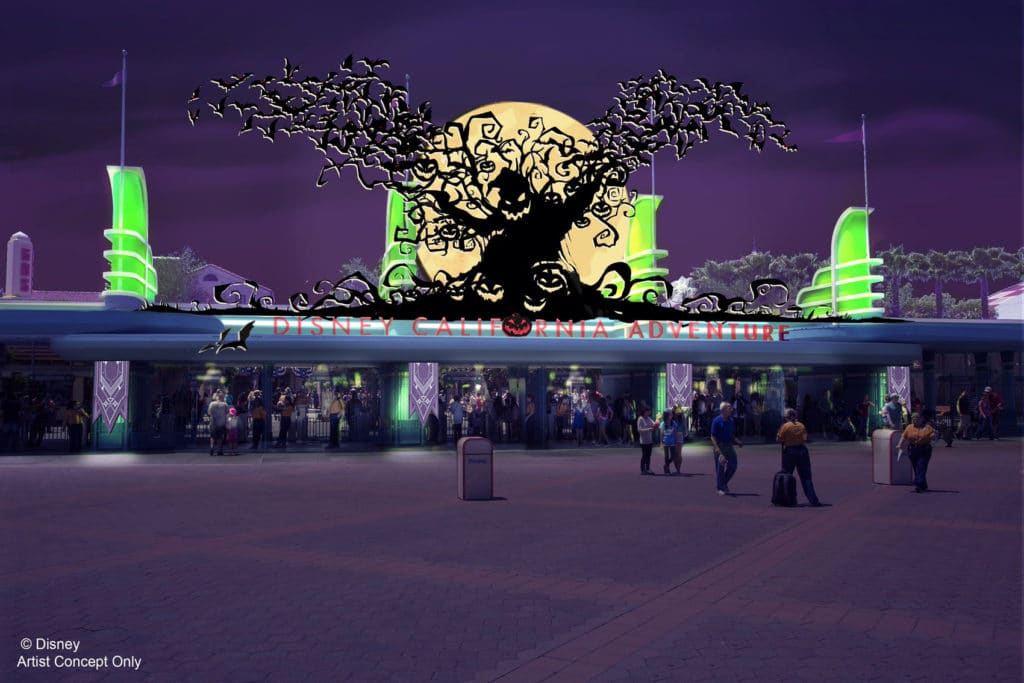 Halloween excitement begins as guests first enter Disney California Adventure. An oversized, shadowy silhouette of Oogie Boogie, the villainous boogeyman from “Tim Burton’s The Nightmare Before Christmas” ominously leers over guests passing through the main entrance. In a spooky but fun moment, Oogie appears to unleash a swarm of bats which sound as if they fly down Buena Vista Street towards Hollywood Land, Cars Land and beyond. Guests will even see the bats circling the tower of the Carthay Circle Theatre.

Everyone’s favorite Cars characters have transformed Radiator Springs into their own Haul-O-Ween celebration. Scary the “Scare-car” greets guests at the entrance of Route 66 for a special photo opportunity. Each of the Cars has decorated its establishment for the season. With Fillmore showing off his Jack-Oil-Lanterns and ghostly folk art, Sarge displaying his “pump-kins,” and a Spider-Car spinning webs all over the outside of Flo’s V8 Café, the town of Radiator Springs will indeed be transformed into Radiator Screams! 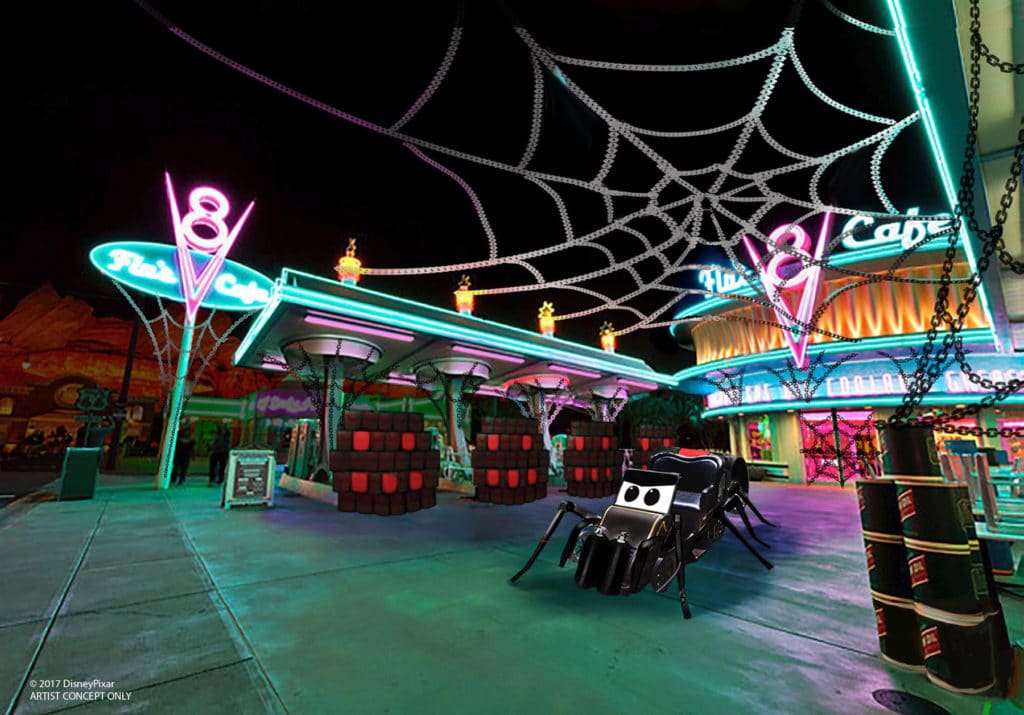 Two of the attractions also have been transformed for Halloween for the first time. Mater’s Junkyard Jamboree becomes Mater’s Graveyard JamBOOree. Expect to hear some creepy, new songs and fun haunted twists on other hits, including “Monster Truck Smash” and “Welcome to Radiator Screams” as guests whirl around the graveyard. Additionally, Luigi’s Rollickin’ Roadsters becomes Luigi’s Honkin’ Haul-O-Ween, an all-new spooktacular dance celebration where Luigi and Guido entertain the cugini (cousins) with Halloween twists to traditional Italian festival songs like the “Terror-antella,” “The Chop Top of Carsoli” and more. It’s hair-raising fun … for a limited time! 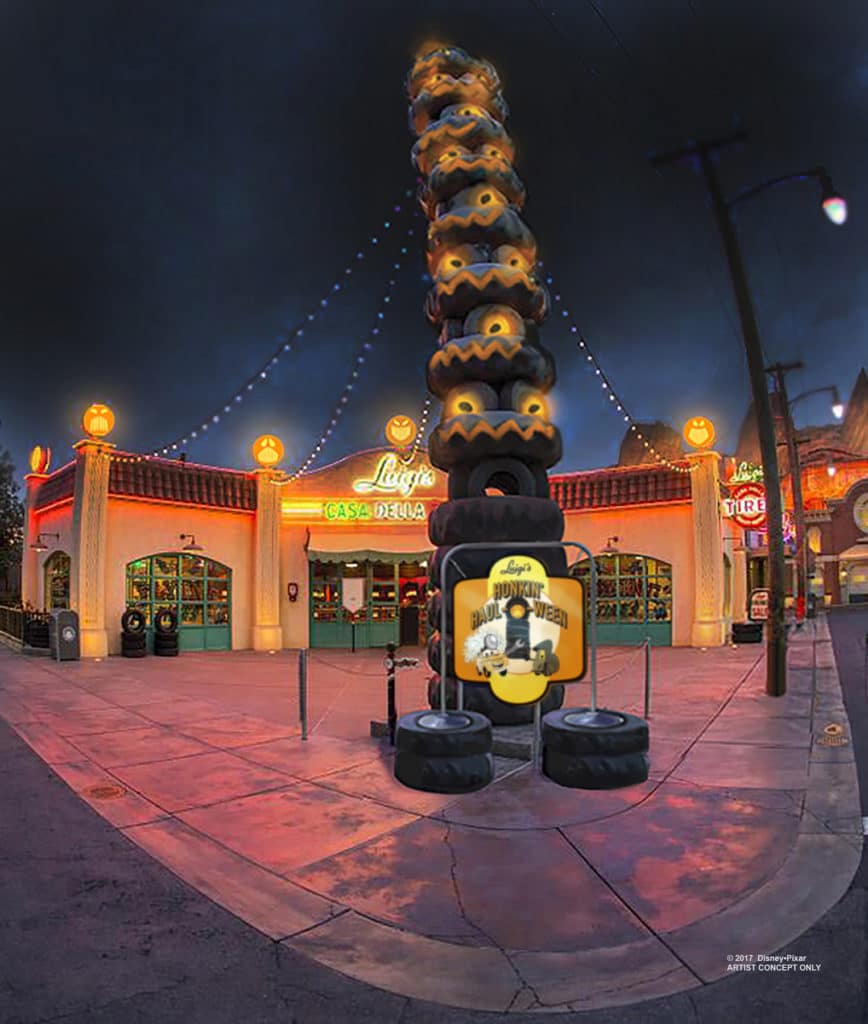 Also, for the first time, the Cars characters will be donning their Halloween “car-stumes” as they greet guests and prepare to go “trunk-or-treating.” Mater will be wearing his vampire or “van-pire” outfit, while Lightning McQueen is dressed as a super hero. Cruz Ramirez, Red the Fire Truck and DJ get dressed up as a pirate, a clown and a punk rocker, respectively.

Guardians of the Galaxy – Monsters After Dark

As guests enter the Lobby of the Fortress, they will be startled by flashing alarms and creepy sounds – warning signs that creatures have escaped their vitrines (glass cages) and all kinds of chaos is erupting. The Collector’s ever-resourceful assistant, Apheta, tries to keep calm by reassuring guests that all is in order, and this is just a momentary setback.

In keeping with the dark humor of the experience, an all-new 1970s-style punk rock song, “Monsters After Dark,” enhances the thrill of the experience. The song was written especially for this attraction by Tyler Bates, composer for the “Guardians of the Galaxy” films.

Along Buena Vista Street, guests will enjoy Halloween decorations in store windows and in Carthay Circle, they’ll see a new 10-foot-tall statue of the Headless Horseman himself, holding up his jack-o’-lantern head to the sky. New, themed background music further creates the appropriately eerie, but still fun, mood. 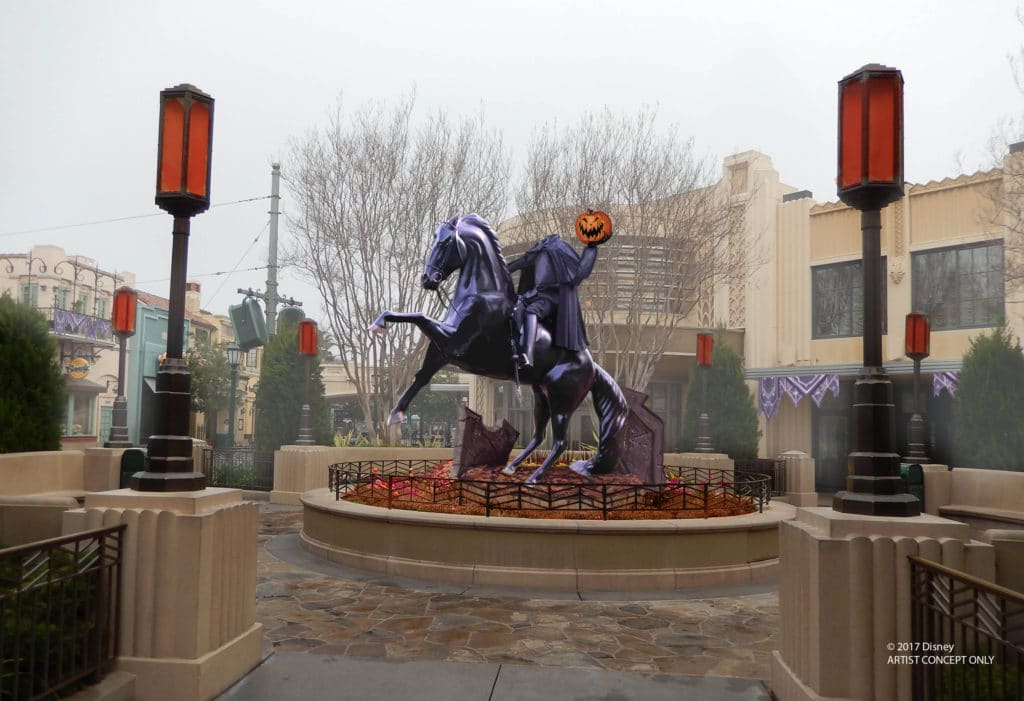 Mickey and his friends also will be in the area, donning their period-appropriate Halloween costumes, such as a bat for Mickey Mouse, a ghost for Goofy and a witch for Daisy Duck – all in playful fun, of course.

Throughout the park, Halloween-themed food and beverage offerings will include:

Disney California Adventure also will be featured for the first time as part of the pre-party mix-in for Mickey’s Halloween Party, a separate-ticket event that features special entertainment, Disney characters in their Halloween attire, and trick or treating at locations throughout Disneyland. This year, a ticket to Mickey’s Halloween Party has even greater value as guests will be able to visit Disney California Adventure as well as Disneyland during the three hours prior to the beginning of the party in Disneyland Park.