One snack you shouldn’t miss while visiting Shanghai Disneyland is the Donald Duck Waffle at il Paperino. This street cafe just off of Mickey Avenue brings you to Venice, Italy. Il Paperino (Italian for The Donald) is a cute little food shop where you will find tasty treats and funny (and amazing) artworks depicting Donald in Venice. 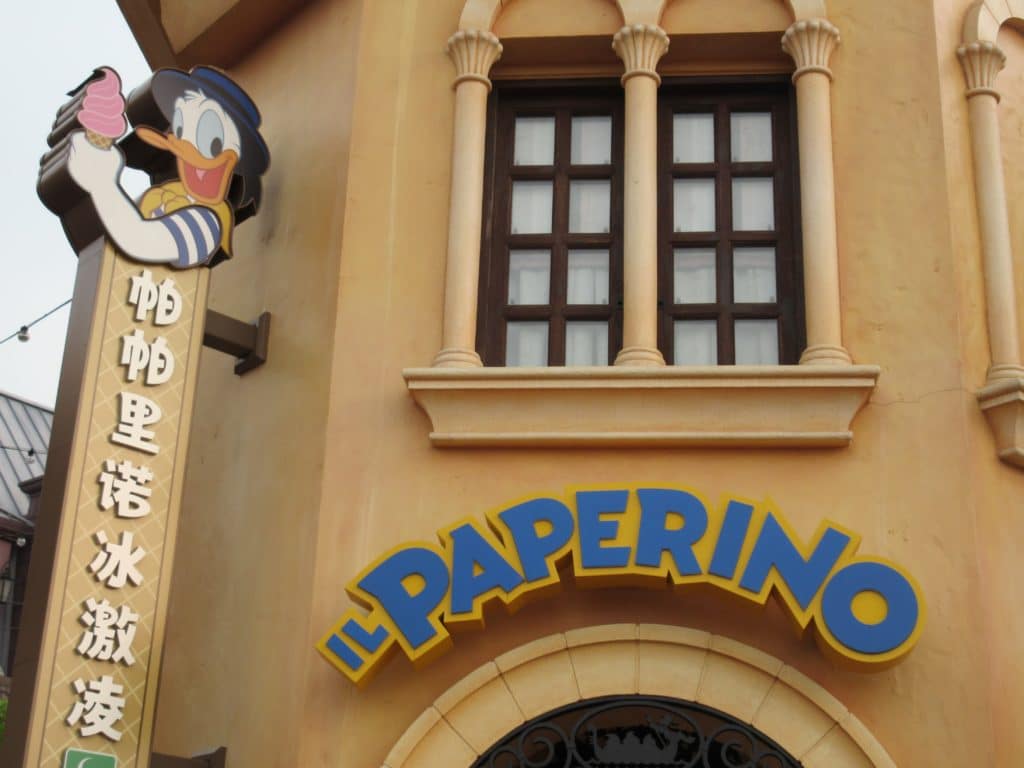 Outside of il Paperino

On the outside of the building a mural can found showing a scene of Donald with friends (and enemy) somewhere in Venice. This could likely as well be the Rialto Bridge in the center of Venice, showing the nephews playing around, Scrooge in a gondola which is steered by Pete, and Donald hauling around Daisy’s luggage. 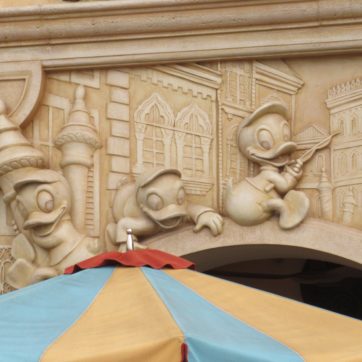 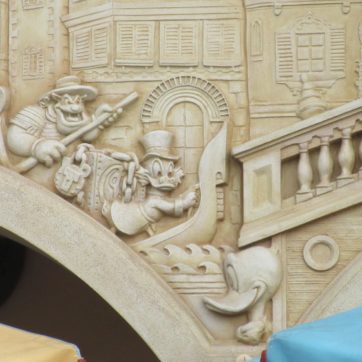 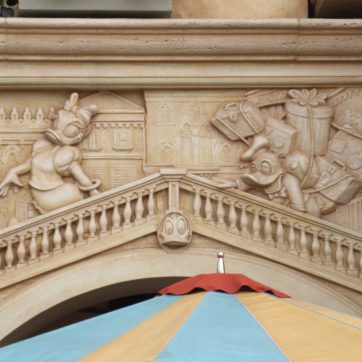 Inside of il Paperino

When inside you will see a lot of other references to Venice. While you wait to place your order, you will walk through a queue area with mooring poles just like you would see them in Venice. And the fact that they are not straight, well that is part of the ‘joke’. The counter itself is a huge gondola with on the left side a portrait of Donald. 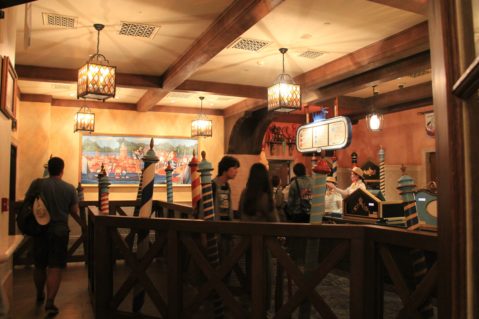 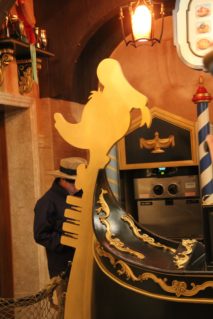 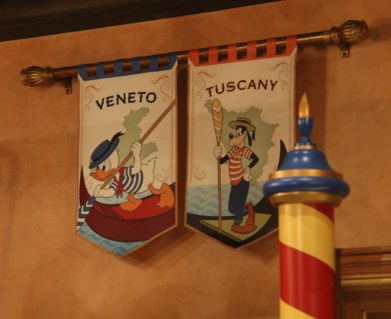 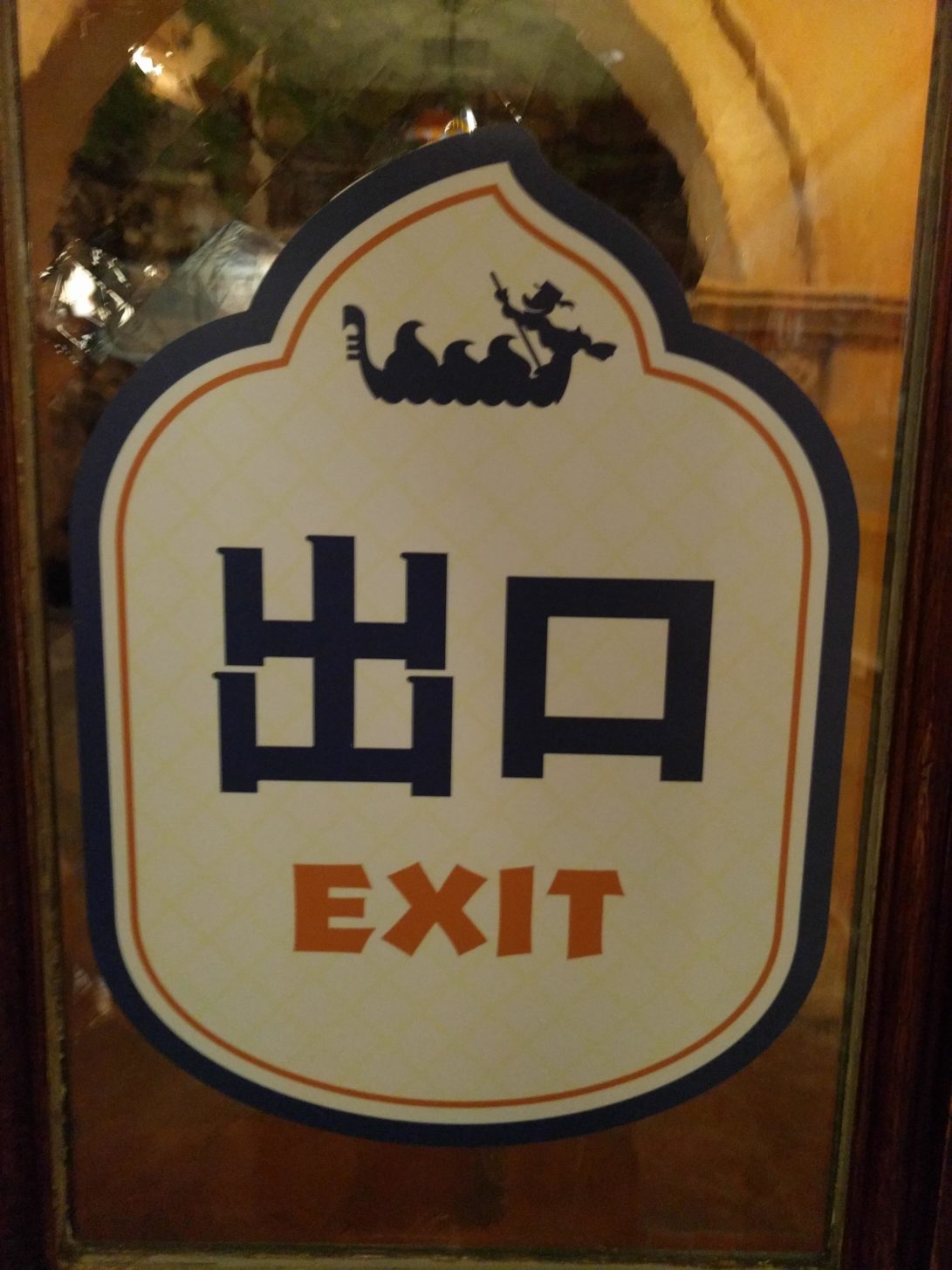 On the right you will find a few banners with Donald in Veneto (which is the region Venice is part of) and Goofy in Tuscany (which is the region where you can find Florence). Even when you exit there is a little reference to Paperino and Venice. The eye for detail in this place is amazing.

When you look around a bit more, you will also see some other artwork. On the left you will find a large painting of Donald and Goofy as gondoliers, Daisy looking a bit annoyed as Donald is singing. On the other side you will find the Duck family tree, the Fore-Feathers. Many of you might already have seen this before, but it was great actually see it being used at a Disney Park. 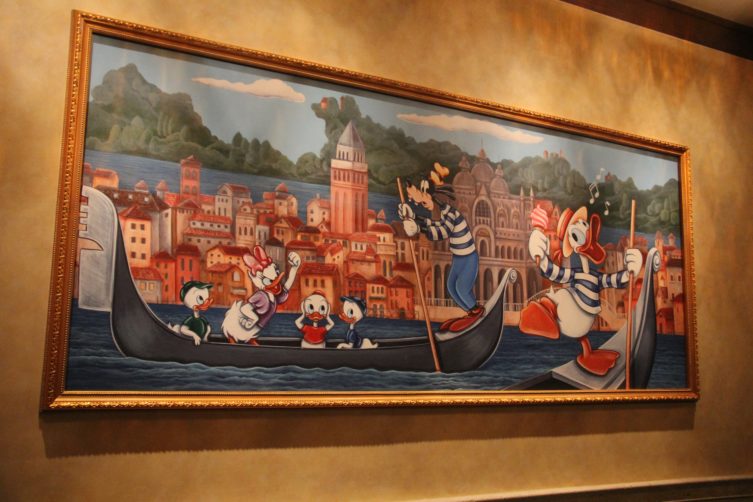 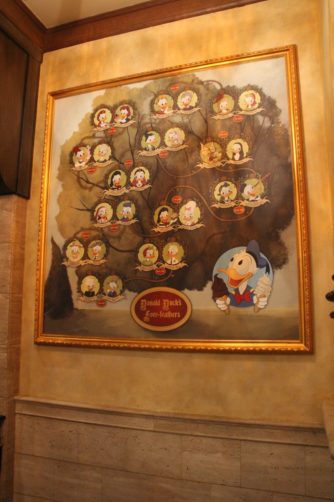 Il Paperino offers 6 different Donald’s Waffles to choose from. Everybody will be able to find their favorite here:

For guests who’d rather not have a waffle, you can also choose from various soft serve waffle cones and an éclair.

On our last night at Shanghai Disneyland, we finally found the time to grab a waffle at il Paperino. And when I finally overcome my excitement of all the Donald imagery through the shop, I ordered a Plain Donald Waffle with maple syrup. We just had dinner and I didn’t want to waste too much food so I settled for the plain one. 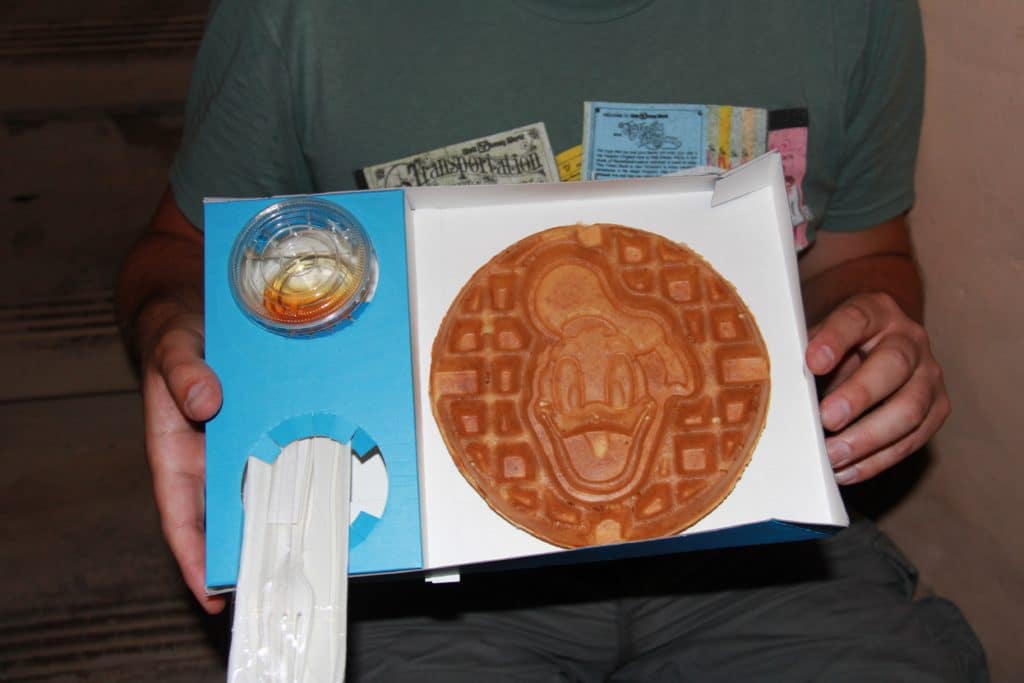 The ordering went easy, and the Cast Members were really nice. They even noticed that I was really into Donald so I think they had a bit of a laugh about that. There was no real line but that was also because we went in for a waffle just after the fireworks. Most people were already leaving the park. They had a few waffles ready to order and we got box with the Donald waffle even before I was done taking photos of the inside of il Paperino.

We stepped outside and sat down at one of the steps near Club 33. As you might expect, this is just a plain waffle like you can find them at many other spots. But that fact that it has Donald’s head on there, makes it a fun waffle to eat. The temperature was fine (even though it was already waiting for me), the consistency was good, and the maple syrup was warm and running (you can even see that on the photo). I enjoyed the waffle but didn’t eat it completely as I was still full from dinner.

When we go back to Shanghai Disneyland, I will for sure try one of the other waffles. But for now I leave you with the comment that even if you don’t crave waffles, go have a look as the details at this place are amazing.