Long considered a beacon of happiness around the world, Walt’s Disney’s original Disneyland Park reopened to the public, along with Disney California Adventure Park, on Friday, April 30, 2021. Guests entered the theme parks filled with joy and excitement as they discovered the magic is here once again, as enchanting and timeless as ever. On this historic day, cast members welcomed guests back to the parks to explore favorite attractions, wave hello to beloved Disney characters, don a pair of Mickey Mouse ears and savor iconic Disney treats.

Just prior to the gates of Disneyland opening for the first time in more than a year, Chief Executive Officer of The Walt Disney Company Bob Chapek participated in the daily ceremony to raise the American flag and shared brief remarks of inspiration for the cast members who were preparing for the momentous day.

Guests returned Friday for the magic of Disney storytelling and the immersive theme park experiences only Disney can deliver. Once again, guests are stepping back into the realm of Star Wars: Galaxy’s Edge, embarking on a swashbuckling voyage on Pirates of the Caribbean and launching into an “Incredible” adventure on the Incredicoaster. They’re setting sail with children from around the globe on “it’s a small world,” taking photos alongside Lightning McQueen and Tow Mater, and zipping along Route 66 on Radiator Springs Racers.

Guests will experience new magic on some classic attractions, as well. The newly reimagined Snow White’s Enchanted Wish opens to guests for the very first time; the Haunted Mansion has been enhanced with some eerie surprises, and King Arthur’s Carrousel has been fancifully refurbished.

The Hotels of the Disneyland Resort are welcoming guests back to the magic with a phased reopening. Disney’s Grand Californian Hotel & Spa reopened on April 29, 2021, with limited capacity. Disney Vacation Club Villas at Disney’s Grand Californian Hotel & Spa plan to reopen May 2. Disney’s Paradise Pier Hotel and the Disneyland Hotel will reopen at a later date.

The health and well-being of guests and cast members is a top priority. With enhanced health and safety measures, operational changes are in place at the theme parks and hotel based on guidance from health authorities and learnings from Disney parks around the world to promote physical distancing, enhanced cleanliness and reduced contact. These measures include appropriate face coverings required for all guests ages 2 and older, temperature screenings prior to park entry, capacity measures and cashless transactions. Cast members throughout the Resort are dedicated to assist with questions, and guests may check Disneyland.com/update for the current health and safety measures.

Classic and favorite attractions will begin to open at both parks – from epic experiences like the new Star Wars: Rise of the Resistance to family-friendly experiences like Peter Pan’s Flight and Inside Out Emotional Whirlwind.

At Disneyland, the fun awaits on colorful, spinning cups at Mad Tea Party and on thrilling escapades at Indiana Jones Adventure, Space Mountain and Big Thunder Mountain Railroad. At Disney California Adventure, guests will be immersed in the stories and adventures of Guardians of the Galaxy: Mission BREAKOUT!, Toy Story Midway Mania!, The Little Mermaid ~ Ariel’s Undersea Adventure, and more.

In Fantasyland, a timeless tale comes alive in news ways on Snow White’s Enchanted Wish. Dazzling new scenes include a dancing figure of Snow White joining the dwarfs in their cottage as the scent of a baking pie wafts through the air. Vibrant new shadow projections show the dwarfs as they march off to the mine happily singing “Heigh Ho,” and the new lighting, glittering jewels and shimmering effects make the mine sparkle. Guests then travel through the Queen’s den to see a new library of spell books, glowing potions and bubbling flasks, toward the famous magic mirror. In the end, Snow White and her Prince ride joyfully into a golden sunset to live happily ever after.

On the “must-do” list for many guests will be a journey to Star Wars: Galaxy’s Edge, the largest and most technologically advanced single-themed land expansion ever in a Disney park. Guests are transported to a galaxy far, far away at the Black Spire Outpost on the planet Batuu, where they can take the controls of the most famous ship in the galaxy on Millennium Falcon: Smugglers Run. The newest attraction in the land, Star Wars: Rise of the Resistance, opened in January 2020. It takes guests aboard a full-size transport shuttle before they are captured by a Star Destroyer, finding themselves in the middle of a climactic battle between the dark side of the First Order and the light side of the Resistance.

Characters are part of the magic

From surprise appearances along Main Street, U.S.A., and Pixar Pier to playful interactions, characters from dozens of favorite Disney stories entertain and delight guests across both parks. Beloved characters will pop up in new ways and sometimes in unexpected places as they remain mindful of physical distancing.

At Disneyland, guests may see Mickey Mouse and Minnie Mouse waving from the train station, or Disney Princesses such as Mulan appear at the Royal Theatre to wave and pose at a distance for guests taking selfies. At Disney California Adventure, Pixar pals may wave from the bandshell at Pixar Pier, and guests can share a laugh while taking photos with Mater and Lightning McQueen along Route 66 in Cars Land.

Certain experiences that draw large group gatherings – such as parades and nighttime spectaculars – will return at a later date.

At several locations around the resort, mobile ordering* on the official Disneyland app now is the primary way to order food and drinks. Dining reservations are recommended for table-service restaurants. Other convenient features also include the ability to view menus with QR codes, join a mobile check-in walk up list for dining or mobile check-in for dining reservations, all through the Disneyland app.

After playing in the theme parks, guests may relax with an overnight stay at Disney’s Grand Californian Hotel & Spa, where they are surrounded by stunning Craftsman-style architecture reminiscent of the turn of the 20th century. Guests are treated to genuine hospitality and quality service, just steps from the Downtown Disney District and Disneyland Resort theme parks. The enchanting Disney magic includes well-appointed accommodations, sparkling pools and a chance to request a wake-up call with greetings from some favorite Disney characters. 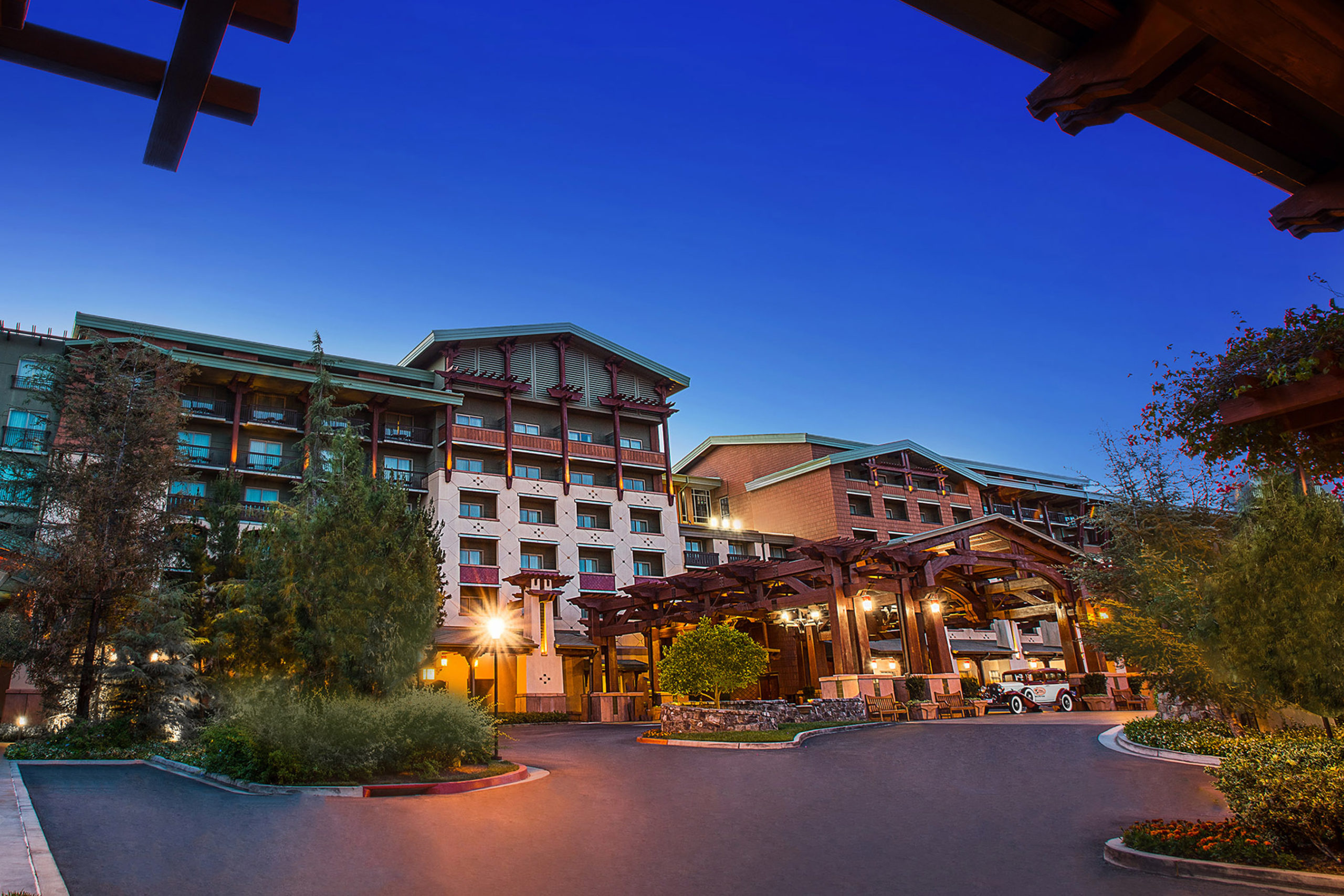 Guests with valid theme park admission who are planning a stay at a Disneyland Resort hotel will need to also book theme park reservations in advance, as a hotel stay does not guarantee a park reservation. Hotel capacity will be limited. Guests may book hotel stays for Disney’s Grand Californian Hotel & Spa, or a nearby Disneyland Resort Good Neighbor Hotel, by visiting Disneyland.com or contacting a travel professional.

Digital technology helps guests make the most of their visits 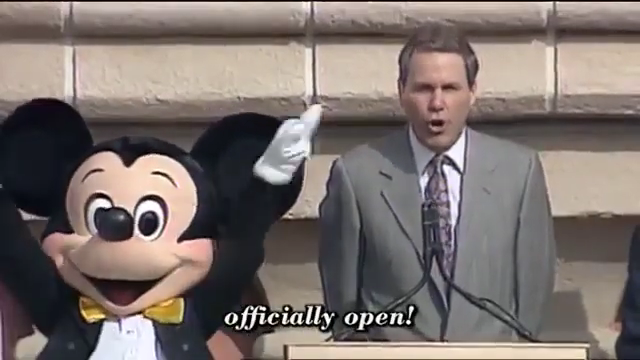 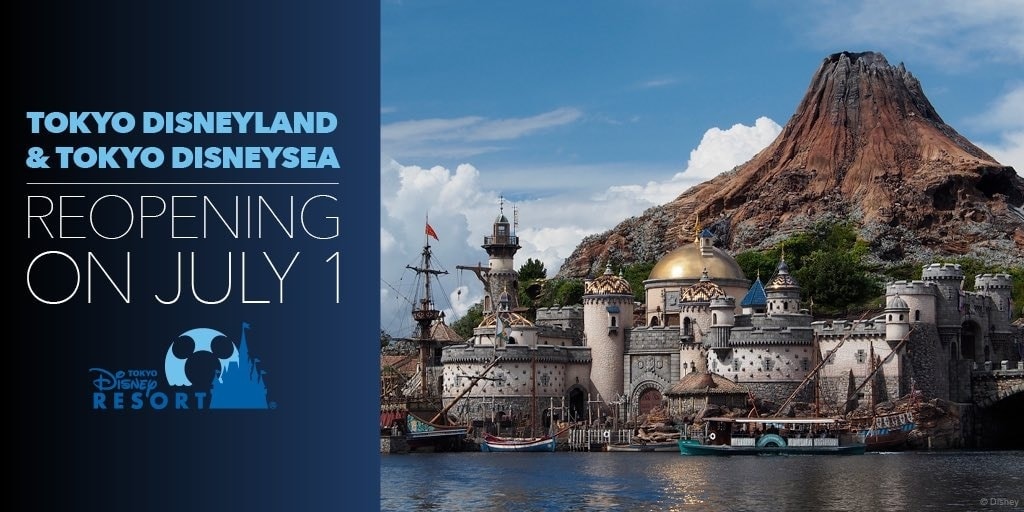 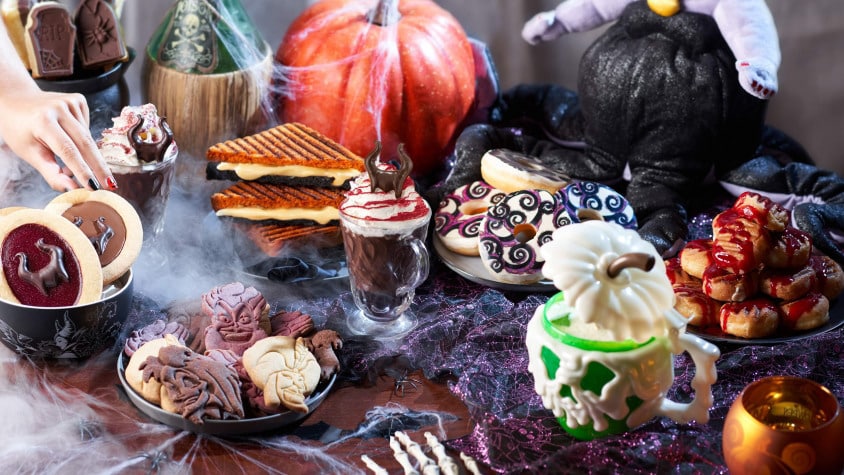 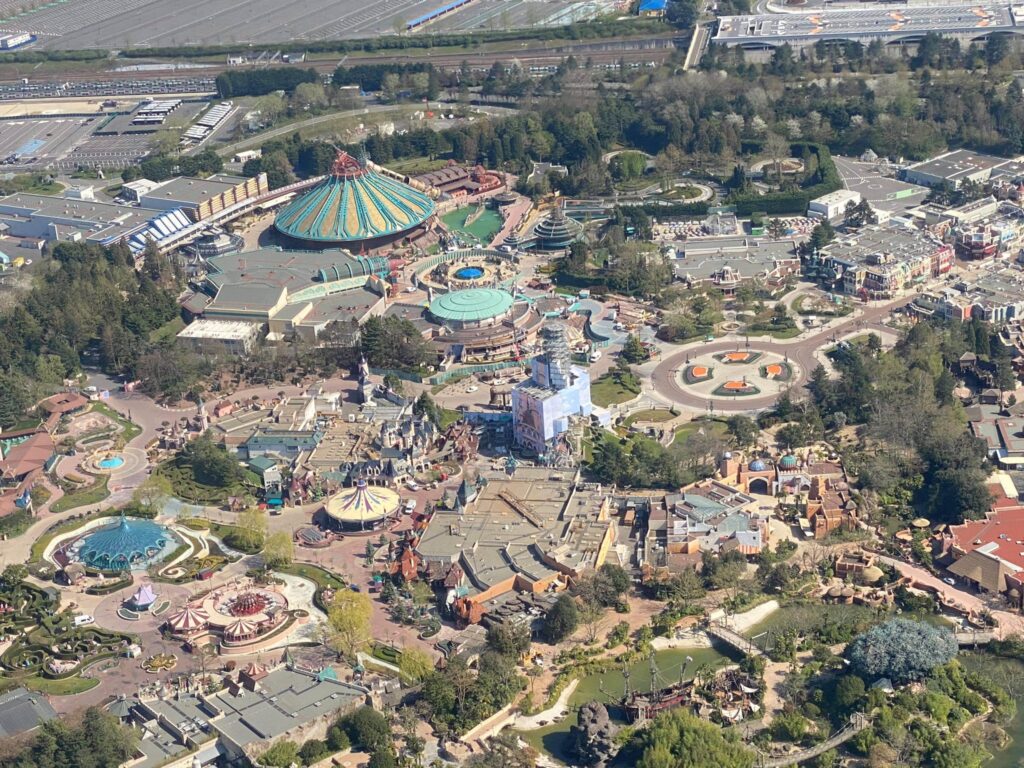 Aerial photos of Disneyland Paris show a boxed in castle 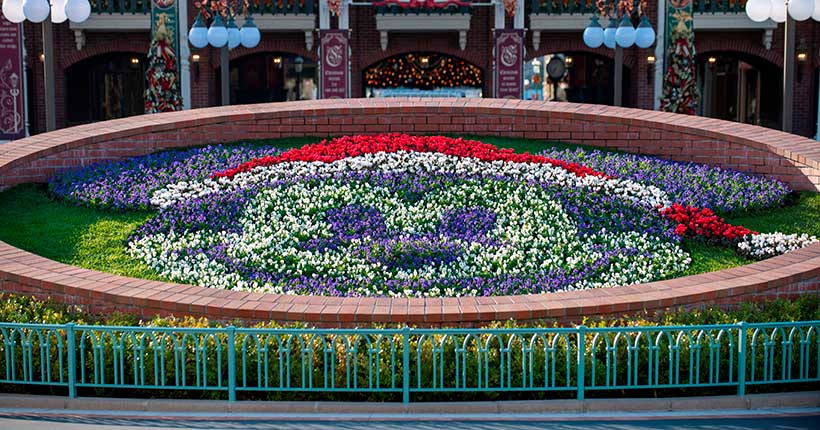