Last month a new exhibit on 70 years of Donald Duck Comics in The Netherlands opened at the Museum of Comic Art in Noordwijk. And as I am a huge fan of the weekly comics that have been published since 1952, I just had to go there for a visit. 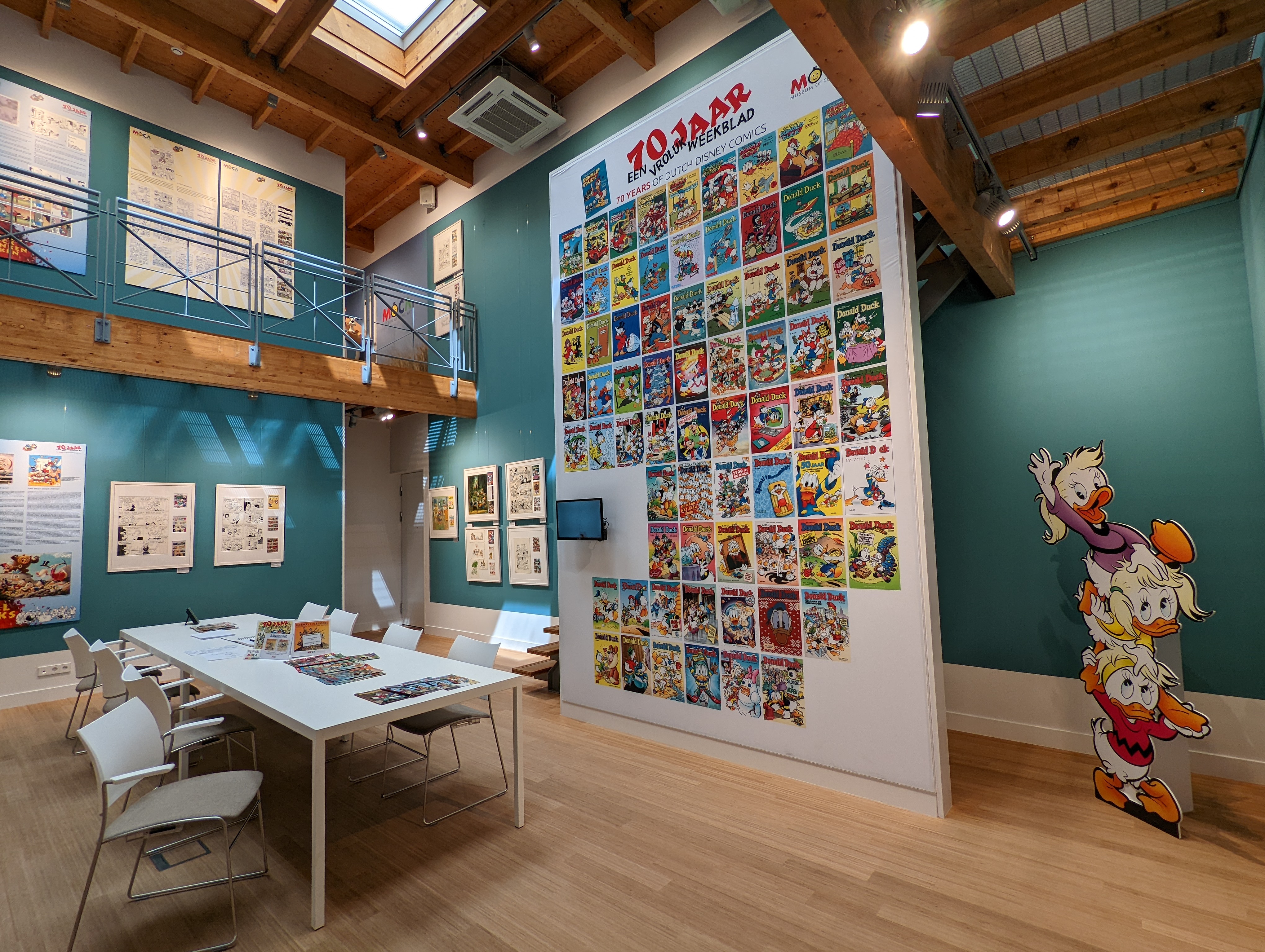 The Museum of Comic Art (or MoCA for short) is a fairly new museum but it has had the opportunity to host some great exhibits. And from June 4 until October 31, 2022, it is Donald’s turn.

Donald Duck comics have been published in The Netherlands since 1952. At first, it was a free addition that could be found in The Margriet, the Dutch weekly magazine for women of all ages. After that ten weekly editions for that year were published, and since 1953 readers could subscribe to the weekly comic. The first few editions were partially in color and in black-and-white. Since the 10 edition of 1954, the entire comic was published in color. 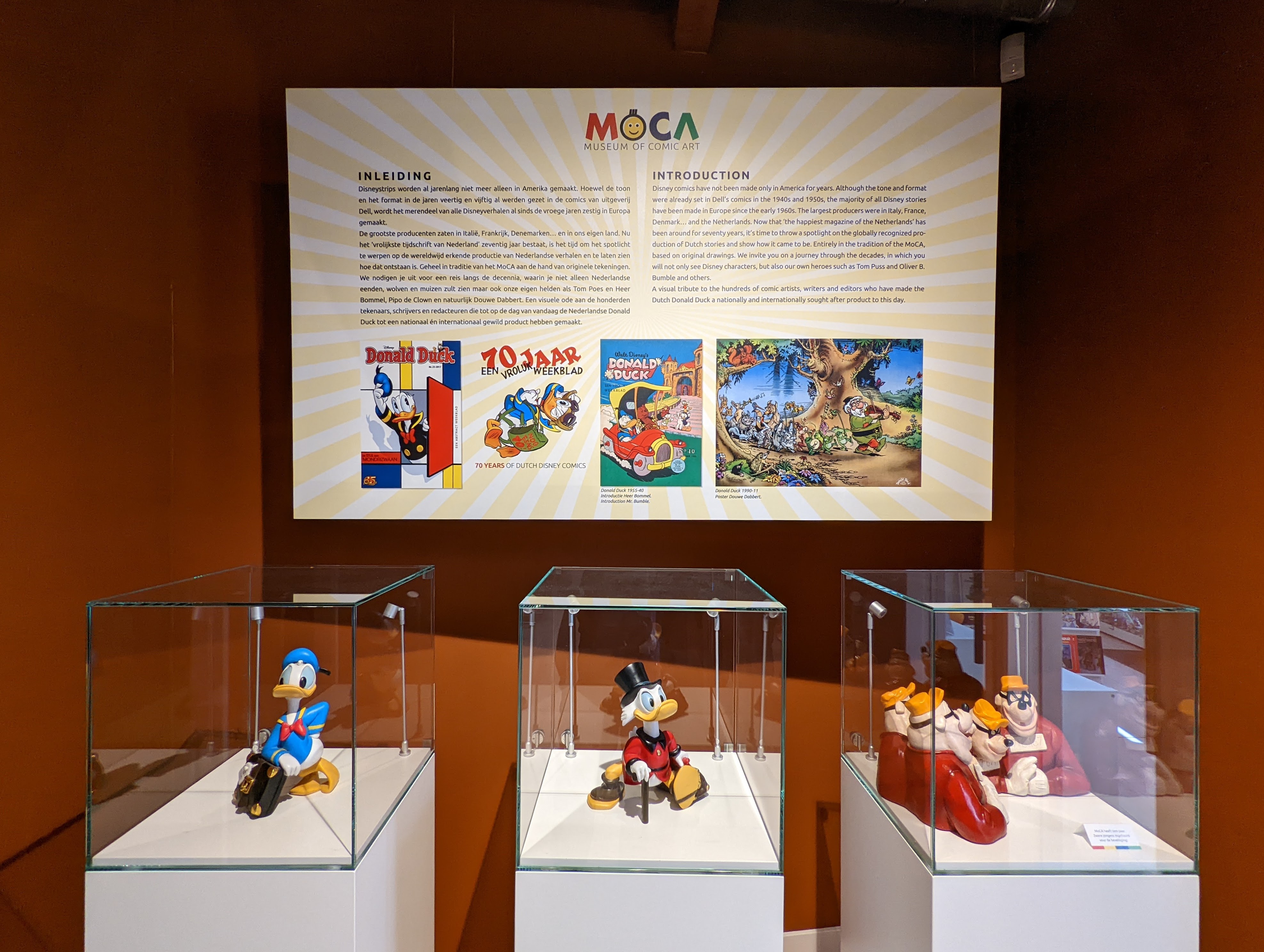 In the beginning, a lot of stories from the US were republished (being of course translated into Dutch). In the ’60s the original US stories were in decline, and publishers in Italy, Germany, Denmark, and the Netherlands started to create their own original stories. As of today, the Weekly Comic in the Netherlands has more than 200.000 subscribers and is the Dutch editorial staff one of the largest publishers of Donald Duck stories.

Donald Duck at the MoCA

You enter the museum through the museum shop. Here you can find tons of older issues of your favorite comics (more than just Donald Duck) but also tons of artwork that is for sale. When you walk into the exhibit, on the right you will find an introduction to the exhibit. Here you will quickly notice that this exhibit is multi-lingual: Dutch and English. This is especially handy for fans from abroad.

You start the exhibit tour along the outer walls where you will find original drawings of the comics and covers that have been used for the Weekly Comic, but also for additional editions. Each board has tons of information on what you are seeing at that moment, but also additional information on what was happening in those years with the publication of the weekly comic. 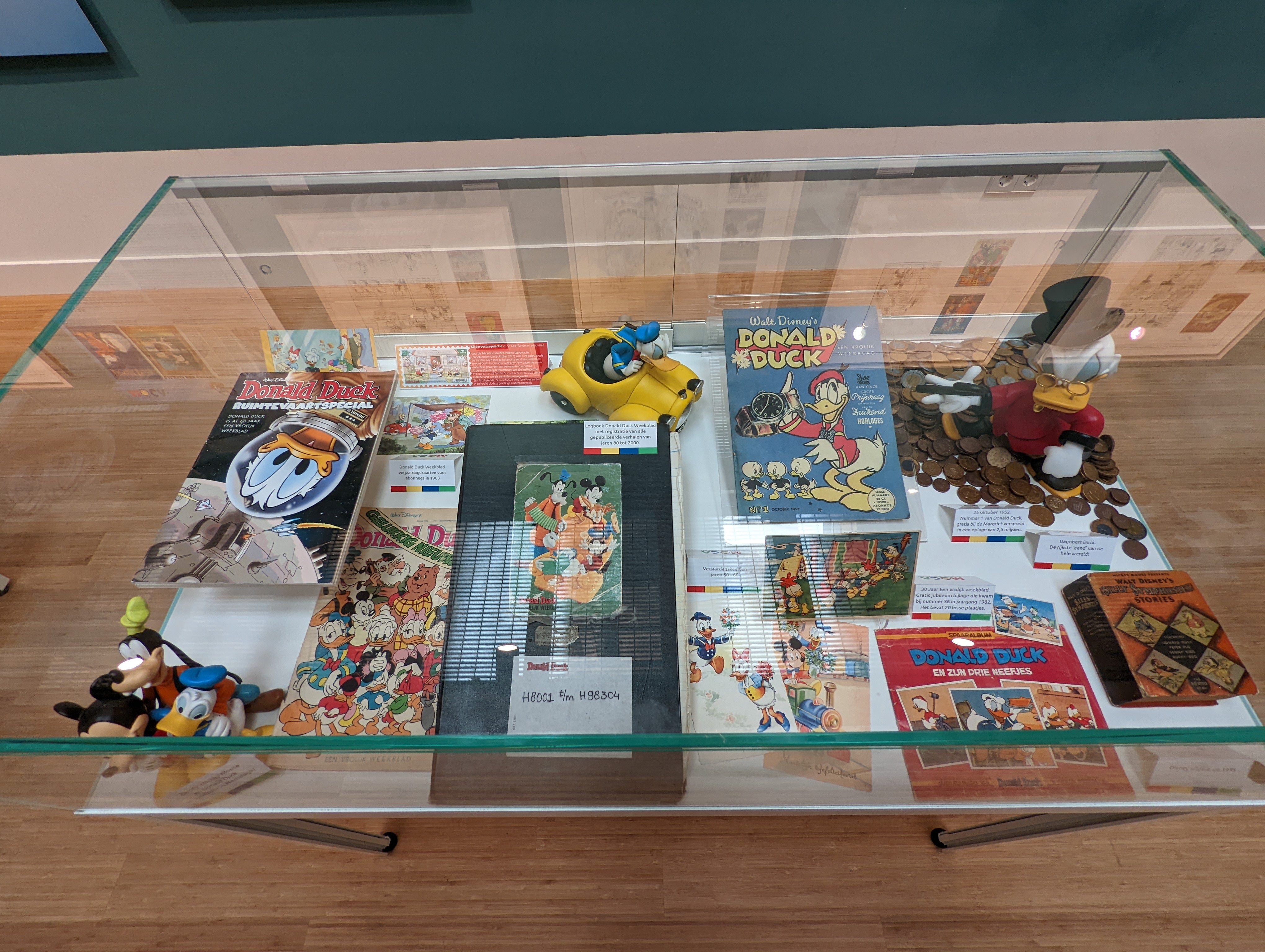 On the inside of the floor, you will find a few showcases, showing you tons of additional artifacts, including the original cover of the Museum guide drawn by Daan Jippes. In one of the other showcases, you can also see the log book that was used by the Dutch editorial staff to keep track of all the stories they published. The Dutch story codes always start with an H (for Holland) and you can see that the log book was used for H8001 to H98304. While this also includes short stories and covers, this is a whopping 90303 publications in about 20 years!

On the table, in the middle, you will find some issues of the most recent Donald Duck Weekly Comics. You can relax and have a read. Once you are done with that, there is a staircase that will take you to the second level. The staircase itself is covered with an enormous poster that shows some of the covers that were used for the weekly comics. Almost all my favorites were on that poster, unfortunately, one was missing, that was the one where readers could submit photos of them reading the Donald Duck. I even made it onto that cover! 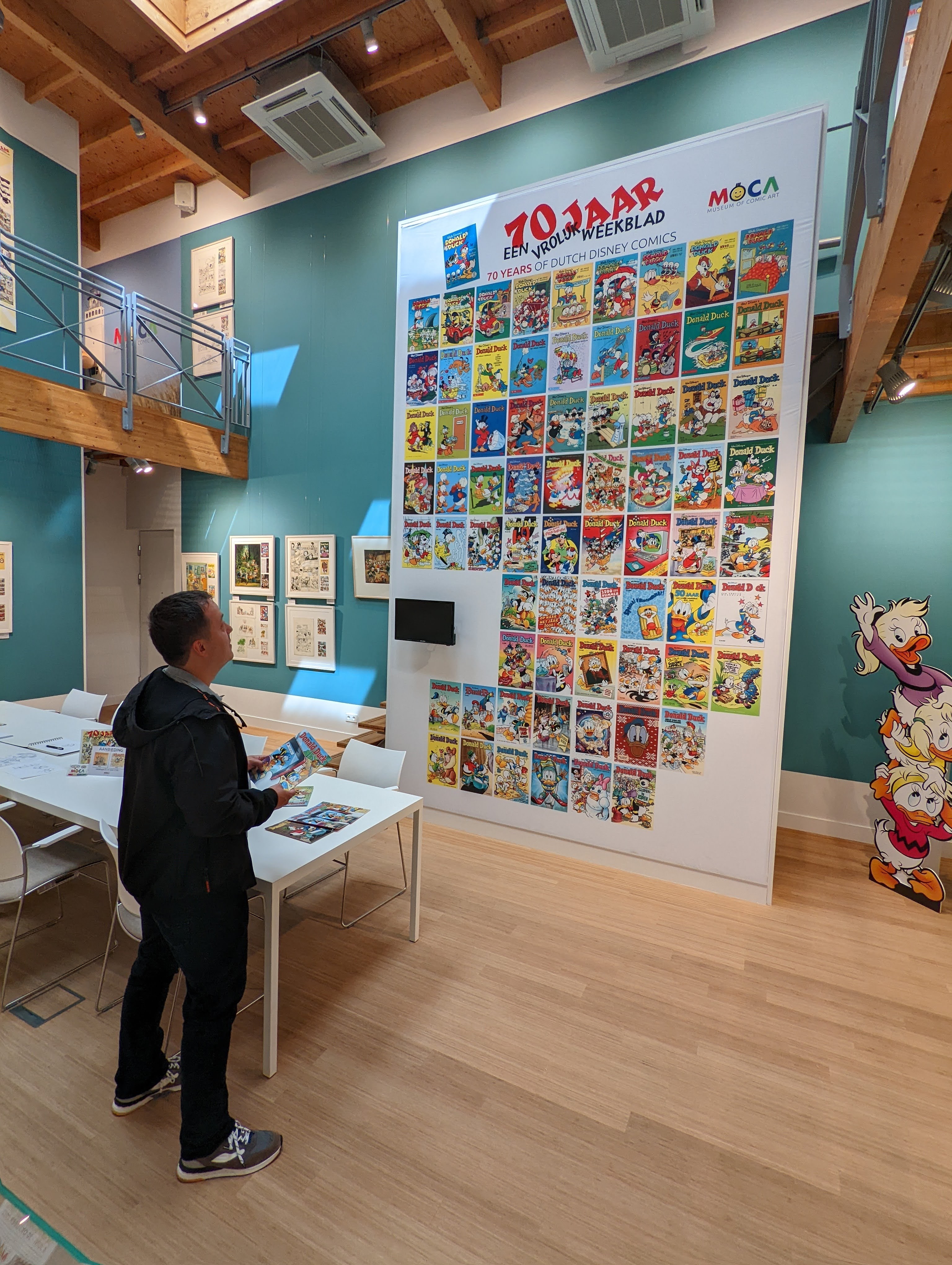 When you walk up the staircase, you will be treated to more information about all the different years of Donald Duck comics, including changes that happened in the editorial staff. There is a little nook where you can sit on a Donald Duck beanbag and read some comics. Behind the wall on the left, you will find some chairs in front of a TV where a few short documentaries are played. The most prominent one is of Carl Barks who visited The Netherlands back in 1994 (while he was 93 years of age!).

At the end of the gallery, you will find the door back to the museum shop. You start on the second floor and with a spiral staircase, you will make your way down from the art section to the comic book and other collectibles. 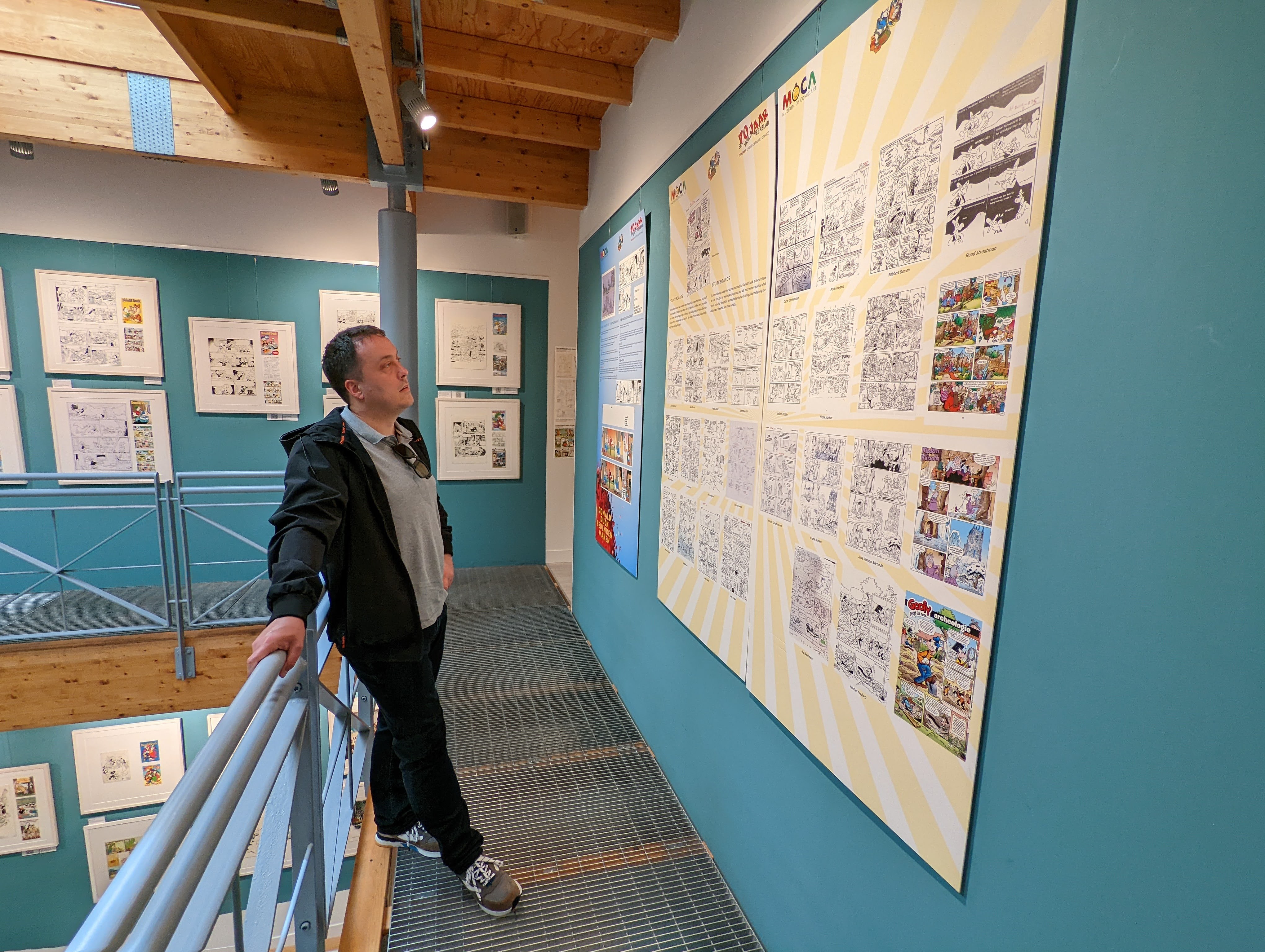 The museum is amazing. Everything and more that you ever wanted to learn about the Dutch Donald Duck Comic books can be found there. The exhibit has more than 50 originals drawn by more than 30 comic book artists. It even has two original Carl Barks drawings. While kids will enjoy the ability to read comics, adults will enjoy the history of this weekly comic as well. Some of the items are hung up quite high, so for really young kids, it will be harder to see it all.

Visiting the Museum of Comic Art

The Donald Duck, 70 years a Happy Weekly Comic, exhibit will be at the Museum of Comic Art (MoCA) from June 4 until October 30, 2022. We spent about 60 minutes walking around the exhibit, while we did take some time to look at the documentaries, we didn’t watch them all. I do think when you want to watch them all, and take some time to read comic books you would need about 90 minutes.

We spent about 45 minutes at the museum shop, but that was mostly because we started chatting with the proprietor of the museum who is super nice and knows a lot about comics.

The museum is open Wednesday to Sunday from 12 pm to 5 pm. Tickets cost 8 euros for adults, and 4 euros for ages 6 to 17, and 5 and younger can enter for free.

Parking is close by, and after the museum and shop visit, you can always wander out to the boulevard where you can find some great restaurants.

More information and how to buy tickets can be found on the official MoCA webpage. The museum shop is run by Fantasia Shop.