Walt Disney World Resort opened Oct. 1, 1971, to guests – and an entire world – eager to see how Walt Disney’s genius had pixie-dusted the trackless flatlands of Central Florida into a Magic Kingdom. Ten thousand guests, their smiles as wide as the October skies, streamed into Walt’s fairytale park on that historic day, ready to be transported to a world of fun and fantasy, where teacups spin, elephants fly and life’s cares melt away at the gates.

“May Walt Disney World bring joy and inspiration and new knowledge to all who come to this happy place … a Magic Kingdom where the young at heart of all ages can laugh and play and learn together.” – Official Dedication, Oct. 25, 1971

These words were spoken by Walt’s brother, Roy O. Disney, at the official grand opening of Walt Disney World. Mickey Mouse, sporting the world’s largest bass drum at the time, led 5,000 marchers in a festive parade through the five lands of Magic Kingdom Park. Guests were also treated to a high-stepping marching band 1,076 performers strong.

Walt did not live to see that day, but after years of planning and construction (and Roy postponing retirement to help see it through), his much-anticipated “Florida Project” was open and ready to welcome the world. From one theme park, two resort hotels and two golf courses, Walt’s dream today is a world unto itself including four theme parks, two water parks, more than two dozen resort hotels, Disney Vacation Club properties, Disney’s Fort Wilderness Resort & Campground, 63 holes of championship golf, ESPN Wide World of Sports Complex, Disney’s BoardWalk entertainment enclave and Disney Springs, a waterfront entertainment, dining and shopping district.

And now 50 years and millions of memories later, Walt Disney World Resort is on the brink of an exciting new era of family entertainment as it kicks off the next 50 years. All of it inspired by the ultimate dreamer, Walt Disney.

Here’s a look at some of the many milestones in the 50-year history of The Most Magical Place on Earth:

Oct. 27 – Walt Disney records a film outlining plans for the Florida Project – including details for Disney World and the Experimental Prototype Community of Tomorrow (EPCOT). 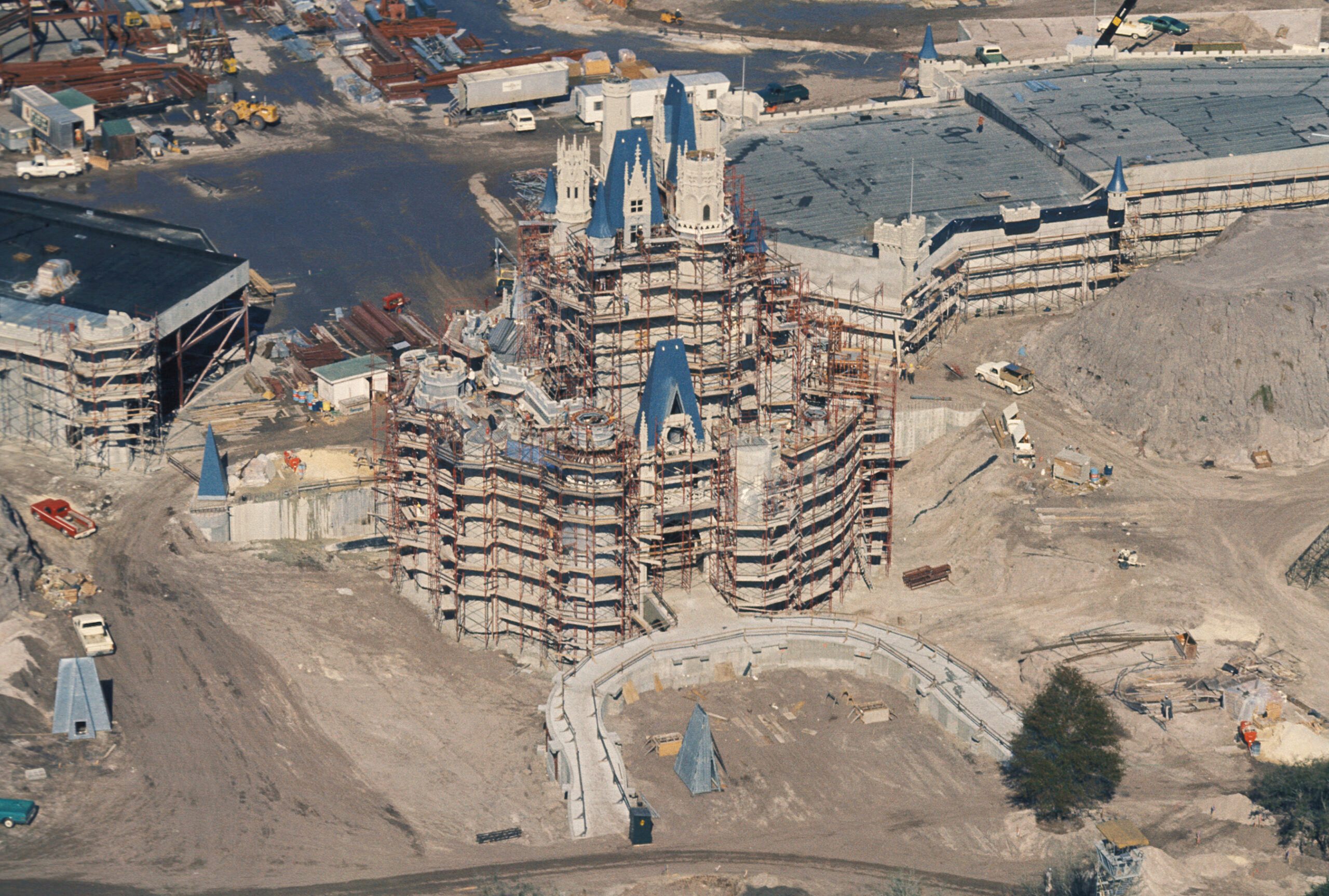 Jan. 16 – The Walt Disney World Preview Center opens in Lake Buena Vista, Fla., becoming the first location to welcome guests on Walt Disney World property. It features scale models and artist renderings for many of the diverse experiences being created for the “Vacation Kingdom of the World.” 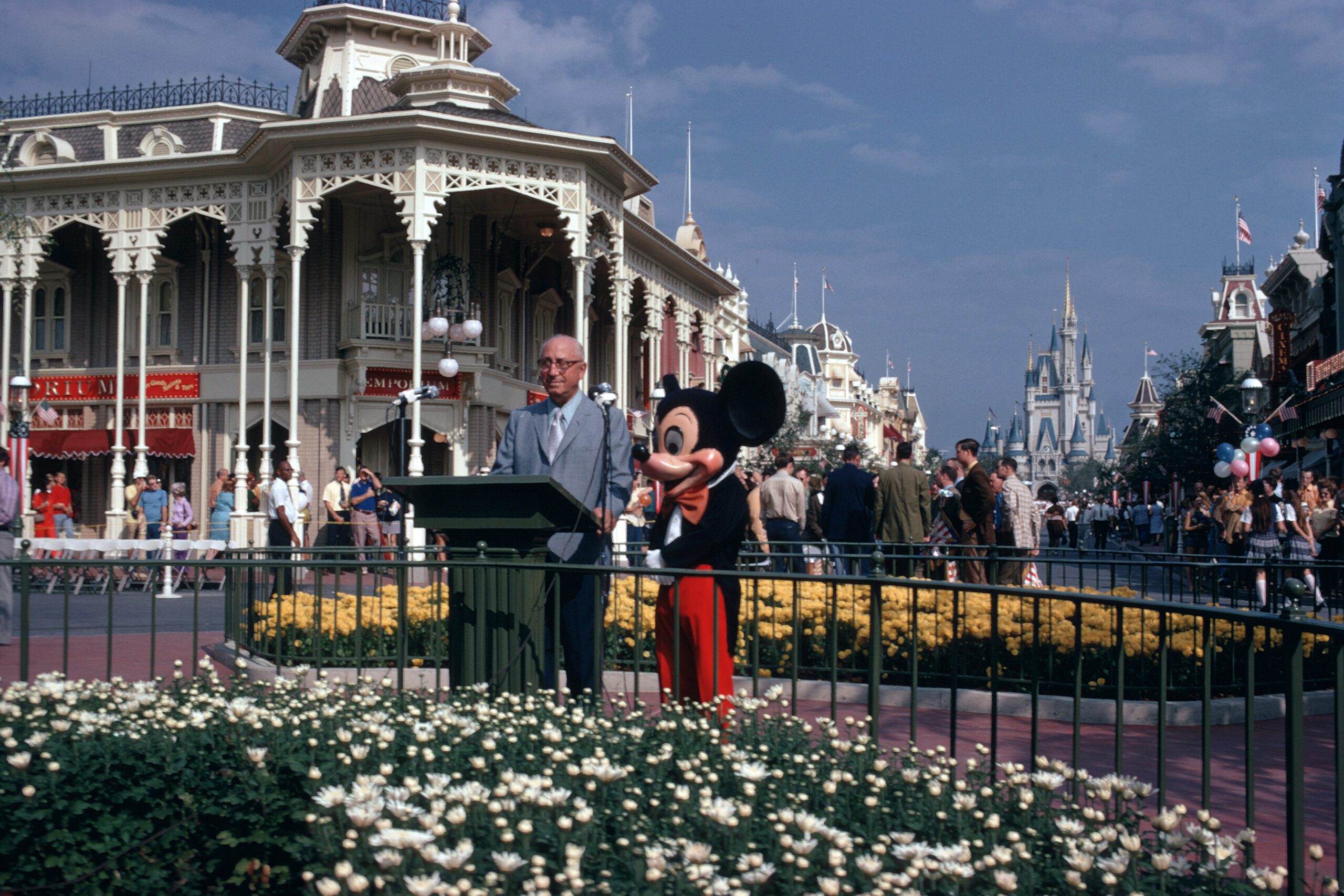 Oct. 1 – Walt Disney World officially opens to the public. Phase one includes Magic Kingdom Park, Disney’s Contemporary Resort and Disney’s Polynesian Village Resort. The resort is a showplace of innovation, featuring a transportation system of monorails, watercraft, trams and motor coaches, as well as a centralized computer network and other groundbreaking systems supporting the many guest offerings and attractions. 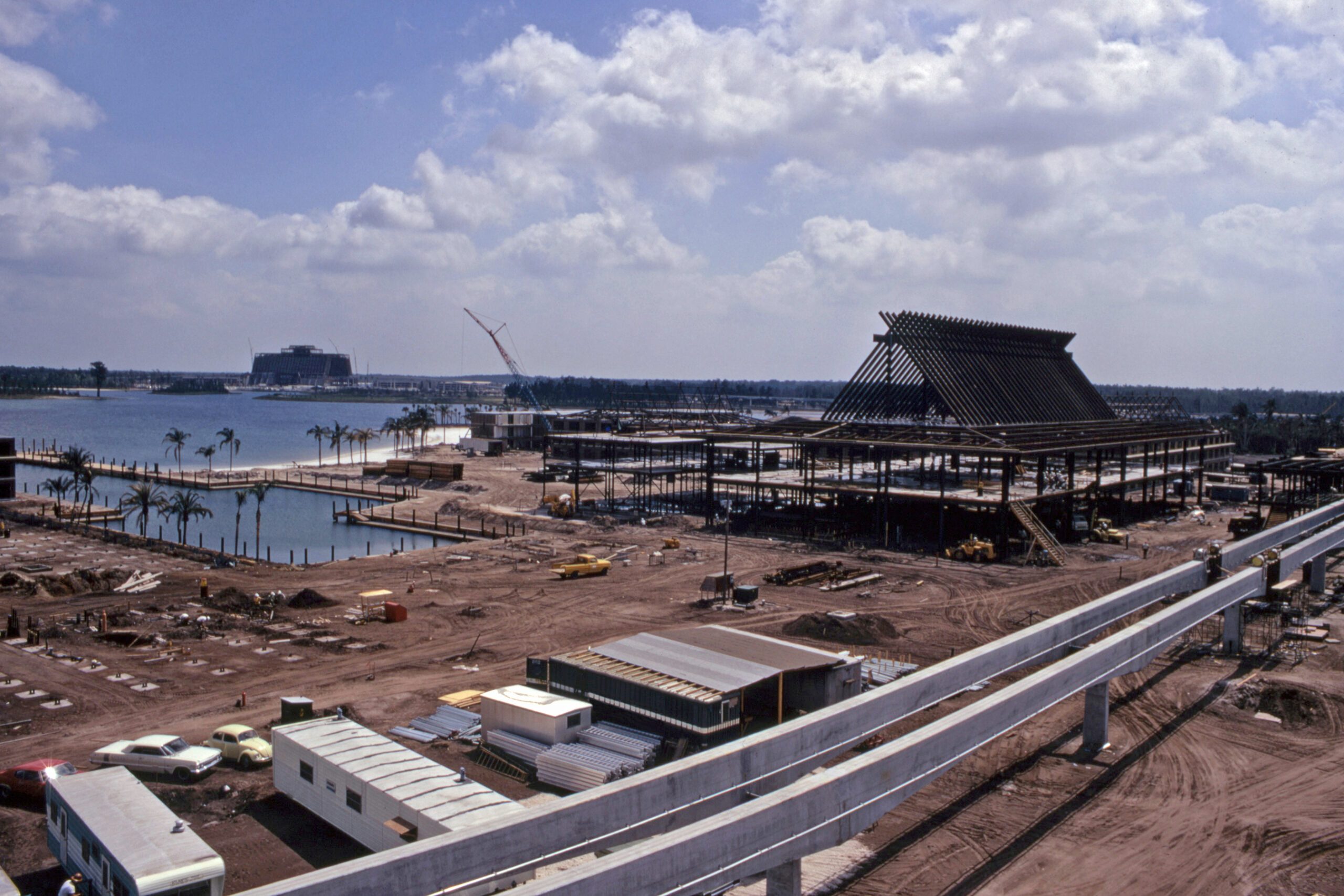 Oct. 25 – The Electrical Water Pageant debuts, bringing twinkling lights and a colorful synthesizer soundtrack to become a guest favorite along the waters of Seven Seas Lagoon and Bay Lake.

Dec. 15 – Walt Disney World Resort expands with a new hotel, now known as Shades of Green, and a new attraction, Pirates of the Caribbean, in Adventureland. 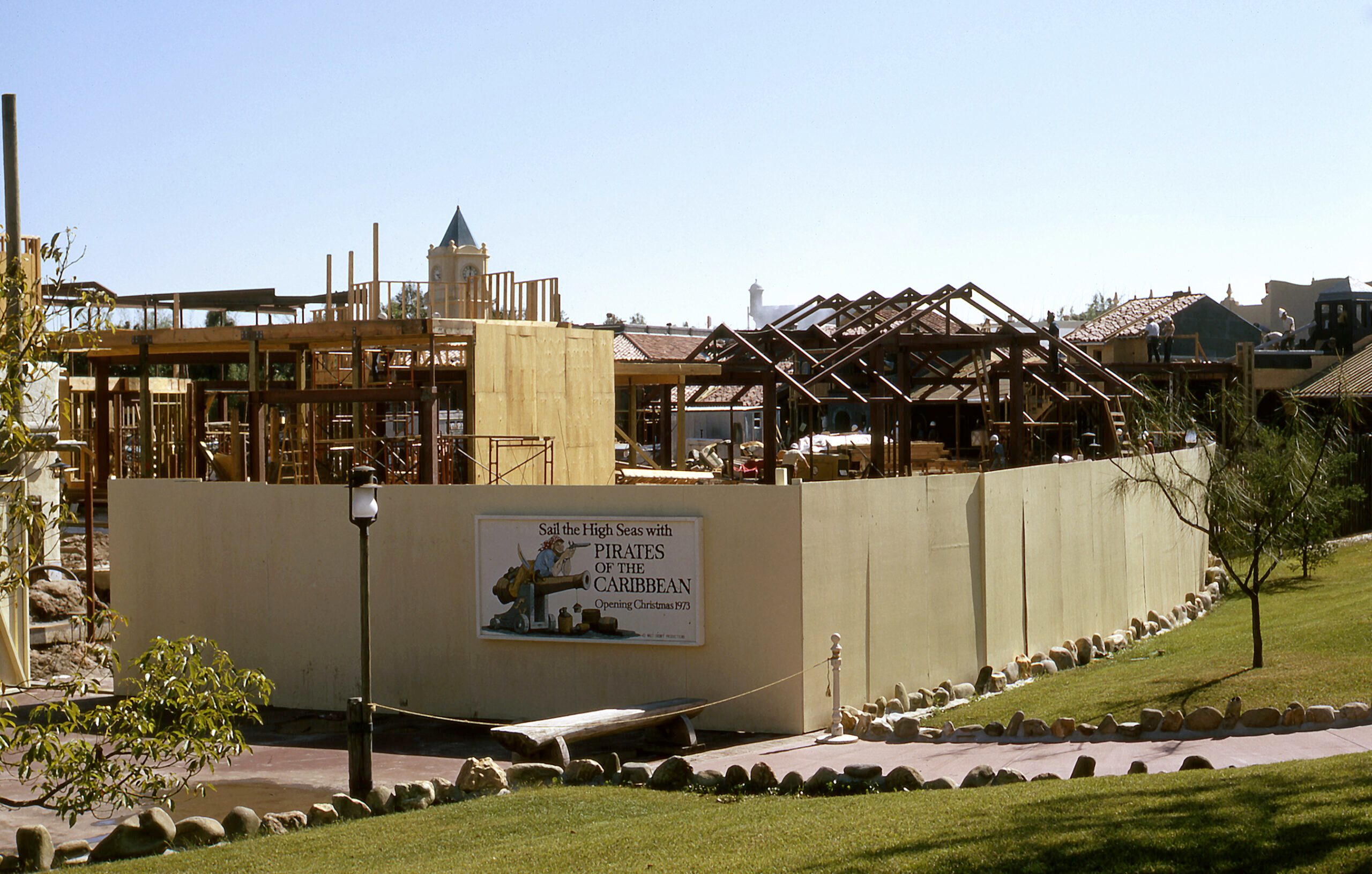 June 30 – The Hoop-Dee-Doo Musical Revue premieres at Disney’s Fort Wilderness Resort.  Today, it is one of the longest-running dinner shows in American history.

Jan. 15 – Tomorrowland expands with Space Mountain and GE Carousel of Progress opens, further enhancing Tomorrowland with the latter currently holding the record for longest-running stage show in the history of American theater. 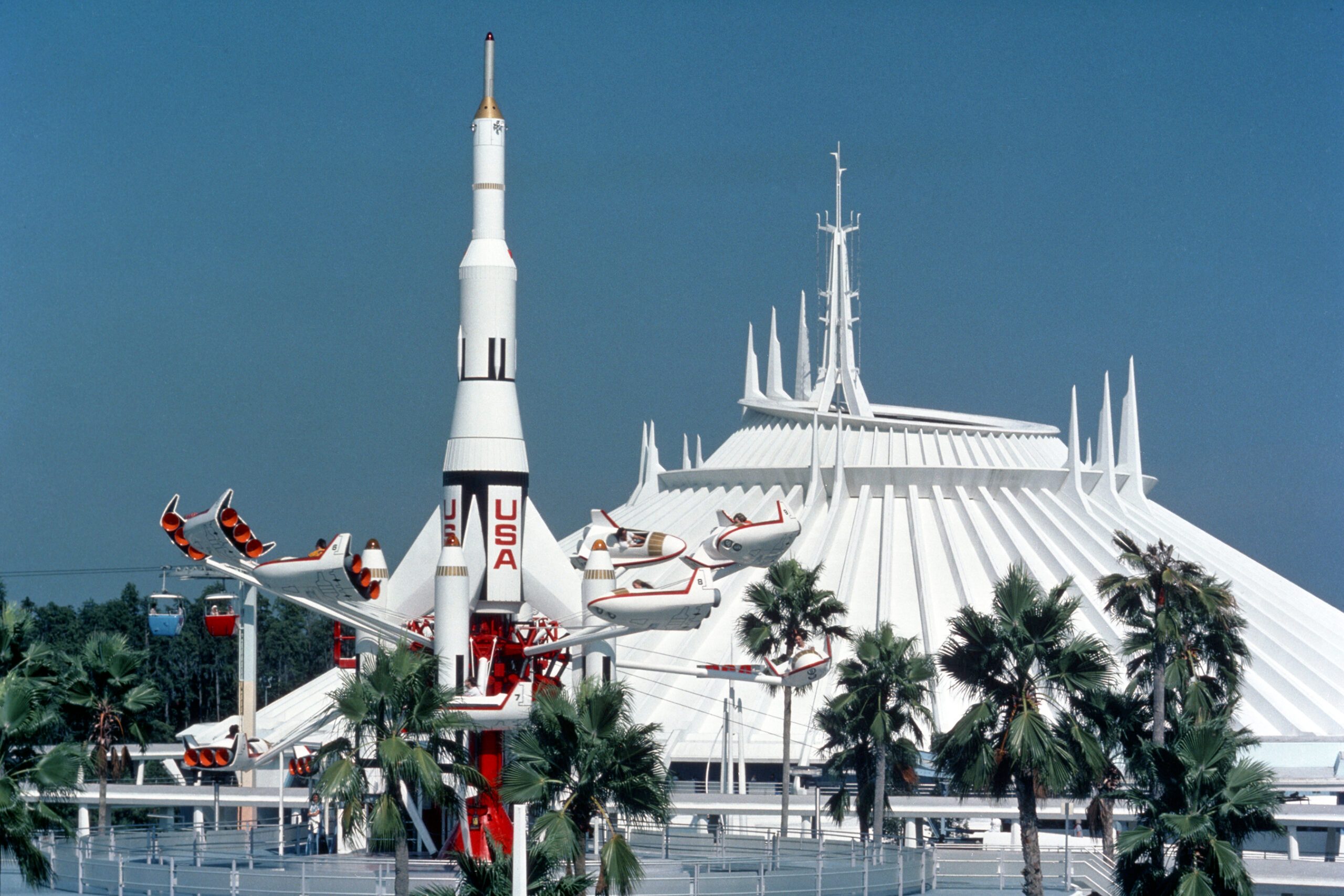 March 22 – Lake Buena Vista Shopping Village opens with 28 shops and four restaurants.  It will evolve over the decades and become The Marketplace at Disney Springs. 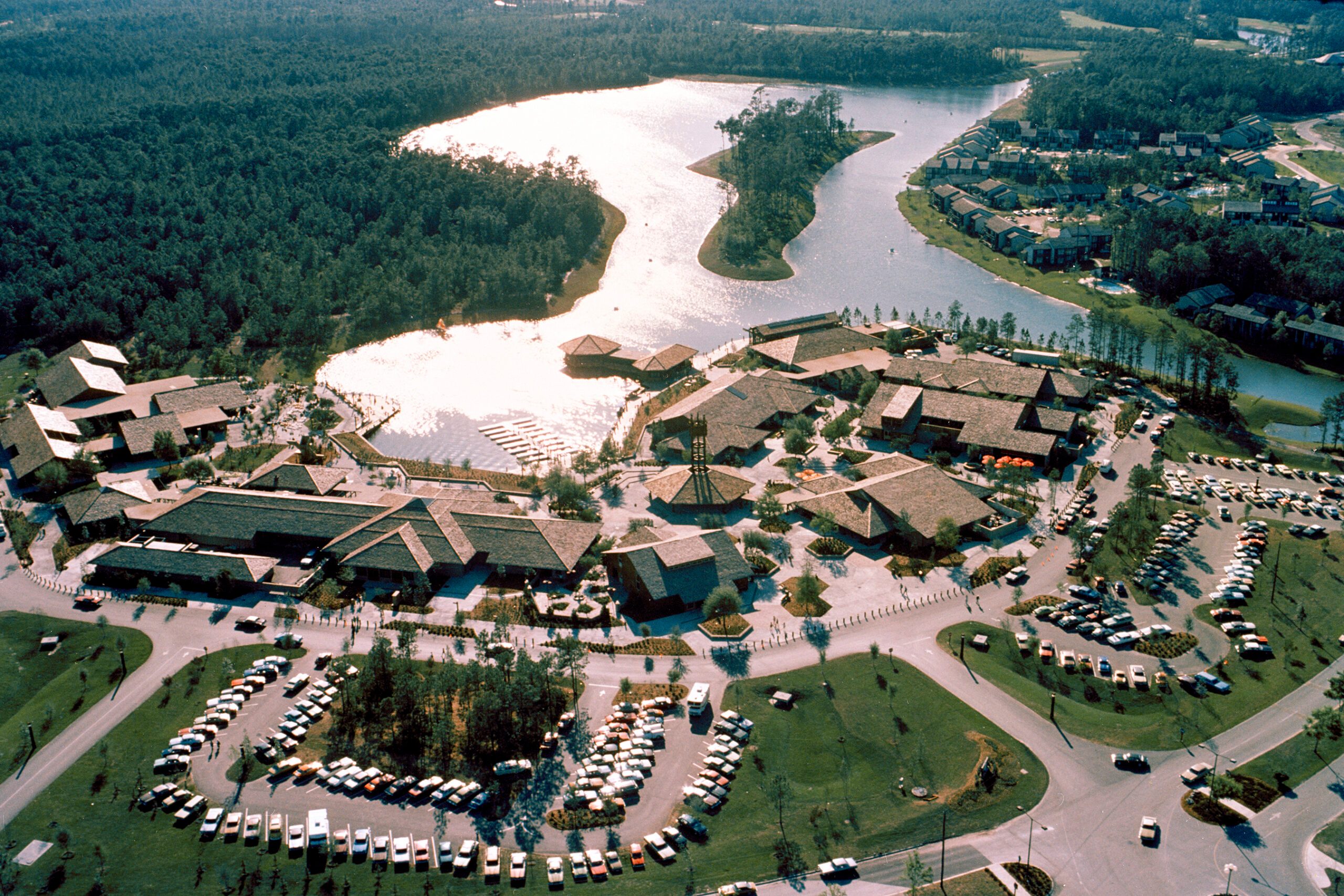 June 7 – Walt Disney World Resort honors America’s bicentennial with America On Parade. With 50 floats and more than 200 performers paying tribute to America’s history, people and traditions, it stands as the largest daily parade ever staged in a Disney park.

June 11 – The Magic Kingdom is aglow as The Main Street Electrical Parade makes its first Florida appearance, which followed its 1972 debut at Disneyland park in California.

Oct. 1 – After years of planning, construction begins on EPCOT. 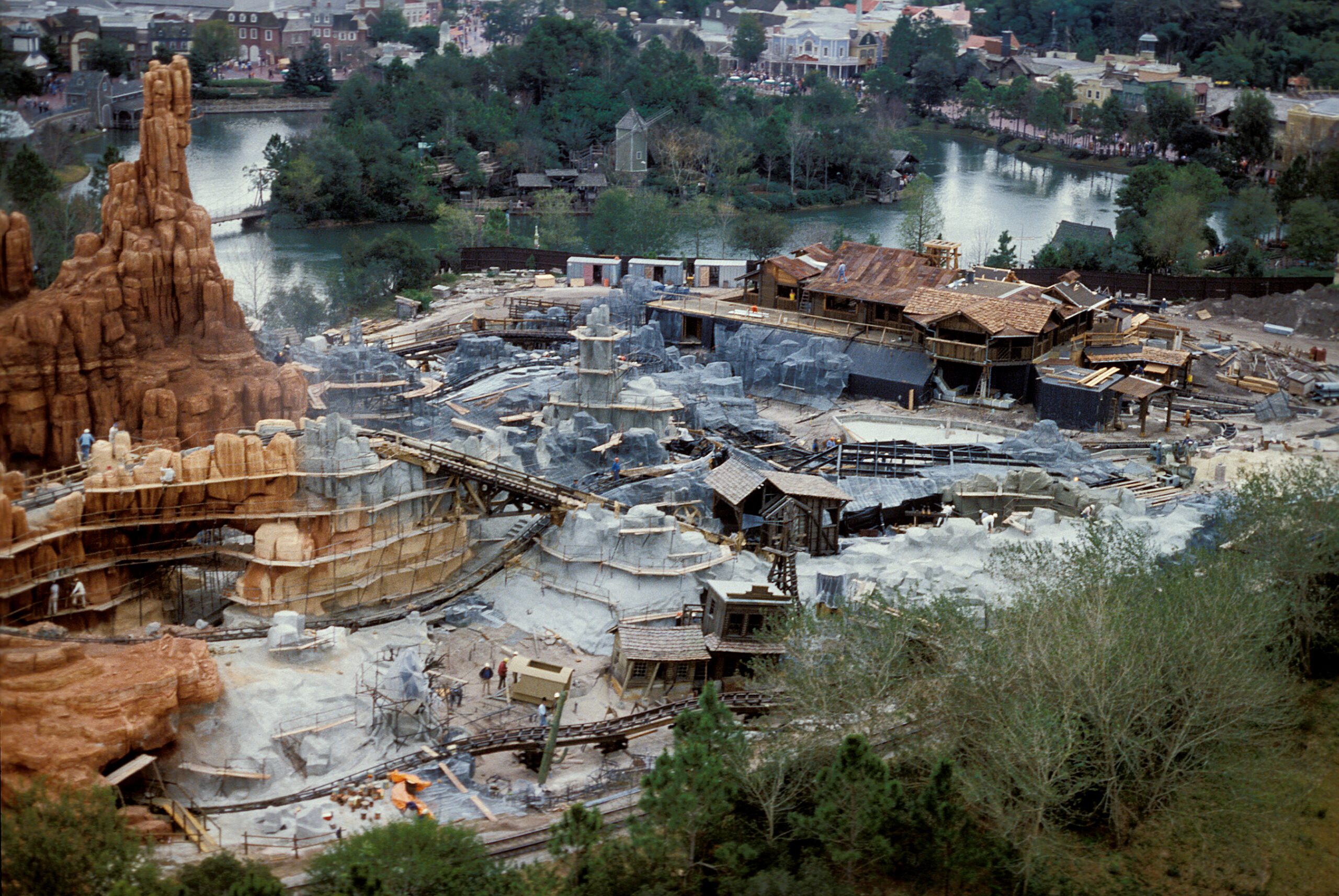 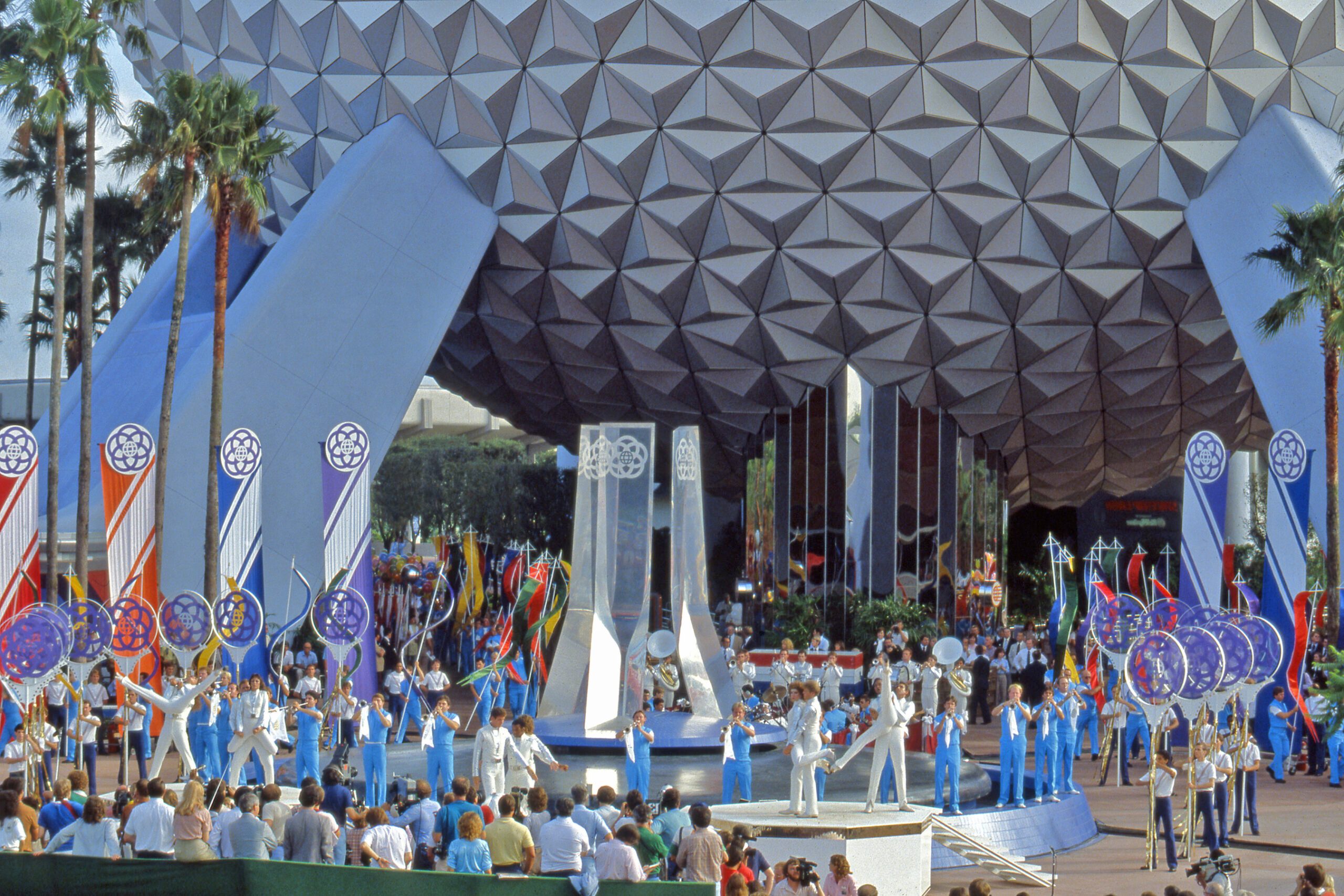 Disney expands its legacy of work with Make-A-Wish as the first wish is grated at Walt Disney World Resort. Since 1982, more than 176,000 life-changing wishes have been granted for children facing critical illnesses in partnership with more than 250 wish-granting organizations around the globe.

Dec. 16 – The first Mickey’s Very Merry Christmas Party is held at Magic Kingdom, starting a tradition of popular Disney After Hours events, combining special entertainment and offerings with extra time in the park.

Dec. 25 – The Walt Disney World Christmas Parade is broadcast live from Magic Kingdom on ABC, going on to become a holiday tradition and growing to include parades and performances from both Walt Disney World Resort and Disneyland Resort.

May 11 – The Disney Dreamers & Doers program begins recognizing young people who demonstrate excellence in their schools, families and communities. Since 1984, Walt Disney World Resort has recognized nearly 14,000 students from public and private schools across Central Florida.

Sept. 7 – EPCOT World Showcase expands with the opening of the Morocco pavilion.

Jan. 15 – The Living Seas (now The Seas with Nemo & Friends) opens at EPCOT, home to more than 200 species of sea life in a 5.7 million-gallon “ocean” of saltwater.

June 3 – EPCOT World Showcase expands with the opening of the Norway pavilion. 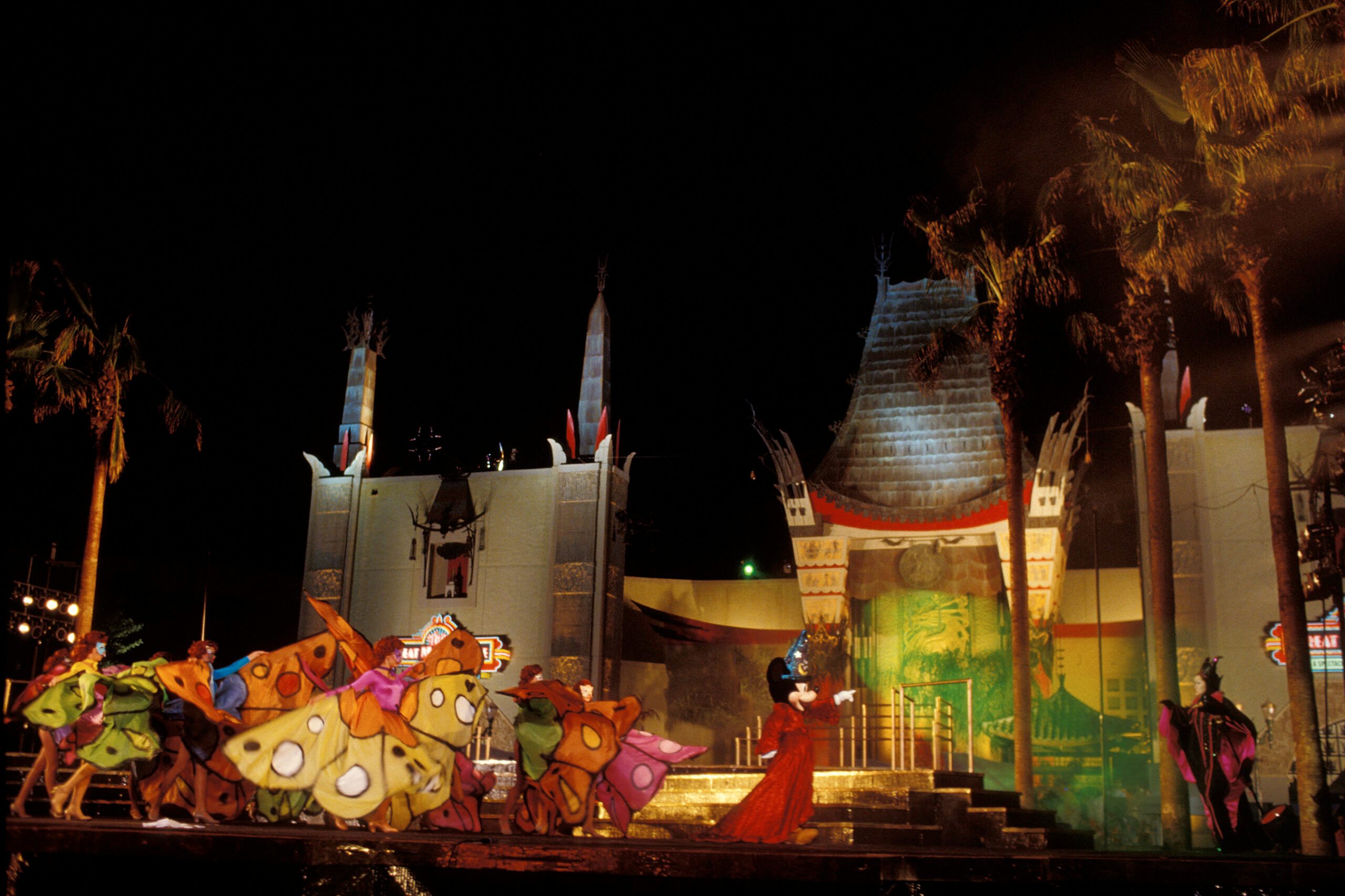 May 1 – The nighttime entertainment complex Pleasure Island opens with a glittering array of restaurants and themed nightclubs. It will close in 2008 to make way for Disney Springs. 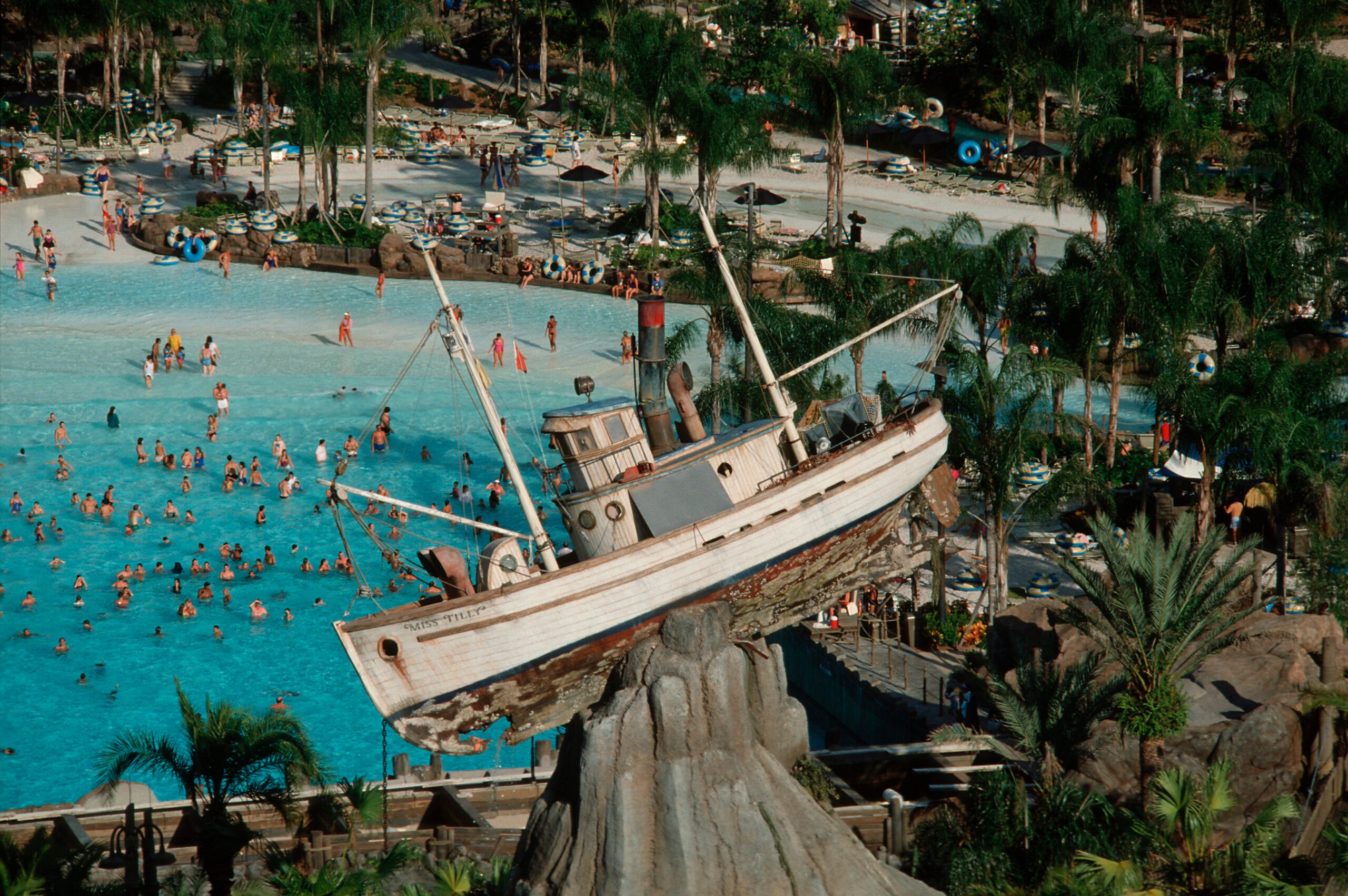 April 23– The Walt Disney Company dedicates 8,500 acres of land purchased at the Osceola-Polk County line to The Nature Conservancy to preserve for future generations as the Disney Wilderness Preserve. 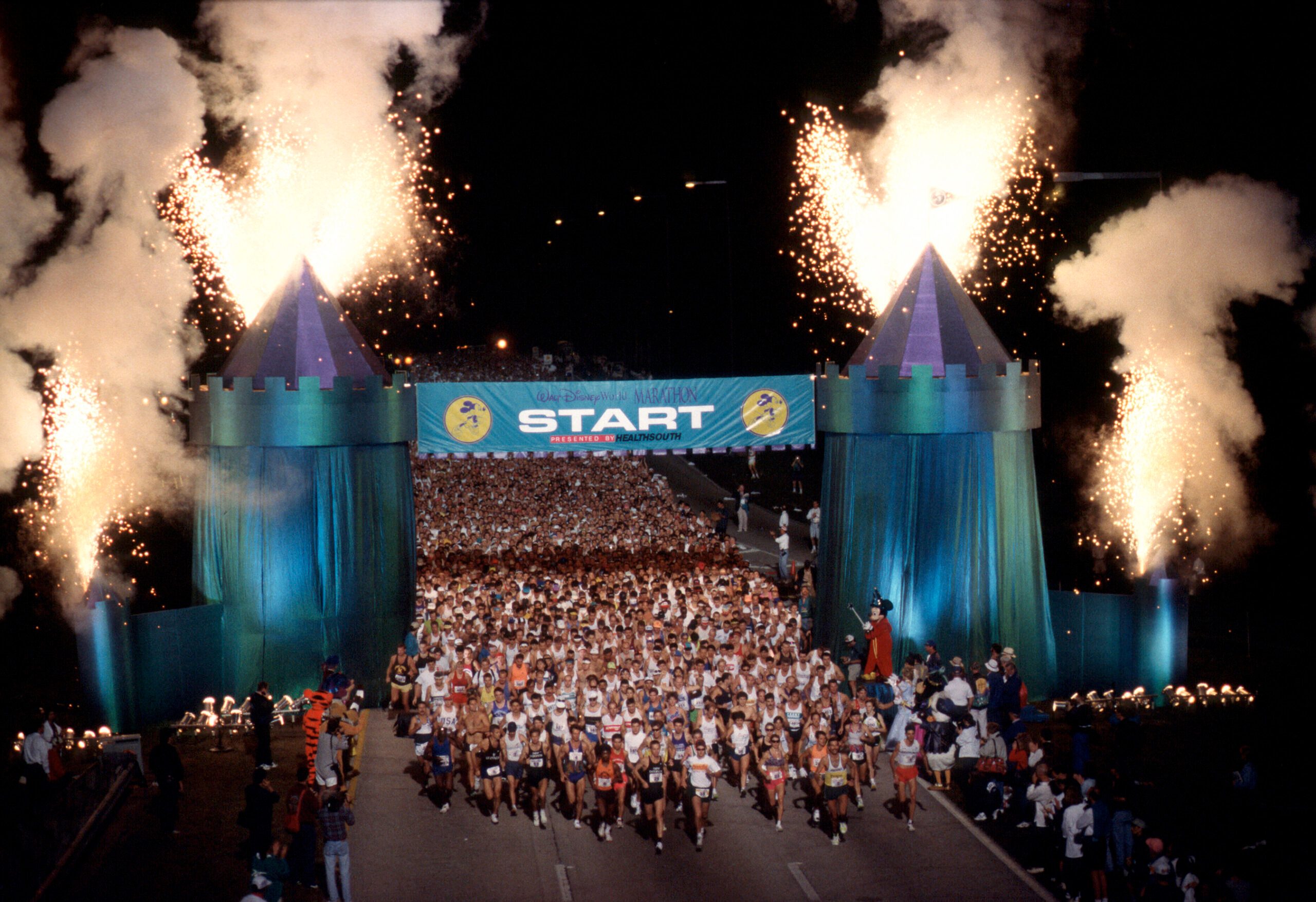 April 29 – The inaugural EPCOT International Flower & Garden Festival debuts. In the years to follow, festivals dedicated to food & wine, the arts and holidays join the lineup.

June 12 – Disney’s Hollywood Studios expands with the opening of its first new themed area, Sunset Boulevard, bringing more shops, dining and entertainment to the park…along with the haunted thrills of The Twilight Zone Tower of Terror (July 22). 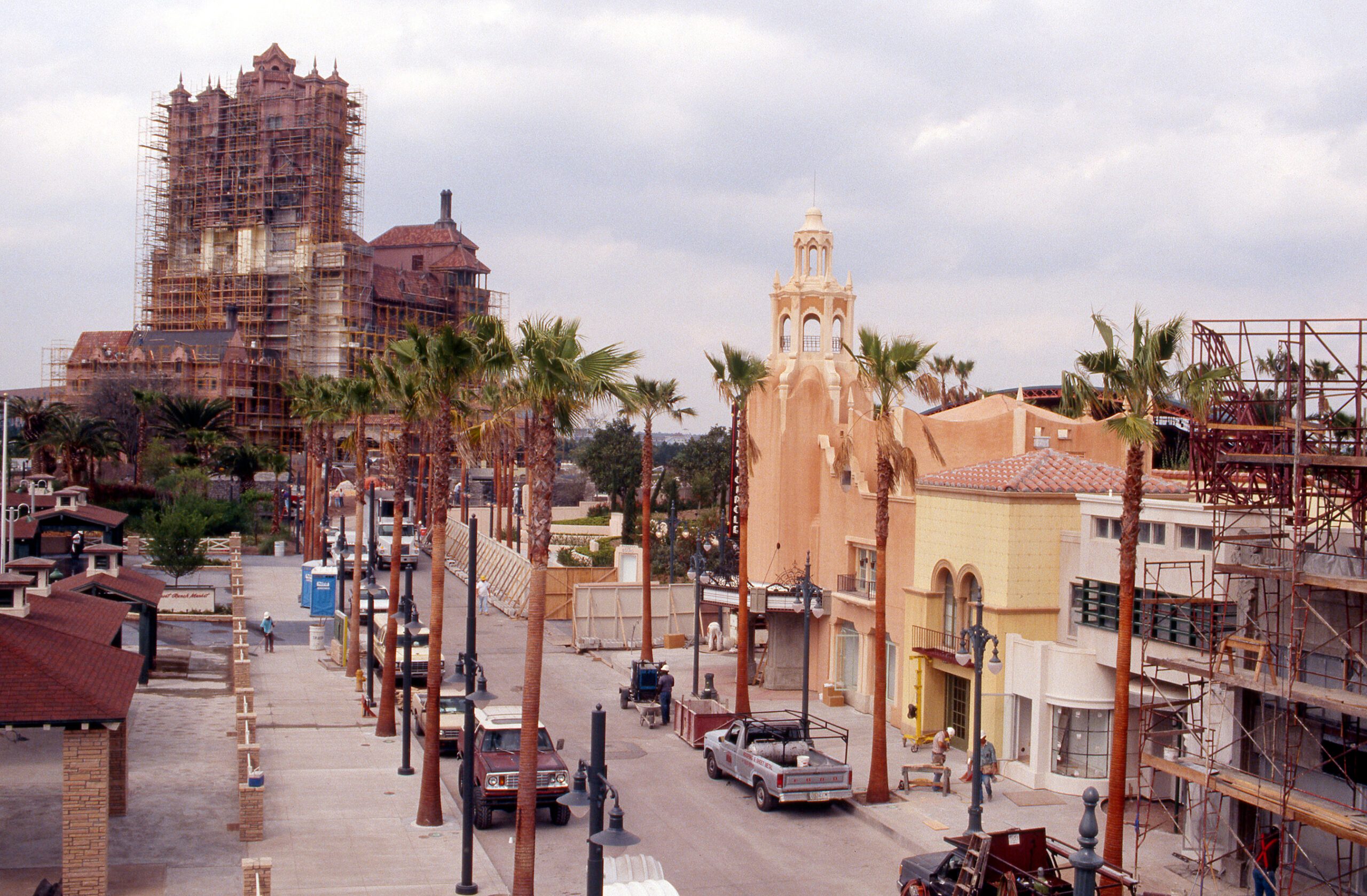 April 22 – The Disney Conservation Fund forms to provide support for respected conservation organizations saving wildlife and protecting the magic of nature. To date, the fund has directed $100 million to support nonprofit organizations working with communities to save wildlife, inspire action and protect the planet.

July 15 – Disney’s Wedding Pavilion opens on the shores of Seven Seas Lagoon, part of a vast expansion of options for weddings and vowel renewals. Today, Disney’s Fairy Tale Weddings & Honeymoons offers a wide range of nuptial and honeymoon planning around the globe.

July 1 – Disney’s BoardWalk Inn and Villas open along with their lively namesake boardwalk that brings new restaurants and nightspots to the EPCOT Resort Area. 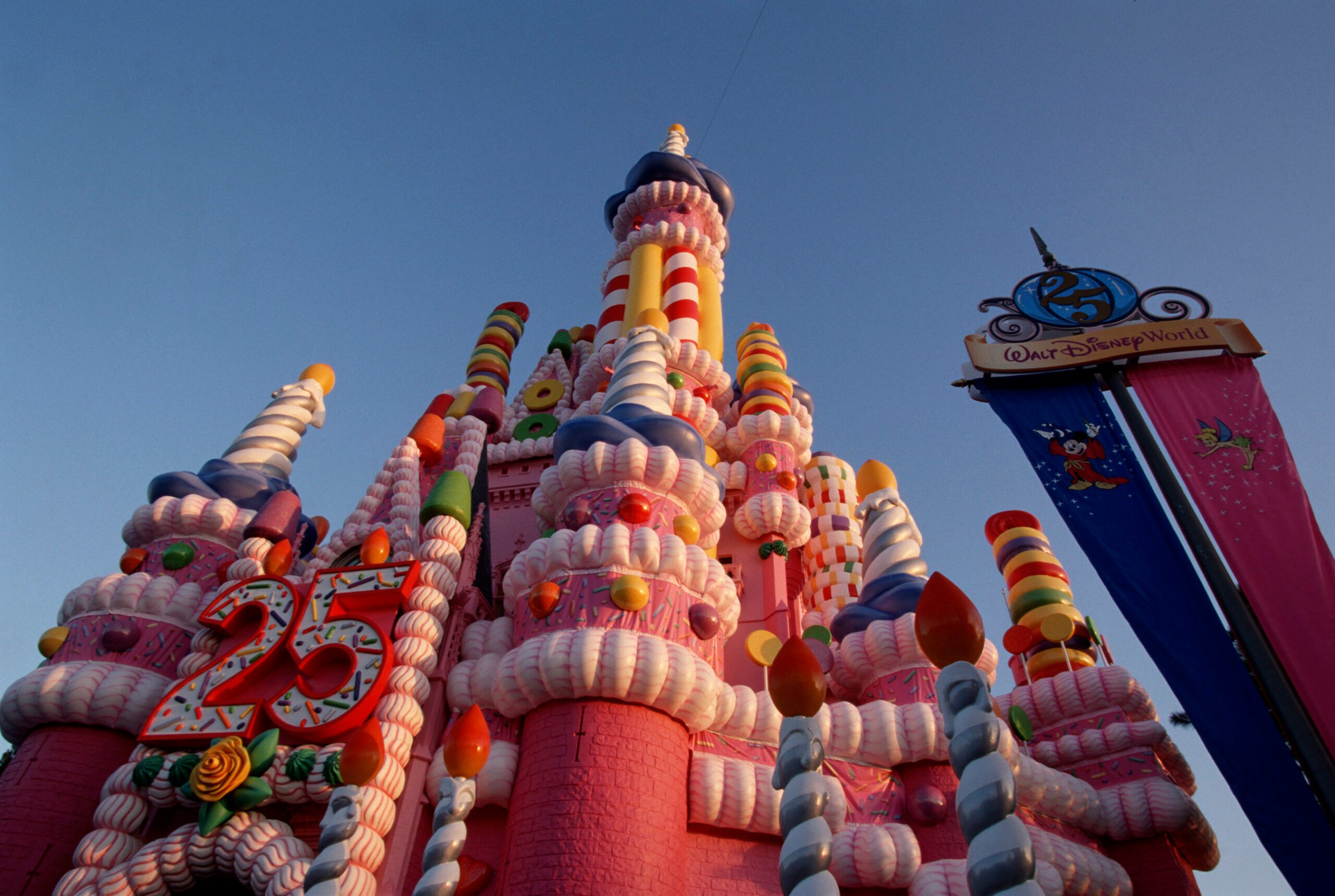 March 28 – ESPN Wide World of Sports Complex opens. The 220-acre complex includes multiple outdoor playing fields, baseball/softball diamonds, a track & field complex, a fieldhouse and a 9,500-seat ballpark. Over the years it will grow to encompass two additional fieldhouses, an ESPN broadcast center and even more outdoor playing fields. It will also serve as an official training site for various American and international professional teams, as well as host of several major sporting events such as the Invictus Games, the 2020 MLS is Back Tournament and the 2020 NBA restart of the regular season.

Aug. 1 – Disney’s Coronado Springs Resort opens. With 1,900 guest rooms and a 220,000-square-foot convention center, it is the largest of the Disney resort hotels that cater to meetings and events.

April 22 – Disney’s Animal Kingdom Theme Park opens on Earth Day. At 500 acres, it is Disney’s largest park and home to approximately 1,800 animals representing 200 species. The park’s icon, the Tree of Life, is a tribute to nature, featuring more than 300 intricately carved animal images. 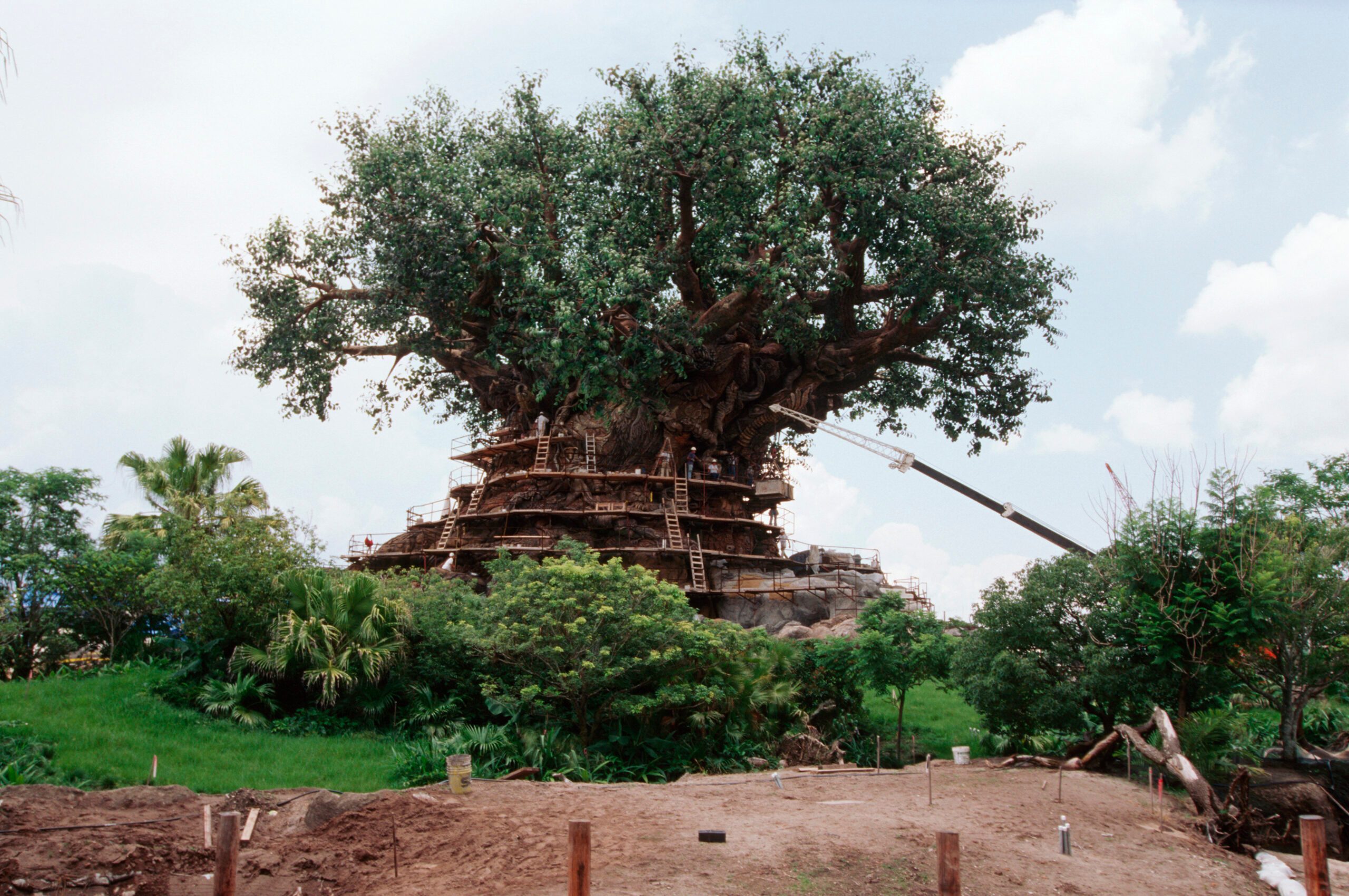 Oct. 1 – The Millennium Celebration begins at EPCOT. The 15-month event marks the debut of the popular nighttime spectacular, IllumiNations: Reflections of Earth, that will run for 20 years. Also new is Millennium Village, celebrating the cultural achievements of 25 countries, and the Tapestry of Nations parade. The celebration also brings pin trading to the forefront for Disney collectors everywhere. 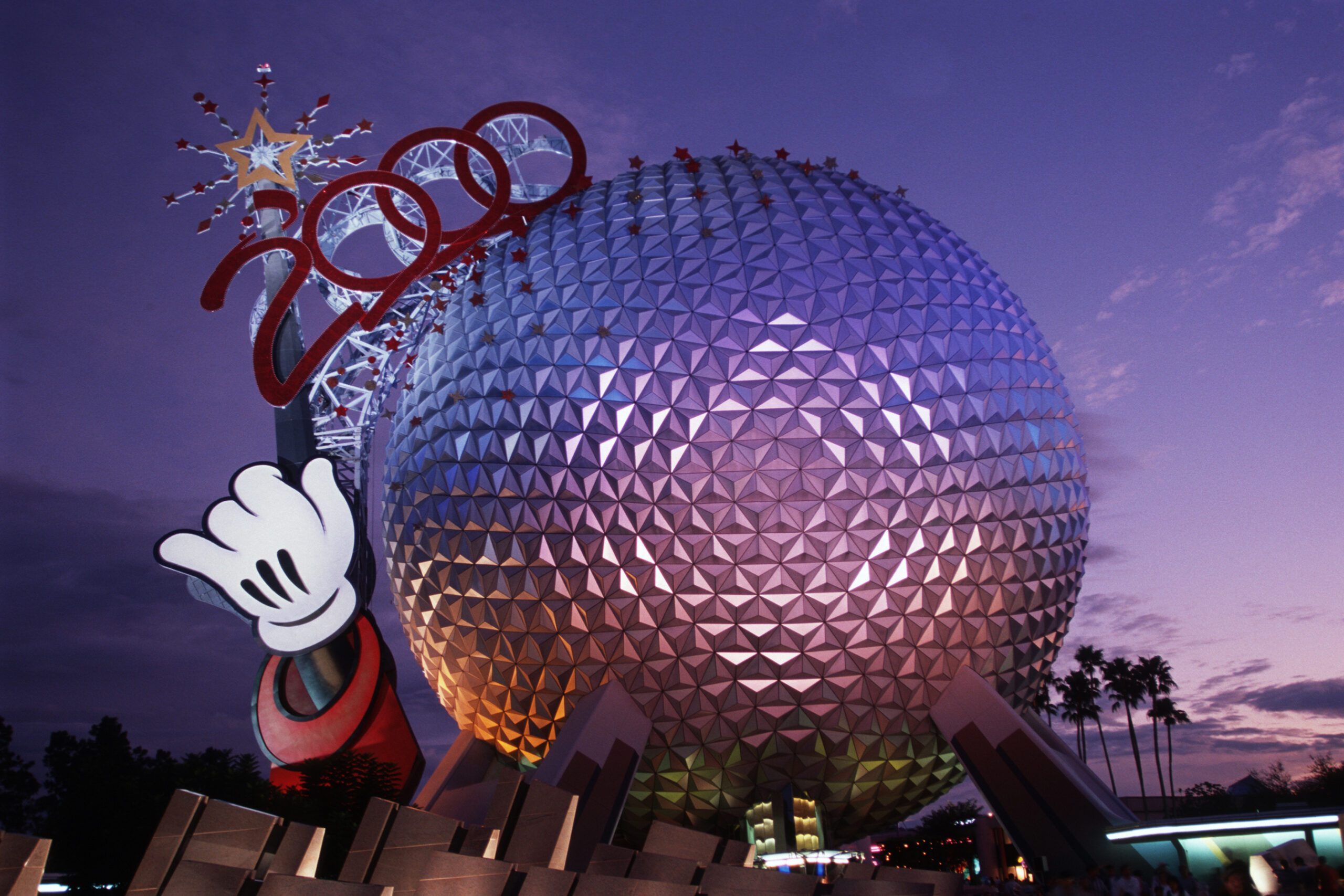 April 16 – Disney’s Animal Kingdom Lodge opens, featuring spectacular views of lush savannas home to more than 200 animals. The resort is also home to one of the largest collections of African art in the United States.

Oct. 1 – 100 Years of Magic Celebration commences, honoring the 100th anniversary of Walt Disney’s birth. New parades debut in all four parks, a 122-foot-tall Sorcerer Mickey hat becomes an icon for Disney’s Hollywood Studios, where Walt Disney: One Man’s Dream also opens to take guests on a journey through the life of Walt Disney. 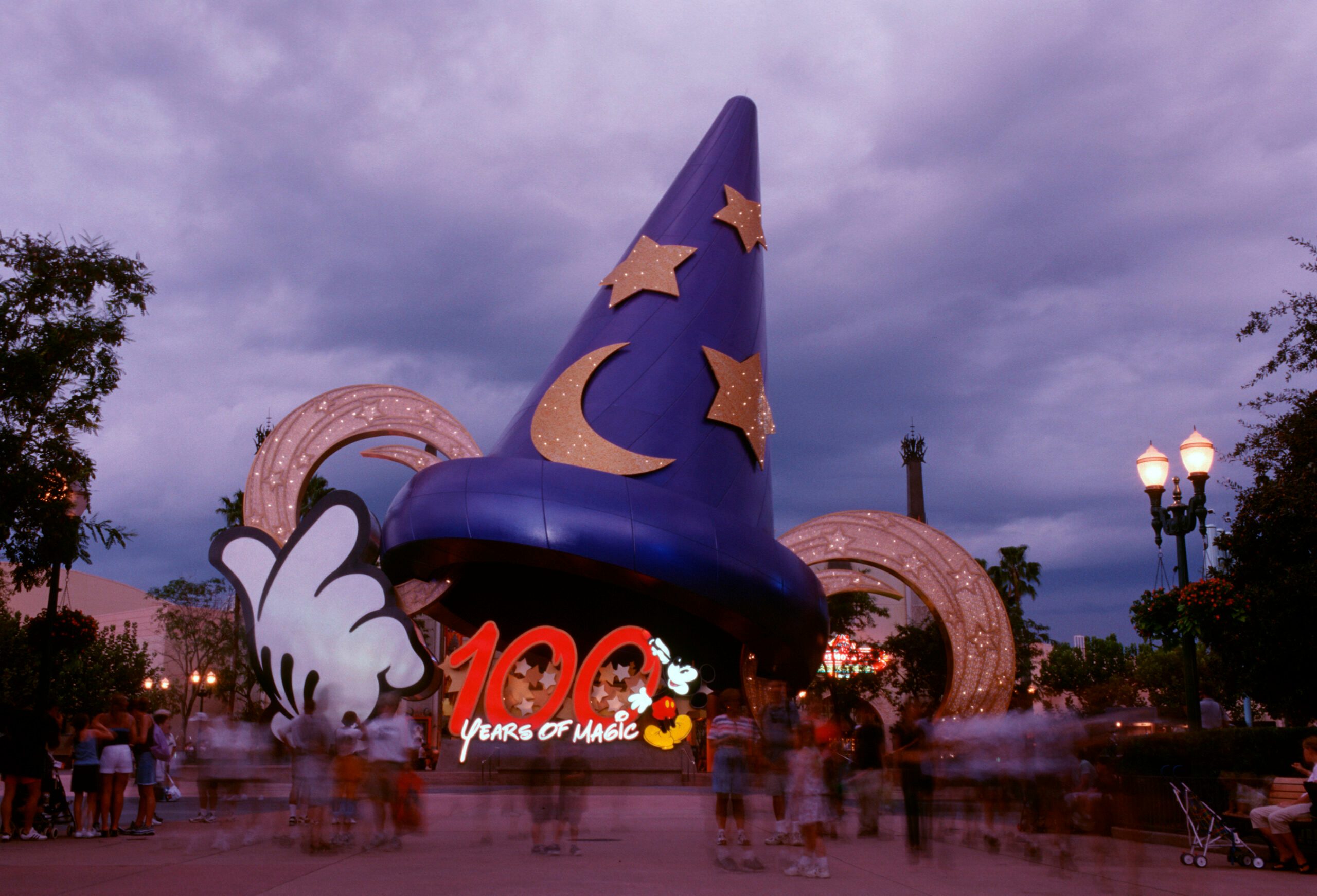 May 5 – Walt Disney World joins in the “Happiest Celebration on Earth,” with Disney parks around the world saluting the 50th anniversary of Disneyland Resort in California. Opening as part of the celebration: Soarin’ at EPCOT and the Lights, Motors, Action! Extreme Stunt Show at Disney’s Hollywood Studios. 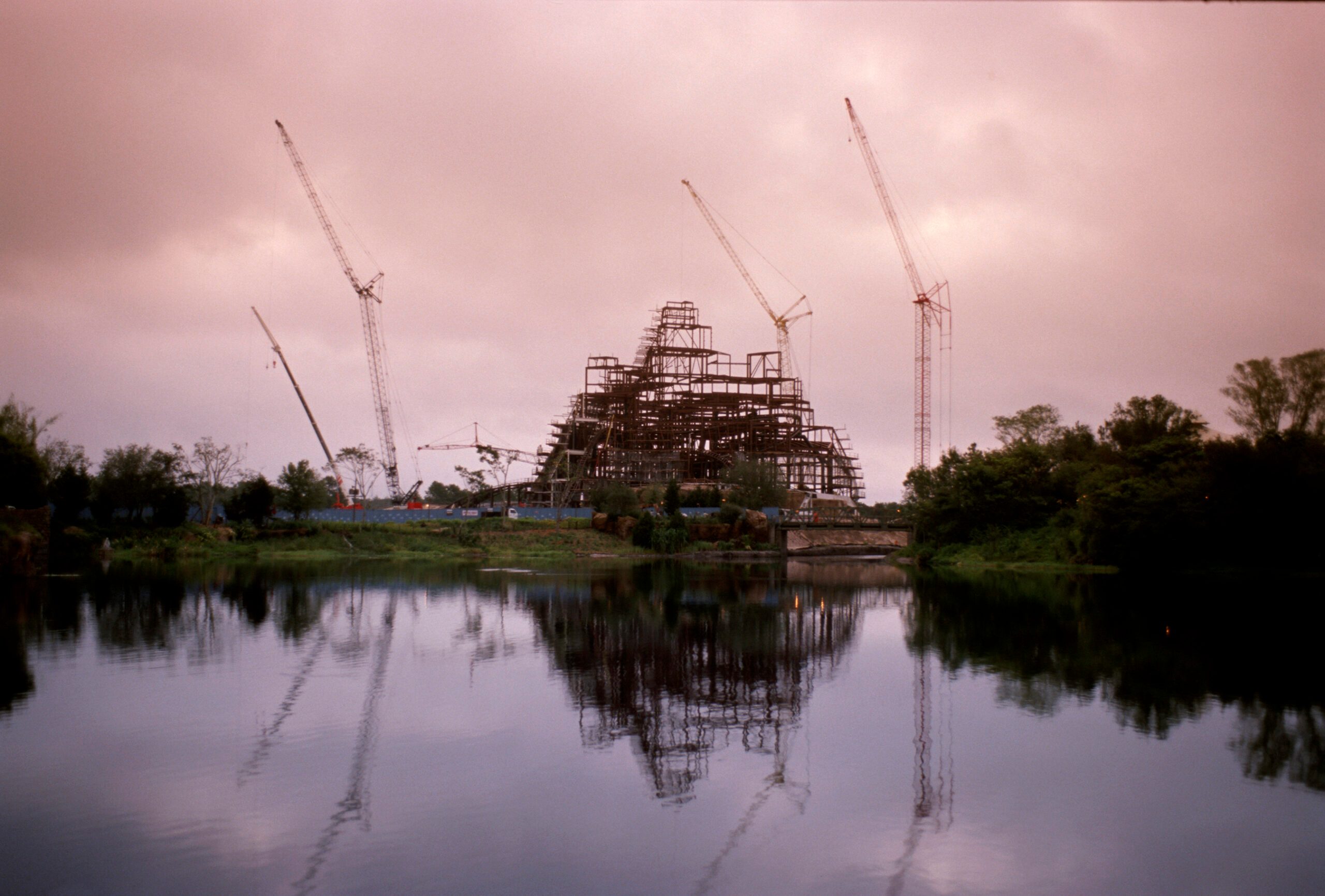 Oct. 1 – “The Year of a Million Dreams” begins at Walt Disney World and Disneyland Resorts. A new “Dream Squad,” randomly selects guests to win an array of prizes. These include priceless, “dream come true” experiences like a night’s stay in the new Cinderella Castle Suite. 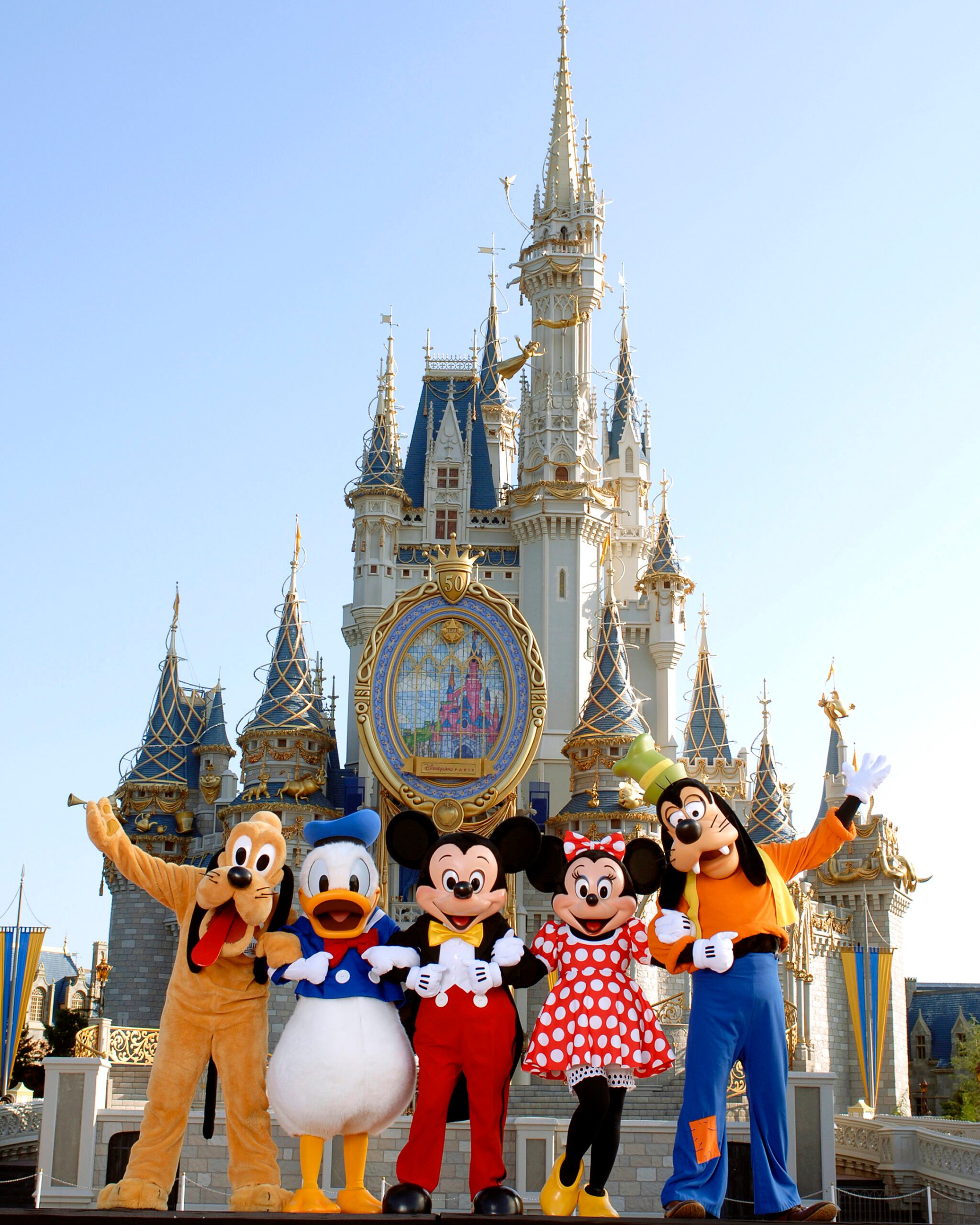 Jan. 17 – The first Disney Dreamers Academy event brings 100 exceptional African American high school students from around the U.S. to a four-day, immersive, transformational mentoring experience at Walt Disney World Resort. Becoming an annual event, the free program has since encouraged more than 1,000 participants to pursue their dreams and make a difference in the lives of others.

May 31 – Disney’s Art of Animation Resort opens with a new style of accommodations – Family Suites for parties of up to six people.

Dec. 6 – New Fantasyland opens at Magic Kingdom Park. The 26-acre expansion of the original land initially includes three new attractions and Be Our Guest Restaurant. Other phases of the new land include Seven Dwarfs Mine Train that opens May 28, 2014. 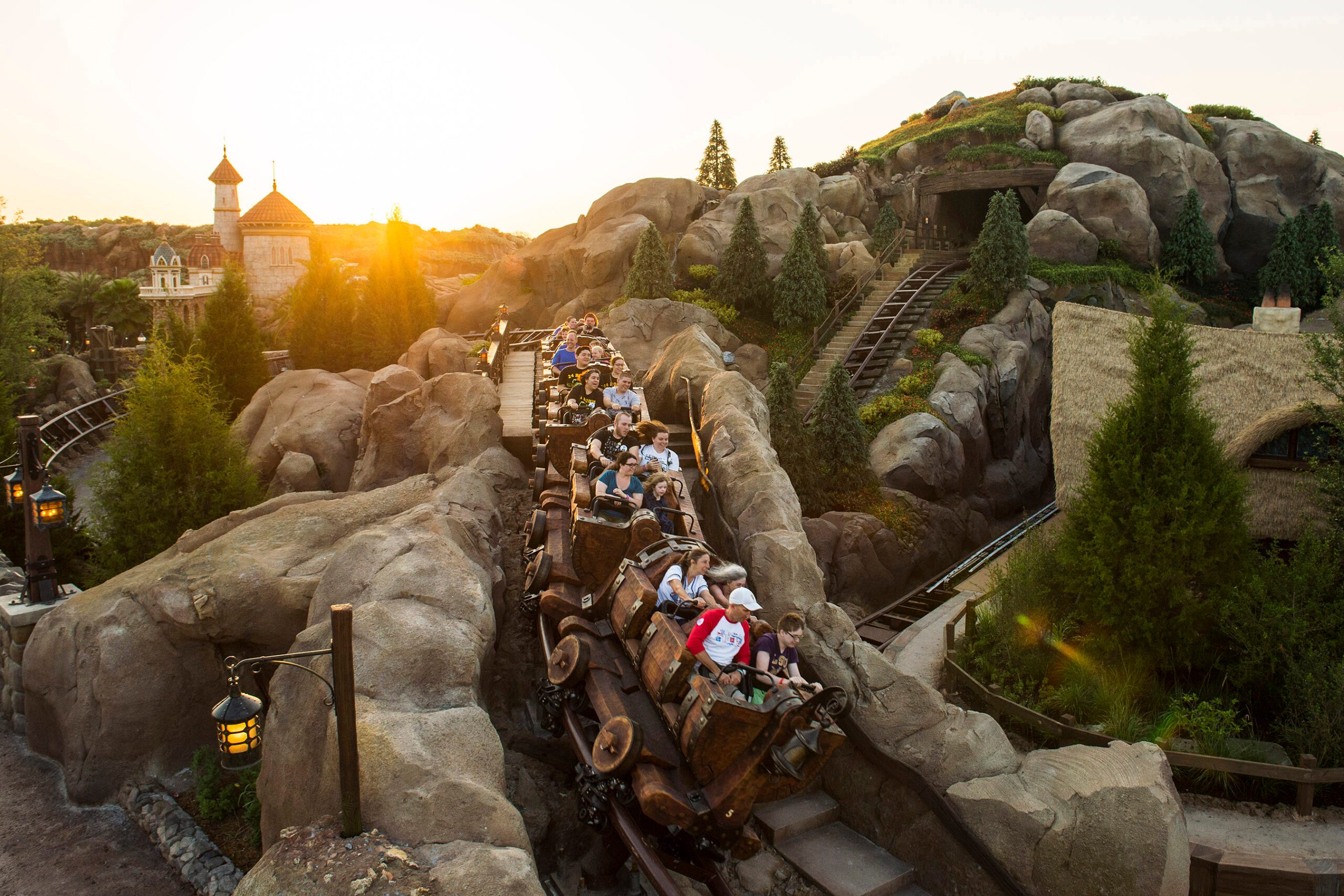 Sept. 29 – Culminating a three-year reimagining of what was previously Downtown Disney, Disney Springs comes to life. The retail, dining and entertainment district will continue to grow, encompassing four “neighborhoods” all themed to Florida towns of the early 20th century. 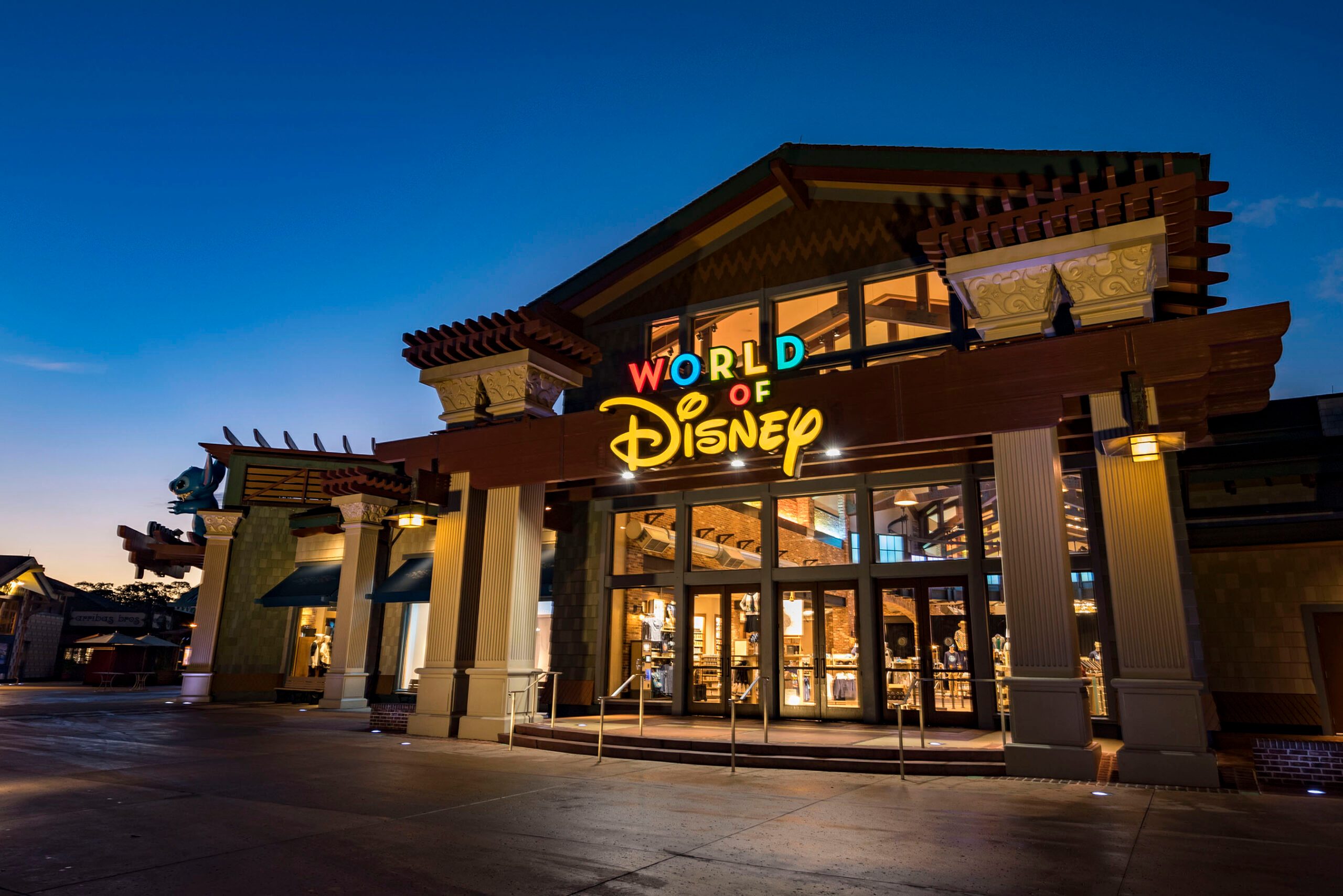 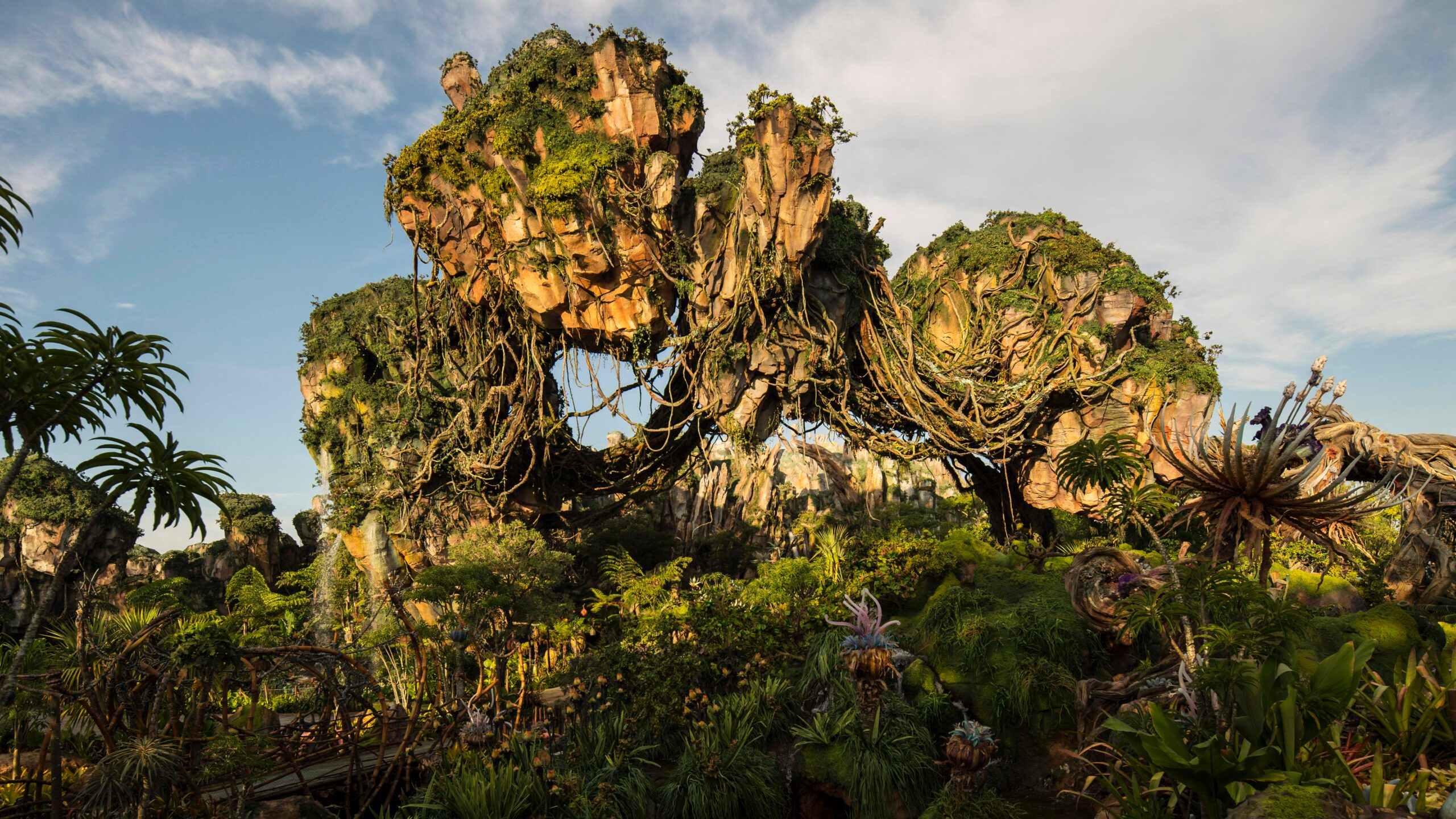 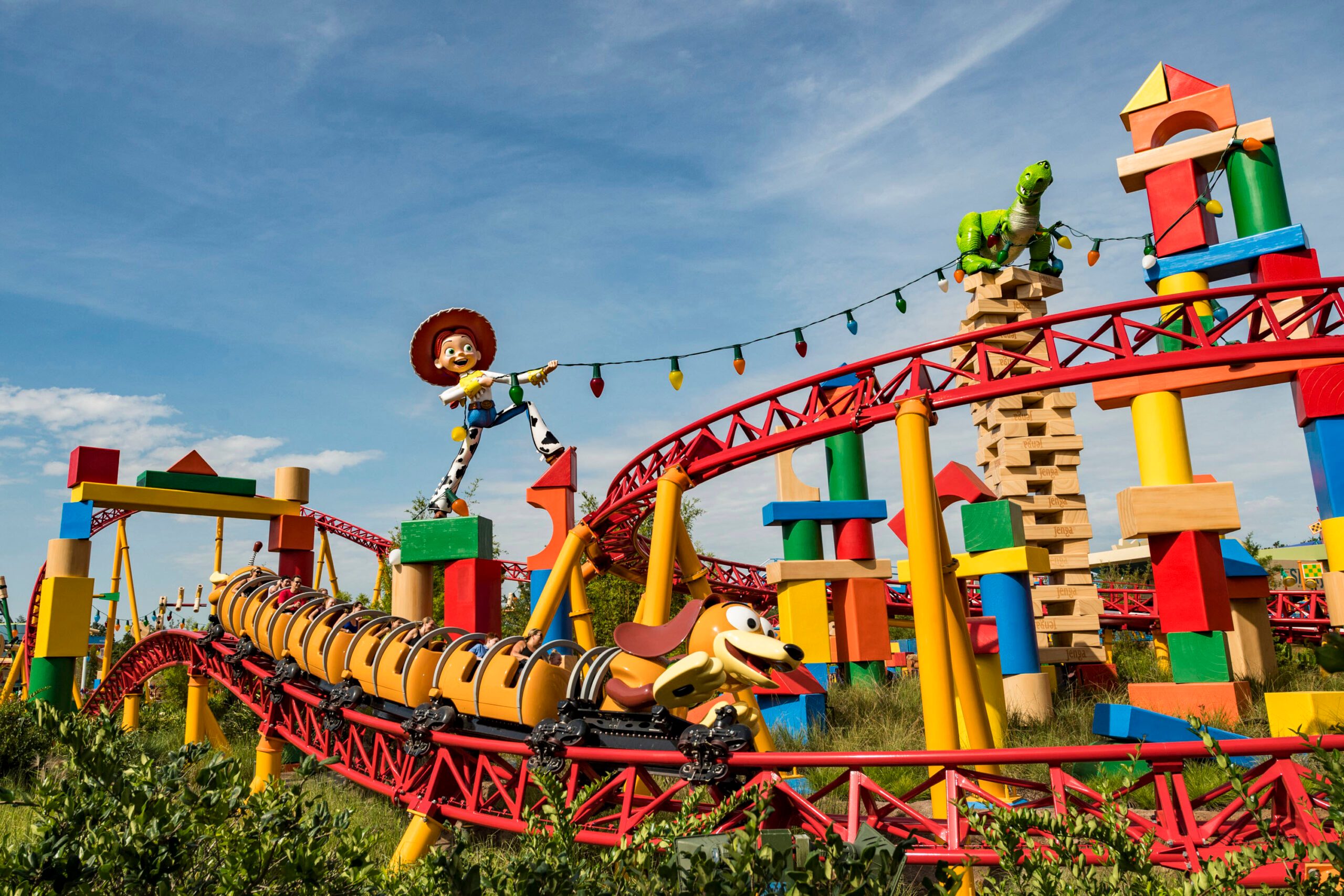 Aug. 29 – Star Wars: Galaxy’s Edge opens at Disney’s Hollywood Studios. The 14-acre land invites guests to experience their own Star Wars stories like never before. One of the most ambitious and technologically advanced attractions created for a Disney park, Star Wars: Rise of the Resistance opens Dec. 5 inside the land. 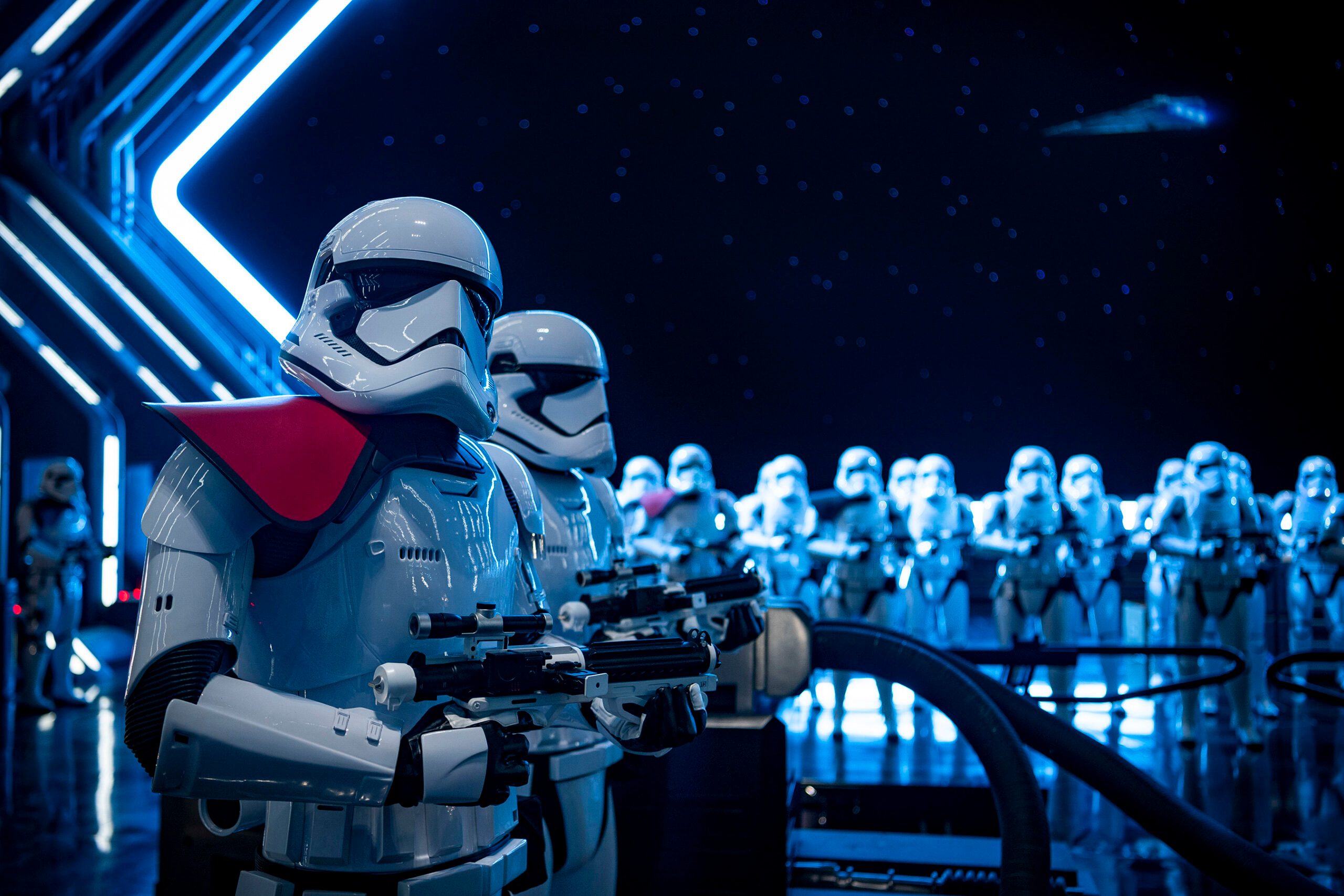 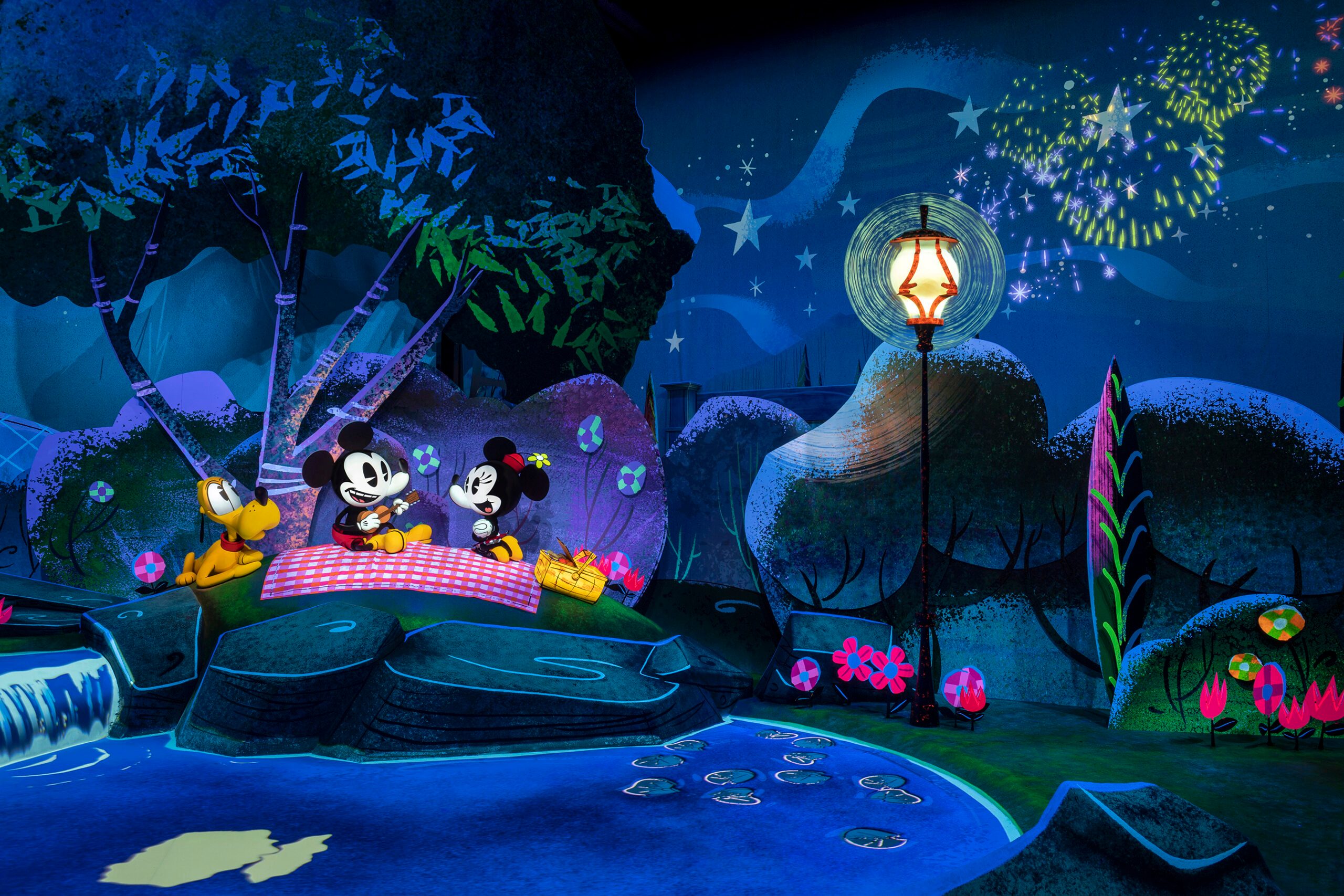 Oct. 1 – “The World’s Most Magical Celebration” will begin, saluting the 50th anniversary of Walt Disney World Resort. The 18-month event will feature new experiences at all four theme parks and beyond, with shimmering EARidescent décor.