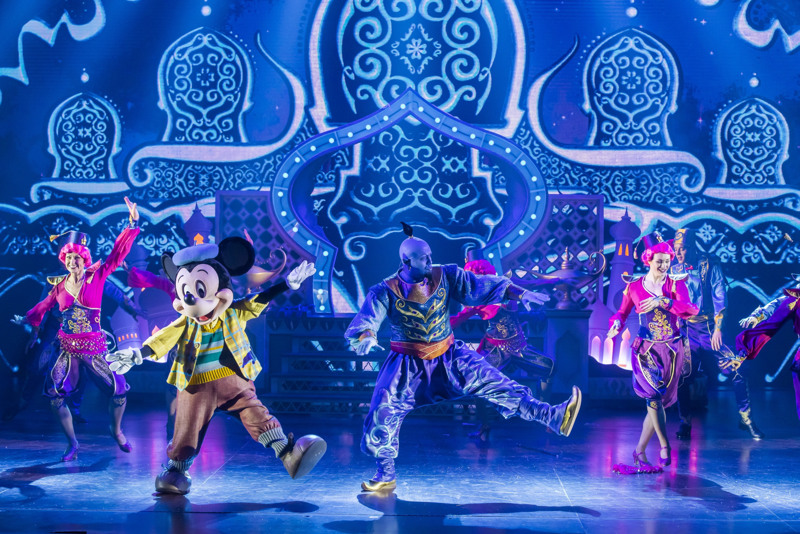 This show has been running for the following years: 2016 -

Mickey and the Magician is a stage show in Animagique Theater at Walt Disney Studios Park, Disneyland Paris. Guests will have the opportunity to travel back in time, to Paris at the turn of the 19th century. They will get a peak at a Magician’s atelier. His assistant is no other than Mickey. The Magician gives Mickey the task to clean up the atelier before sunrise. But unfortunately for Mickey, Tinker Bell has spread some stardust, and Mickey gets distracted. Together with guests he is transported to several Disney worlds.

The entire show has loads of magic and surprise. And will keep you asking for one more performance.

Mickey and the Magician Scenes Explained

In the opening scene we get to know the Magician and his apprentice: Mickey. The Magician walks around his atelier and when he performs some of his magic, Tinker Bell appears and she spreads stardust.

Mickey walks in and gets the task to clean-up the atelier before the moon disappears from the sky. Mickey actually wants to become a magician too, but that has to wait. Just before the Magician leaves he tells Mickey: “Remember, a true magician always keeps his promise”.

When the Magician leaves, a hat starts talking to Mickey, and Mickey tells the hat he is a magician. The hat doesn’t believe him, and there is a fun little back-and-forth between them.

When Mickey tidies up the house, he sees a sheet half over the chair, when he places it all over the chair, the Fairy Godmother appears. While she is looking for her wand, she tells Mickey she has heard a lot about him. Mickey says he still needs a lot of practice before he becomes a magician. Good thing that the Fairy Godmother has a good song to help Mickey a bit. And while they sing “Bibbidi-Bobbidi-Boo”, Cinderella’s dress appears, and not long after Cinderella appears through some magic.

After a short dance, Cinderella’s coach appears and she goes off to the ball. The fairy Godmother leaves Mickey with the following saying: “Have faith in your dreams, and you will find what you seek: the magic that lives within you.” And through some form of magic, she disappears from stage. 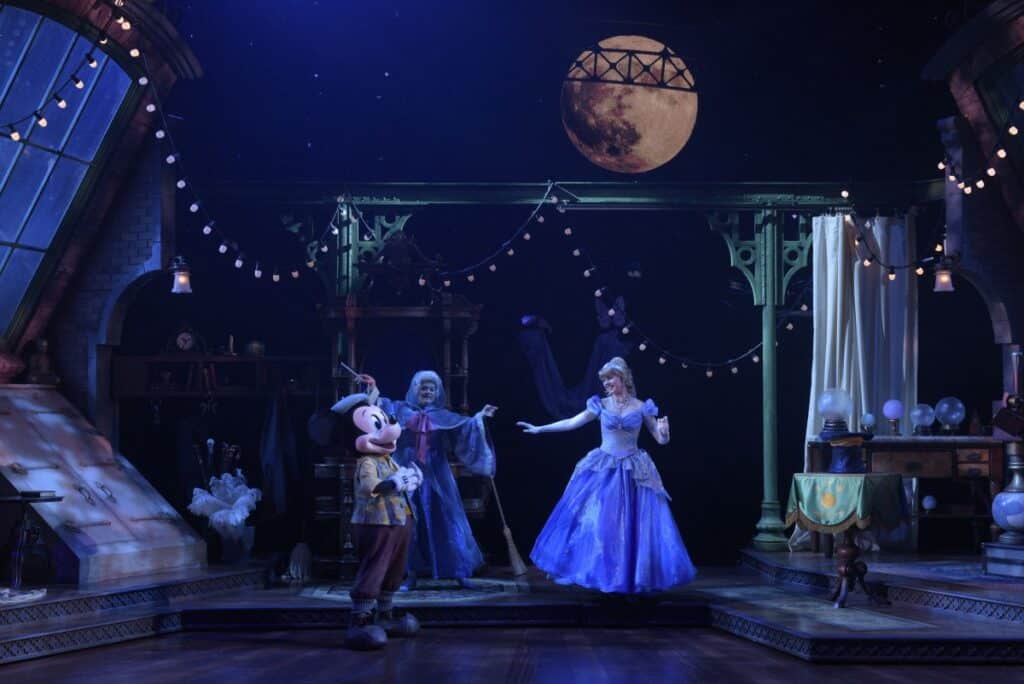 While Mickey has a chat with the talking hat, part of the moon disappears, urging Mickey to start working again.

Music: Bibbidi-Bobbidi-Boo (French), A Dream is a Wish Your Heart Makes (English)

Scene 3 – Beauty and the Beast

As Mickey continues to clean, a sneezing Lumière appears. Mickey wants to know who he is, and as soon as he states his name, he asks Mickey to help set the banquette. The dishes appear and dance while they set the table.

After that the magic continues with Belle and the Beast, dancing through the atelier which now seems more like the Beast’s castle.

Lumière tells Mickey: “You see my friend, true magic lives in our hearts”. And the atelier appears again. While Mickey keeps on dancing to the music, the Magician knocks the door to ask how it is going. The moon slightly disappears again.

Music: Be Our Guest (English), Beauty and the Beast (French)

Mickey continues cleaning, and while he sweeps the floor, and flies around on the broomstick he pushes a zoetrope that shows animals When he closes a curtain to beat the dust out of it, Rafiki appears and starts singing. When Mickey asks her who she is, she asks Mickey the same question. Several wild animals appear on stage. When Circle of Life starts, more animals appear on the stage and walk through the audience. 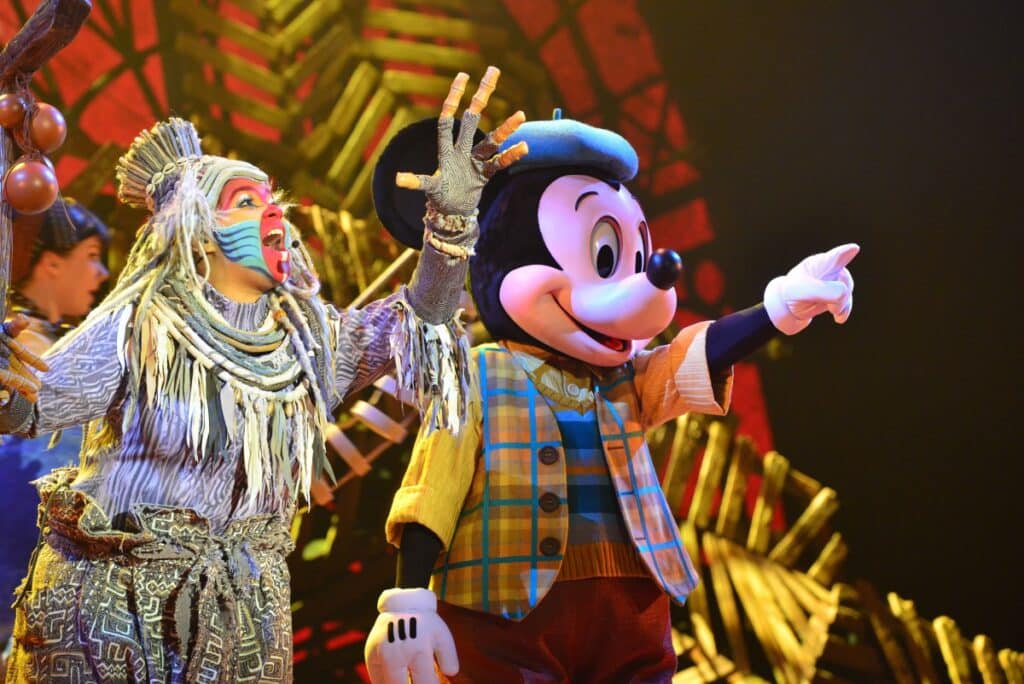 Rafiki tells Mickey she is here to show him the world: “You can run from it, or learn from it.” After that Rafiki climbs Pride Rock, and keeps singing to the animals and Mickey.

After Rafiki and the animals leave, the talking hat starts making animal noises. He asks Mickey to guess them. Soon after the moon disappears a further.

While Mickey keeps cleaning, he picks up a lamp, and rubs it. And you know what this means. Not much later Genie appears. And Genie would not the Genie if he doesn’t show Mickey some magic. Several dancers appear on stage to help the Genie perform some magic which amazes both Mickey and the audience.

After the Genie disappears and the atelier appears again, Mickey is trying to get the Genie pack by talking to the lamp.

Mickey finds a snow globe and when he shakes it, Olaf appears. And of course Olaf likes warm hugs. Mickey explains Olaf that he wants to become a great magician. As Olaf is thinking whether he likes summer more than magic. He figures out magic is what brought him hear.

When Elsa appears, Olaf explains her that Mickey wants to be a magician, but that he can’t find his magic. And here comes Elsa, explaining to him that he will find it. Snow starts falling.

As Mickey thinks he has found the magic, and we see his broomstick make little circles, the atelier falls to pieces. Than the Magician appears and wants to know from Mickey what has happened. Mickey explains that he is not good at magic. The Magician tells Mickey that a real magician always keeps his promise and he hands Mickey his wand. Together with the Magician, Mickey uses magic to tidy up the atelier. 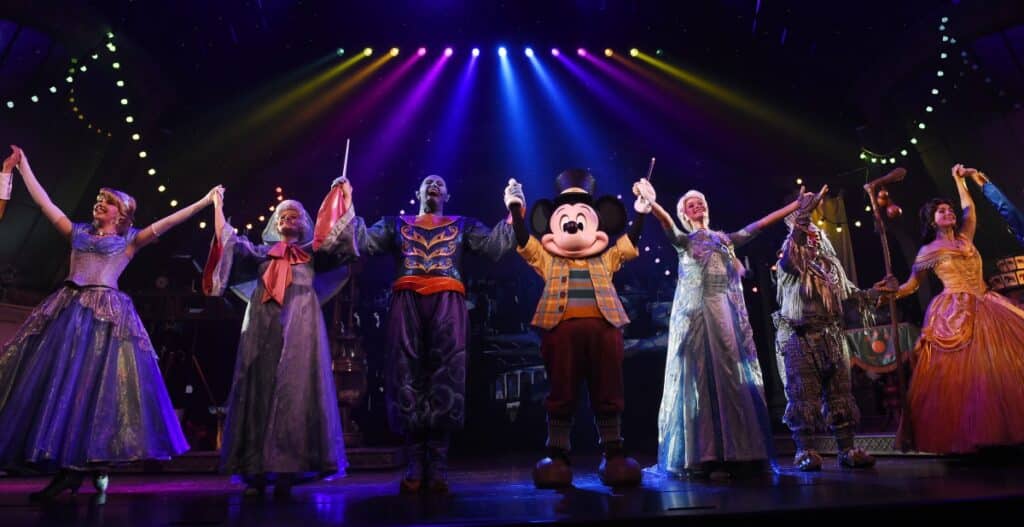 The Great Magician thinks Mickey is ready, and Mickey takes the talking hat, and makes it float. After that the Magician helps Mickey set it on his head.

All characters we saw during the show now appear back on stage, and they all sing the theme of the show: Let the Magic Shine. Then Mickey can perform his own magic and makes the Great Magician disappear. He flies to the sky and appears on the moon.

Music: The Reprise of Let the Magic Shine

Mickey and the Magician Concept Art

When Mickey and the Magician was being developed, concept art was created. This gives you an idea of how a scene would look like on stage. 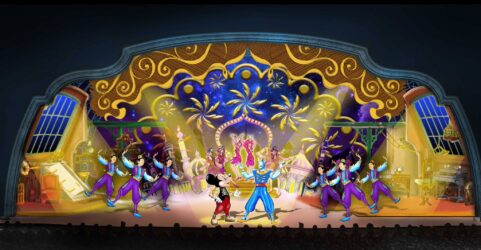 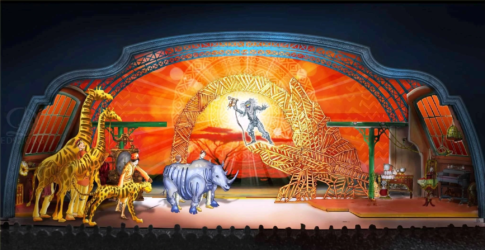 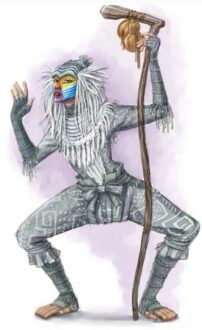 Watch Mickey and the Magician

Mickey and the Magician Facts