Along with the announcement that Disney Genie Service is coming to Disney World and Disneyland Resort this fall, it was also announced that FASTPASS, FastPass+, and Disney MaxPass services will be replaced with Disney Genie+ Lightning Lanes. 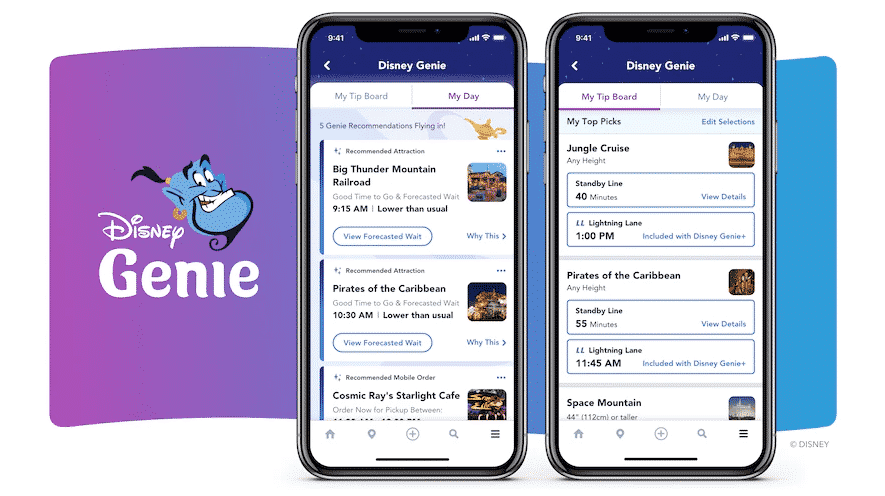 For the price of $15 per ticket per day at Walt Disney World Resort and $20 per ticket per day at Disneyland Resort, choose the next available time to arrive at a variety of attractions and experiences using the Lightning Lane entrance. You can make one selection at a time, throughout the day – from classics like Haunted Mansion to thrill rides like Big Thunder Mountain Railroad and newer favorites like Millennium Falcon: Smugglers Run (attractions subject to limited availability).

This option is the next evolution of the fan-favorite Disney MaxPass service from Disneyland Resort. Disney Genie+ will also include Disney parks-themed audio experiences and photo features to capture your memories – augmented reality lenses for those visiting Walt Disney World Resort and unlimited Disney PhotoPass downloads from your day if you are visiting Disneyland Resort.

Schedule a time to arrive at up to two highly demanded attractions each day using the Lightning Lane entrance – like Seven Dwarfs Mine Train at Magic Kingdom Park and Radiator Springs Racers at Disney California Adventure park (subject to limited availability; attractions not included with Disney Genie+). Pricing for this option will vary by date, attraction, and park and will be announced closer to launch.

Lightning Lane selections will be made on the same day of your visit and can be used across multiple theme parks, great for those who love the Park Hopper option. Attractions continue to offer a traditional standby queue, or a virtual queue at certain attractions like Star Wars: Rise of the Resistance – to maximize flexibility.